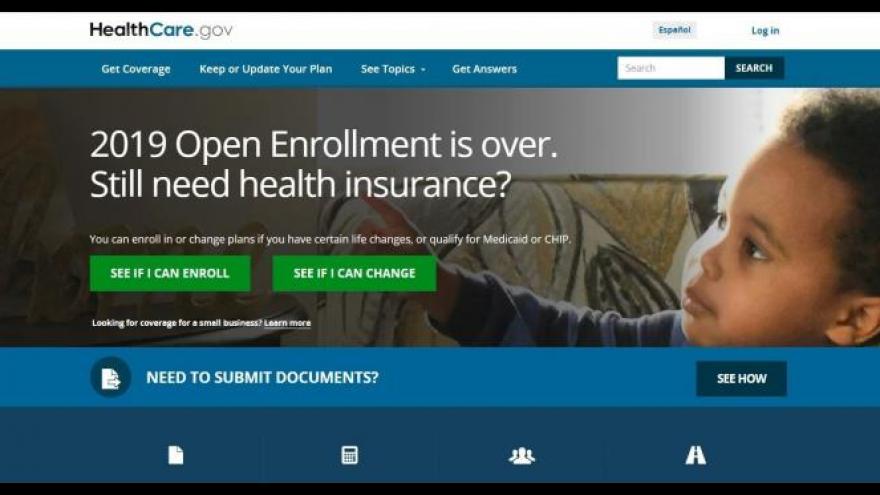 The Trump administration said the entire Affordable Care Act should be struck down, in a dramatic reversal.

(CNN) -- The Trump administration on Monday said the entire Affordable Care Act should be struck down, in a dramatic reversal.

In a filing with a federal appeals court, the Justice Department said it agreed with the ruling of a federal judge in Texas that invalidated the Obama-era health care law.

In a letter Monday night, the administration said "it is not urging that any portion of the district court's judgment be reversed."

"The Department of Justice has determined that the district court's comprehensive opinion came to the correct conclusion and will support it on appeal," said Kerri Kupec, spokesperson for the Justice Department.

It's a major shift for the Justice Department from when Jeff Sessions was attorney general. At the time, the administration argued that the community rating rule and the guaranteed issue requirement -- protections for people with pre-existing conditions -- could not be defended but the rest of the law could stand.

After the Justice Department took that position, federal District Judge Reed O'Connor struck down the entire law and the case is currently before a federal appeals court.

Trump and the administration repeatedly promised -- particularly leading up to the midterm election -- to protect people with less-than-perfect medical histories.

But this shift in the Justice Department's stance doubles down on stripping away all the protections that were a hallmark of the landmark heath reform law.

The administration's move didn't only startle supporters of the law. One former official who worked under Sessions told CNN Monday night that he, too, was surprised by the new position.

Because the case is before one of the most conservative appellate courts in the country, it almost guarantees that the issue will return to the newly solidified conservative Supreme Court at some point. President Barack Obama's former solicitor general, Donald Verrilli -- who once defended the law before the Supreme Court -- is now defending the law on behalf of the Democratic-led House.

Overturning the law would have far-reaching consequences -- way beyond disrupting coverage for the millions of people who get their health insurance on the exchanges or through Medicaid expansion.

Obamacare saves senior citizens money on their Medicare coverage and prescription drugs. It lets many Americans obtain free birth control, mammograms and cholesterol tests. And it allows children to stay on their parents' health insurance plans until they turn 26.

And, even the Trump administration is using the landmark health reform law to try to lower prescription drug prices.

The Trump administration would not defend the law in court so a coalition of 21 Democratic states led by California stepped in.

"This lawsuit is as dangerous as it is reckless. It threatens the healthcare of tens of millions of Americans across the country -- from California to Kentucky and all the way to Maine," said California Attorney General Xavier Becerra in a statement. "The Affordable Care Act is an integral part of our healthcare system. ... Because no American should fear losing healthcare, we will defend the ACA every step of the way."

After November's midterm elections, the Democratic-led House of Representatives also joined in. In briefs filed with the appellate court, House lawyers said that if O'Connor's ruling were upheld "the consequences will be devastating."

"Millions of Americans will be denied affordable health care," the House lawyers wrote. They added that "insurance costs will skyrocket" and "Medicare recipients will face steep increases in the price of drugs and other services."

House Speaker Nancy Pelosi said the administration's stance amounted to "all-out war on the health care of the American people."

"On the very first day that the Democratic Majority held the gavel, the House of Representatives voted to intervene against Republicans' monstrous health care lawsuit to defend people with pre-existing conditions and the health care of all Americans," Pelosi said in a statement. "While the Trump Administration broadens its monstrous ambitions from destroying protections for pre-existing conditions to tearing down every last benefit and protection the Affordable Care Act provides, Democrats are fiercely defending the law of the land and protecting all Americans' health care."

Sen. Kamala Harris, a California Democrat, became the first 2020 candidate to weigh in on the filing with her criticism Monday night. During Attorney General William Barr's confirmation hearing in January, Harris asked him whether he was open to reconsidering the department's position. He replied: "Yes."

"Trump and his administration are trying to take health care away from tens of millions of Americans — again," Harris wrote in a tweet. "We must fight back again with everything we've got. And in 2020, we need to elect a president who will make health care a right."