Trump administration plans to cut US troops in Germany 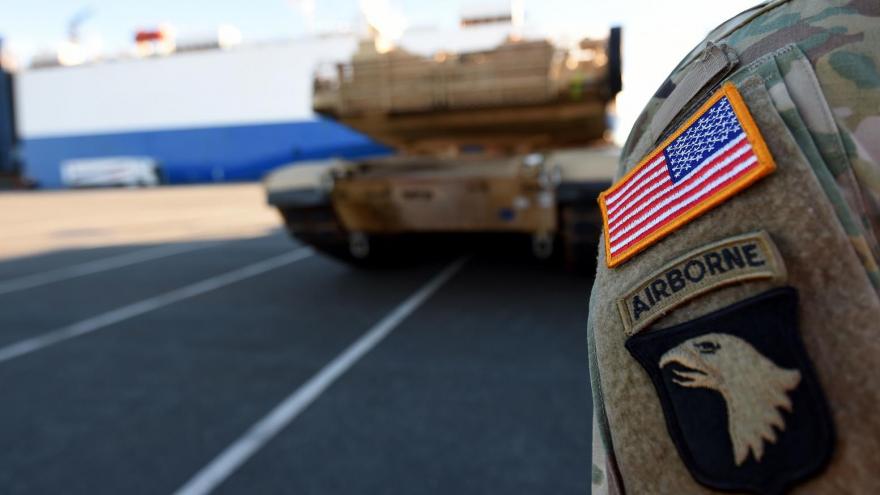 The White House has asked for a substantial reduction of US military personnel stationed in Germany, according to a US defense official.

(CNN) -- The White House has asked for a substantial reduction of US military personnel stationed in Germany, according to a US defense official.

The official said that the exact size of the reduction has not been decided but a cut of 9,500 is the current tentative planning figure. The formal order to begin moving troops has yet to be given but is expected soon.

There are approximately 34,000 US troops stationed in Germany.

A spokesman for the Pentagon referred CNN to the National Security Council, which has not responded to the request for comment.

President Donald Trump has long criticized Germany over a range of issues, particularly Berlin's failure to meet the target of 2% of GDP spending on defense that is recommended by NATO.

While defense officials had weighed moving some forces from Germany in the past, several US and NATO officials told CNN that the size and timing of the reduction were unexpected.

NATO referred questions about the reduction to the US government.

The US military has stationed forces in Germany since the end of the Second World War and their presence there on the front lines of the Cold War helped deter the Soviet Union from mounting an attack on NATO members.

While the number of US troops in Germany had decreased in recent years, US bases in the country continue to be used by the military due to their strategic location and the presence of US defense infrastructure such as air bases and medical facilities.

Withdrawal would be a blow to NATO

If the troops directed to leave Germany are removed from Europe entirely, the drawdown could be seen as a major blow to solidarity within the NATO alliance as many member countries continue to express concerns about the threat posed by Russia, which has used military force against Ukraine in recent years.

The top Democrat on the Senate Armed Services Committee slammed news of the planned drawdown, calling it "petty and preposterous" and a "favor" to Russian President Vladimir Putin.

"This order is petty and preposterous. It's another favor to Putin and another leadership failure by this administration that further strains relations with our allies," Sen. Jack Reed of Rhode Island told CNN in a statement.

Many European allies have openly questioned Trump's commitment to NATO which he labeled obsolete during his campaign for the presidency.

While Trump has since changed his tone, claiming credit for a member countries boosting their defense spending, he has continued to slam Germany.

While NATO officials have said that Trump's pressure has contributed to the growth in defense spending, they had also previously pointed to an increase in US military forces in Europe as indicative of Washington's continued commitment to the alliance, a narrative that a major reduction from Germany could undermine.

Germany recently agreed to pay a greater share of NATO's direct budget, allowing the US to reduce its contribution.

It is possible that any troops removed from Germany could be repositioned in Poland as Warsaw has long sought an increase in the number of US personnel stationed there, with Poland's President offering to name a new US Base in Poland Ft. Trump.

Senior Trump administration officials have in the past suggested moving US troops from Germany to Poland due to Berlin's failure to meet the 2% target.

"Poland meets its 2% of GDP spending obligation towards NATO. Germany does not. We would welcome American troops in Germany to come to Poland," the US ambassador to Poland, Georgette Mosbacher, wrote on Twitter in August.

While the Pentagon has increased the number of US troops in Poland in recent years, the majority of those personnel are designated rotational forces.

This story has been updated with comments from Sen. Jack Reed.