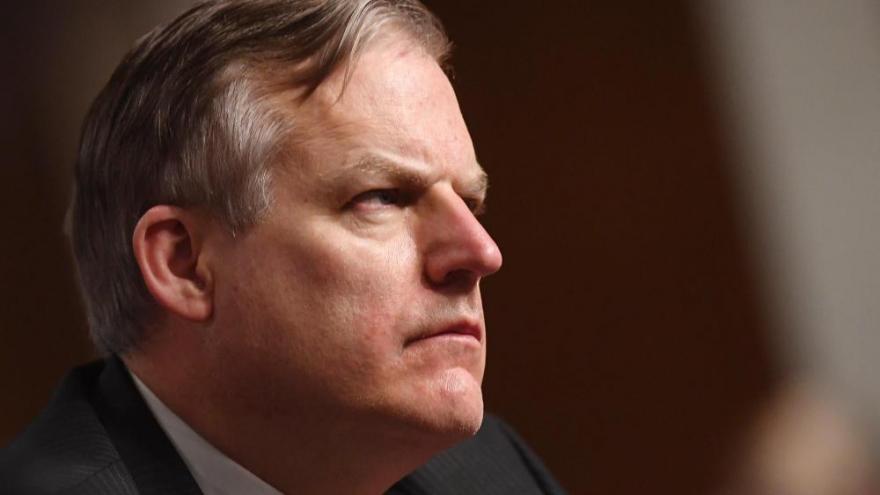 (CNN) -- The Trump administration has carried out sweeping changes atop the Defense Department's civilian leadership structure, removing several of its most senior officials and replacing them with perceived loyalists to the President.

The flurry of changes, announced by the Department of Defense in a statement roughly 24 hours after President Donald Trump fired Defense Secretary Mark Esper, have put officials inside the Pentagon on edge and fueled a growing sense of alarm among military and civilian officials, who are concerned about what could come next.

Four senior civilian officials have been fired or have resigned since Monday, including Esper, his chief of staff and the top officials overseeing policy and intelligence. They were replaced by perceived Trump loyalists, including a controversial figure who promoted fringe conspiracy theories and called former President Barack Obama a terrorist.

A senior defense official told CNN late Tuesday that "it appears we are done with the beheadings for now," referring to the wave of ousted civilian leaders, including Esper.

But the moves will likely only add to the sense of chaos within the Pentagon following Trump's firing of Esper. The President jettisoned him two days after his Democratic opponent, Joe Biden, was projected as the winner of the presidential election, a conclusion that Trump has refused to accept. Concerns are growing that a chaotic transition period could undermine national security.

While top officials have been dealing with Trump's unpredictable decision making since he took office, the current level of uncertainty has risen steadily since the election.

Knowledgeable sources told CNN's Jake Tapper Tuesday that the White House now seems focused on going after Esper's under secretaries at the Defense Department in the wake of his firing on Monday. Esper was replaced by Christopher Miller, the director of the National Counterterrorism Center.

The sources said the effort may be because Esper and his team were pushing back on a premature withdrawal from Afghanistan that would be carried out before the required conditions on the ground were met, and other pending security issues.

"This is scary, it's very unsettling," one defense official told CNN. "These are dictator moves."

Among those who assumed new roles at the Department of Defense was controversial retired Brig. Gen. Anthony Tata, who moved into the Pentagon's top policy role, taking over the duties of James Anderson, who resigned Tuesday, according to another US defense official.

Tata had been nominated to be under secretary of defense for policy this summer but his nomination was withdrawn because of bipartisan opposition.

CNN's KFile reported that he has made numerous Islamophobic and offensive comments and promoted various conspiracy theories. In several 2018 tweets, he claimed Obama was a "terrorist leader" who did more to harm the US "and help Islamic countries than any president in history."

After the withdrawal of his nomination, Tata was designated "the official performing the duties of the deputy under secretary of defense for policy," reporting to Anderson.

Tata is widely viewed as a Trump loyalist who maintained support from the White House even as Republicans on the Senate Armed Services Committee signaled they were unwilling to support his confirmation earlier this year.

Anderson had been serving as the acting under secretary of defense for policy since John Rood was fired by the Trump administration in February due to disagreements on a range of policy issues.

It was not immediately clear whether Anderson had been asked to resign.

In his farewell message to members of his staff, Anderson said, "I leave knowing that the team will persevere, regardless of what lies ahead. I encourage everyone to remain mission focused, apolitical, and never to forget your oath of office."

Democrats were alarmed by the developments.

"It is hard to overstate just how dangerous high-level turnover at the Department of Defense is during a period of presidential transition. The top policy professional in the Department resigning the day after the Secretary of Defense was fired could mark the beginning of a process of gutting the DoD -- something that should alarm all Americans," House Armed Services Chairman Adam Smith, a Democrat from Washington state, said in a statement Tuesday.

Anderson wasn't the only senior figure to depart on Tuesday.

Retired Navy Vice Adm. Joseph Kernan, the under secretary of defense for intelligence, also left his position, according to another defense official. It was not immediately clear if Kernan had resigned or was fired, but his departure has been accelerated.

Kash Patel will be the chief of staff to Miller, according to an administration official and a US defense official. Patel, who most recently served as senior director for counterterrorism at the National Security Council, is a controversial figure who previously worked under Republican Rep. Devin Nunes of California on the House Intelligence Committee.

He was among the names mentioned during the House impeachment inquiry's investigation into the administration's decision to delay military aid to Ukraine last year.

Patel has a "very close" working relationship with Miller, the administration official said.

Ezra Cohen-Watnick was also named to a new post and will be the acting under secretary of defense for intelligence and security, according to the Pentagon, replacing Kernan.

Cohen-Watnick gained notoriety in March 2017 for his alleged involvement in providing intelligence materials to then-House Intelligence Chairman Nunes, who went on to claim that US intelligence officials improperly surveilled Trump associates.

Multiple civilian and military officials working inside the Pentagon are raising the question of whether the departure of Esper and other officials will now clear the way for Trump in his final weeks in office to potentially again call for initiatives he wants to pursue that the Pentagon opposes.

One would be again raising the specter of using active duty forces under the Insurrection Act against any future protests. Another potential raised by officials is he would override the military advice he has been given and bring troops home from Afghanistan by Christmas.

US military officials have long stressed that the US withdrawal from Afghanistan is conditions based, with those conditions including the Taliban's breaking its ties to al Qaeda and making progress in peace talks with the Afghan government, two conditions that have yet to be met.

But despite the lack of progress, the Trump administration has already substantially reduced US troops in Afghanistan to about 4,500, the lowest levels since the earliest days of the post 9/11 campaign.

Miller, who Trump tapped to lead the Pentagon for what will likely be the remainder of his administration, has been a driving force behind some of Trump's policies targeting Iran and its proxy group Hezbollah, as well as counterterrorism efforts linked to the wars in Syria and Iraq.

Prior to heading the NCTC, Miller was director of counterterrorism at the National Security Council.

An Iowa native and retired US Army officer, Miller has also served as a deputy assistant secretary of defense. Miller was seen arriving at the Pentagon Monday afternoon and, soon after, met with Milley and other top staff for critical briefings on issues such as the nuclear codes and military operations around the world. Miller told officials to not expect "significant changes at this time," the official said.

But after less than 24 hours with Miller on the job, the top Defense Department official heading policy resigned.

"It's crazy," one official said.

Officials point out that by removing Esper and other top officials, the Biden transition team will lose the benefit of their expertise.

Some officials have also questioned whether Miller has the experience to step in for Esper, even if in an acting capacity.

"Miller is in over his head," in part because he was a relatively low-level official with an expertise focused on counterterrorism, one official told CNN.

The official said that while Miller was a nice guy, he described Miller as a "tool" and "vassal of the NSC" put in to get the job done.

The official added that no one at the Pentagon has an understanding as to what the grand plan is.

Esper's firing also raised concerns that other top national security officials who have earned Trump's wrath may be vulnerable.

CNN reported Monday that Trump and some of his conservative allies have become increasingly frustrated with CIA Director Gina Haspel in recent weeks, accusing her of delaying the release of documents they believe would expose so-called "deep state" plots against Trump's campaign and transition during the Obama administration, according to multiple current and former officials.

FBI Director Christopher Wray has also provoked Trump's ire, fueling some uncertainty about his future, according to the same sources.

This story has been updated with additional developments, background information and context.