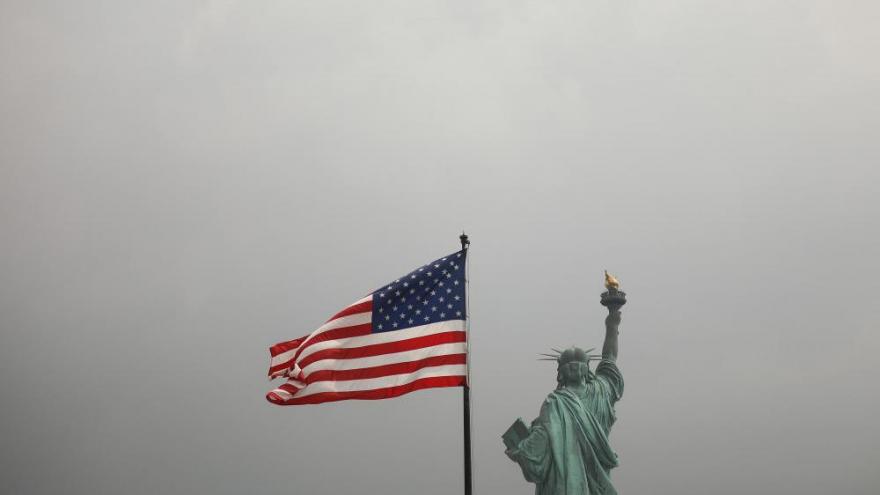 An America flag flies near the Statue of Liberty on Liberty Island on August 14, 2019 in New York City.

(CNN) -- The Trump administration has informed Congress it intends to accept only 15,000 refugees this fiscal year, a new historic low for the US.

Since coming into office in 2017, the Trump administration has increasingly slashed the annual refugee cap, which determines how many may enter the US, to deeper lows. President Donald Trump has repeatedly demonized refugees, particularly those from Muslim-majority countries -- most recently at a campaign rally Wednesday evening.

The proposed 2021 cap was denounced by humanitarian organizations and Democratic lawmakers.

In a media note sent less than an hour before the end of fiscal year 2020 on Wednesday, the State Department said it had informed Congress of the proposed cap and said the US "anticipates receiving more than 300,000 new refugees and asylum claims in Fiscal Year 2021." However, the vast majority of those would be asylum cases.

"Of that number, up to 15,000 would be refugees admitted through the U.S. Refugee Admissions Program and more than 290,000 would be individuals in new asylum cases," the State Department note said.

The proposal for fiscal year 2021 allows 3,000 fewer refugees than in the last fiscal year. The US had been already on course during the 2020 fiscal year to admit the lowest level of refugees since 1980 when the coronavirus pandemic hit and led to a pause in arrivals until late July. Only a little more than 9,000 refugees had been admitted to the US as of August 31, according to the Refugee Processing Center.

The State Department claimed that the "President's proposal for refugee resettlement in Fiscal Year 2021 reflects the Administration's continuing commitment to prioritize the safety and well-being of Americans, especially in light of the ongoing COVID-19 pandemic."

"It accounts for the massive backlog in asylum cases -- now more than 1.1 million individuals -- by prioritizing those who are already in the country seeking humanitarian protection," the agency said in the note released late Tuesday night. "It also accounts for the arrival of refugees whose resettlement in the United States was delayed due to the COVID-19 pandemic."

"With this cruel decision, America has abandoned its leadership role in providing safety to refugees who are most in need of resettlement," they said in a statement Thursday. "The Administration's actions are a shameful betrayal of our longstanding bipartisan tradition of generosity and strength and accomplish nothing except failing to protect innocent victims of persecution who pose no threat to our security and have turned to America for safety."

"President Trump has harsher words for innocent refugees than for the dictators they are escaping," they said.

Eric Schwartz, president of Refugees International and former Assistant Secretary of State for Population, Refugees, and Migration, called the proposed cap "disappointing but not surprising."

"It is part of an overall strategy of fear-mongering and vilification of refugees," he said in a statement.

At a campaign rally on Wednesday night in Duluth, Minnesota, Trump sought to foment fear about refugee resettlement.

"Another massive issue for Minnesota is the election of Joe Biden's plan to inundate your state with a historic flood of refugees," Trump said, claiming that Biden and Vermont Sen. Bernie Sanders pledged a 700% increase in refugees to the state of Minnesota.

"700% increase refugees coming from the most dangerous places in the world including Yemen, Syria and your favorite country Somalia. You love Somalia," Trump said. "Biden would turn Minnesota into a refugee camp."

In the first few months of his administration, Trump asked then-acting Homeland Security Secretary Elaine Duke why he could not ban refugees from "f*****g Somalia" in a bout of rage at his Bedminster golf club, according to the book "Border Wars."

The State Department said proposed refugee resettlement program contains "specific allocations for people who have suffered or fear persecution on the basis of religion; for Iraqis whose assistance to the United States has put them in danger; for refugees from El Salvador, Guatemala, and Honduras; and for refugees from Hong Kong, Cuba, and Venezuela." The State Department has consistently assailed those in power in the latter three countries.

However, World Relief President Scott Arbeiter said in a statement that although the "White House has made explicit promises to protect persecuted Christians abroad," they "have not seen these promises honored through a robust US refugee resettlement program that has been a lifeline of protection for persecuted Christians."

"Instead, we've seen the resettlement of refugees from countries known for persecution drop about 90% in some cases over the last four years. This is unconscionable. We urge the President to increase and sign the PD as soon as possible," Arbeiter said.

Each year, the administration sets a cap for how many refugees may be admitted to the US. Historically, the number of admissions has fluctuated according to world events, though they've generally been high. From fiscal years 1990 to 1995, for example, many refugees arriving to the US were from the former Soviet Union, according to the Pew Research Center.

In the last few years of the Obama presidency, the administration moved toward increasingly high caps, up to 110,000 in fiscal year 2017 amid the Syrian crisis.

CORRECTION: This story has been updated to correct that the State Department informed Congress on Wednesday.