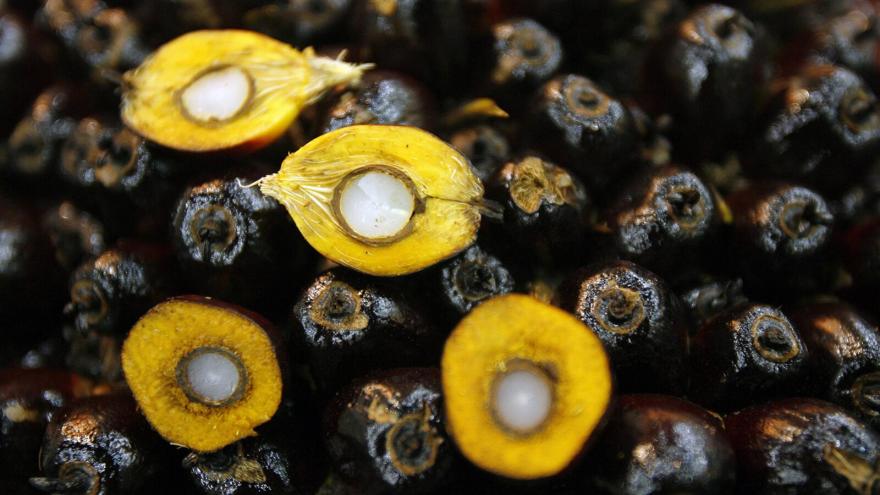 Halved oil palm kernels are seen on the trade floor of a commodities conference and exhibition in Kuala Lumpur, 03 July 2007.

(CNN) -- The Trump administration will halt imports of palm oil from Malaysia over findings of forced labor abuses at the plantations of one of the country's top producers of the product, which is found in many everyday items.

It is the latest in a string of Customs and Border Protection restrictions aimed at stopping goods made with forced labor from entering the US market.

Palm oil is the most used vegetable oil on the planet and can be found in everything from cleaning products to foodstuffs and cosmetics, such as lipstick and packaged bread.

"Palm oil is an ingredient in a lot of products that American consumers buy and use. And I think it's important for manufacturers and importers to be aware of where they're at higher risk of forced labor, and to demand that their suppliers are adhering to protecting human rights of their workers," said Ana Hinojosa, executive director of CBP's Trade Remedy Law Enforcement Directorate.

After a months-long investigation into alleged labor abuses, CBP determined that the company's palm oil production in Malaysia met the criteria to detain imports to the US.

Sime Darby Plantation Berhad is the world's largest oil palm plantation company by planted area and produces about 20% of global production by capacity, according to the company.

This is the second order focused on Malaysian palm oil in recent months. Earlier this year, CBP blocked imports of palm oil from FGV Holdings Berhad, a Malaysian-based agricultural company after a yearlong investigation.

"In many cases, we also found instances of physical violence, sexual violence, intimidation," she said.

Hinojosa said the "vast majority" of palm oil comes from Malaysia and Indonesia. She said palm oil plantations in Malaysia are very remote areas -- away from transportation and communication.

In many cases, she said, there are armed guards at these plantations that restrict the movement of workers, and there is a "strong connection" between forced labor and countries or industries that rely heavily on migrant workers.

Sime Darby Plantation Berhad employs approximately 24,800 migrant workers, who represent 63% of their workers on the ground in Malaysia, according to CBP.

At the end of November, CBP announced it would detain shipments containing cotton and cotton products originating from a major cotton producer in China's western Xinjiang region because of forced labor concerns.

The US has had a prohibition on the import of goods produced using forced labor since the early 1930s, but enforcement was extremely sparse. A 2016 change in the law that ended exceptions, along with increased awareness and a push by then-CBP Commissioner Gil Kerlikowske spurred the agency to use its authorities more aggressively, agency officials previously told CNN.

During the Trump administration, the agency has ramped up its efforts in this area.

"One thing that we sometimes get asked is, 'Is this going to go away with the change of administration?', and I would have to say that this is an issue that is cross cutting and is very bipartisan," said Hinojosa.

Although CBP has not yet had a deep-dive with the Biden transition team on the forced-labor issues, Hinojosa predicted this would remain a priority for the agency.

"You'll be seeing a lot more of this in the coming months and years," she said.

Update: After the story was published, Customs and Border Protection said it provided an inaccurate figure of Sime Darby Plantation Berhad's production capacity figure for Malaysia. This story has been updated with figures from the company.