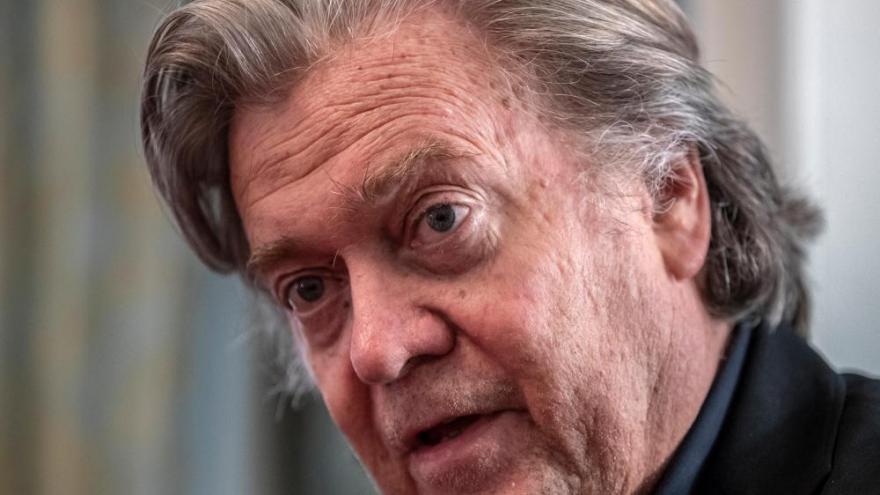 Steve Bannon, a former adviser to former President Donald Trump, turned himself in to the FBI Monday morning to self-surrender after being indicted on criminal contempt charges on Friday. Bannon is shown here during an interview with The Associated Press, in Washington D.C.

(CNN) -- Steve Bannon won't be detained before trial on charges of contempt of Congress after he failed to comply with subpoenas from the House committee investigating January 6.

Bannon, a former adviser to former President Donald Trump, appeared in federal court for the first time Monday. He will be arraigned on Thursday.

Prosecutors did not seek to detain Bannon before trial. Under conditions approved by the judge, Bannon agreed to weekly check-ins, to surrender his passport, provide notice of any travel outside the district and seek court approval for travel outside the continental United States.

"I'm telling you right now, this is going to be the misdemeanor from hell for Merrick Garland, Nancy Pelosi and Joe Biden," Bannon told reporters after the hearing, swearing his team is "going to go on the offense."

Before his court appearance, Bannon turned himself in Monday morning at an FBI field office in Washington. He was met by a swarm of media and was defiant when addressing TV cameras outside the building, saying, "We're taking down the Biden regime."

Moments before turning himself in Monday, Bannon went live on social media and told his supporters to "stay focused."

"I don't want anybody to take their eye off the ball from what we do every day, OK," Bannon said to a camera for his online show "WarRoom."

"I want you guys to stay focused on message," he added before walking into the FBI office. "Thank you very much."

David Schoen, a civil rights attorney who defended Trump at his second impeachment trial, appeared at Bannon's side in the courtroom and before the cameras outside after Monday's hearing.

Schoen said Bannon did not comply with the House select committee's subpoena because he was following the advice of his lawyer at the time.

"He was instructed by his attorney not to show up," Schoen told reporters.

In October, the House January 6 committee subpoenaed documents and testimony from Bannon but his attorney, Robert Costello, said he would not be cooperating with the investigation because he had been directed not to by Trump.

The White House counsel's office has told Costello it won't support Bannon's refusals to testify. Biden's White House has declined to assert executive privilege regarding documents and witnesses related to the January 6 riot at the Capitol.