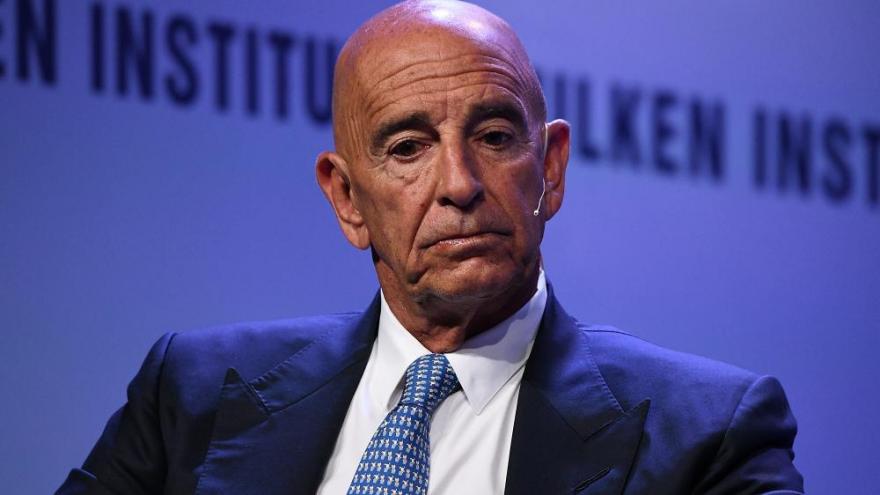 A federal magistrate judge on July 23 ordered Tom Barrack, a longtime associate of former President Donald Trump who was indicted earlier this week on charges of illegal foreign lobbying, released from jail pending trial, freeing him on a bail package that includes a $250 million bond secured by $5 million in cash.

(CNN) --A federal magistrate judge on Friday ordered Tom Barrack, a longtime associate of former President Donald Trump who was indicted earlier this week on charges of illegal foreign lobbying, released from jail pending trial, freeing him on a bail package that includes a $250 million bond secured by $5 million in cash.

The judge also ordered Barrack to wear a GPS location monitoring bracelet, barred him from transferring any funds overseas and restricted his travel to parts of Southern California and New York. He will have a curfew to be determined by pretrial services.

He must appear in federal court in Brooklyn on Monday, where he will be arraigned. A spokesman has said he intends to plead not guilty.

Barrack and co-defendant Matthew Grimes were released from custody later Friday, a source familiar with the matter told CNN.

The judge on Friday had also ordered Grimes released on a $5 million bond. Grimes will be subject to GPS location monitoring with an electronic bracelet and travel restriction.

Barrack was arrested Tuesday in Los Angeles, where he had an initial appearance in front of US Magistrate Judge Patricia Donahue. He had been in custody since then.

In a court filing, the Justice Department had asked that he be held in custody while he is moved to New York for his arraignment, calling him a serious risk of flight due to his "vast wealth," foreign connections and access to private aircraft.

They noted that his co-defendant in the case, Rashid Sultan Rashid Al Malik Alshahhi, fled the United States three days after he was interviewed by the FBI in 2018. Alshahhi hasn't returned to the United States, and he remains at large.

The court filings also alleged that Barrack had connections to senior leaders in both the UAE and Saudi Arabia -- both countries without extradition treaties with the United States. That created the potential, prosecutors said, that Barrack could have "the assistance" of those countries' "highest leaders" if he were able to flee to those countries via his private aircraft.

In discussions in the days following Barrack's detention, his legal team focused on trying to keep their 74-year-old billionaire client off of "Con Air," the famed US Marshals Service plane for transporting certain defendants who are in government custody, according to people familiar with the matter.

The grand jury indictment, unsealed Tuesday, alleges that Barrack sought to influence policy positions of the US government and that he was working as a back-channel to the United Arab Emirates. He did not register as an agent of a foreign government, the indictment alleged, in violation of a law requiring that he do so. He was also accused of making several false statements about his UAE-related activities when he was interviewed by the FBI in June 2019.