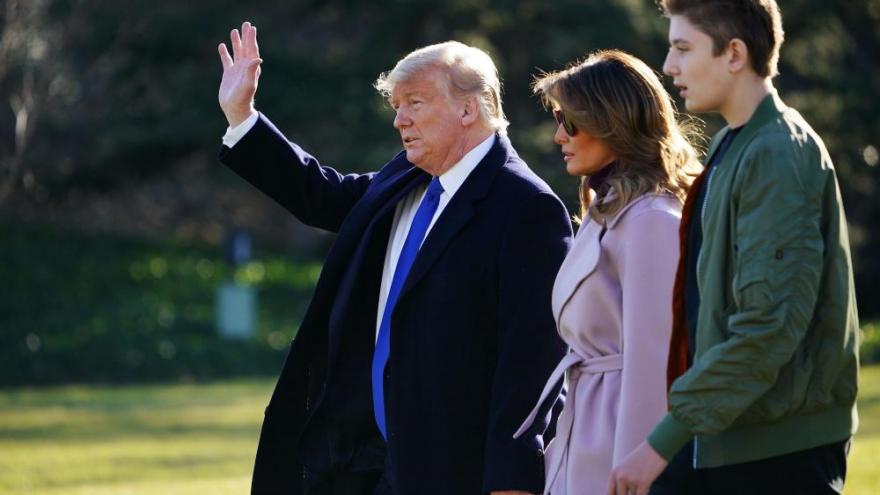 US President Donald Trump, First Lady Melania Trump and son Barron Trump make their way to board Marine One from the South Lawn of the White House in Washington, DC on January 17, 2020.

The records from the Palm Beach County Supervisor of Elections website show the ballots were mailed Wednesday to Trump's Mar-a-Lago Club, which he made his permanent residence last year.

Despite Trump's rhetoric about voting by mail, the President has recently claimed that Florida's voting system is secure, tweeting earlier this month: "Whether you call it Vote by Mail or Absentee Voting, in Florida the election system is Safe and Secure, Tried and True. Florida's Voting system has been cleaned up (we defeated Democrats attempts at change), so in Florida I encourage all to request a Ballot & Vote by Mail!"

Election experts have told CNN there is no real difference between absentee voting and no-excuse mail voting and the two are "essentially the same thing."

USA Today was first to report the ballot request.

Mail-in voting has been front-and-center in recent weeks as fears of the coronavirus have caused states to make the process easier so residents can avoid going to polling centers where infection can potentially spread. Trump and other Republicans have railed against the option, baselessly asserting that it will lead to voter fraud, with the President saying Thursday that he opposes much-needed funding for the United States Postal Service because he doesn't want to see it used for mail-in voting this November.

There is not widespread voter fraud in US elections, and nonpartisan experts say neither party automatically benefits when states expand access to mail-in voting.

But even as Trump publicly opposes mail-in voting, his support of it in Florida and his own decision to use it for the 2020 election could provide Democrats and some Republicans who support the option with yet another argument as to why his opposition to it is purely political.

When the President was asked earlier this month about his support for mail-in voting in Florida, he seemed to imply that Republican-run states with existing mail-in voting programs were up to par, but Democratic states establishing or expanding mail-in voting during the pandemic were not.

This story has been updated with a statement from the White House.