Trump and Macron to meet amid NATO tensions 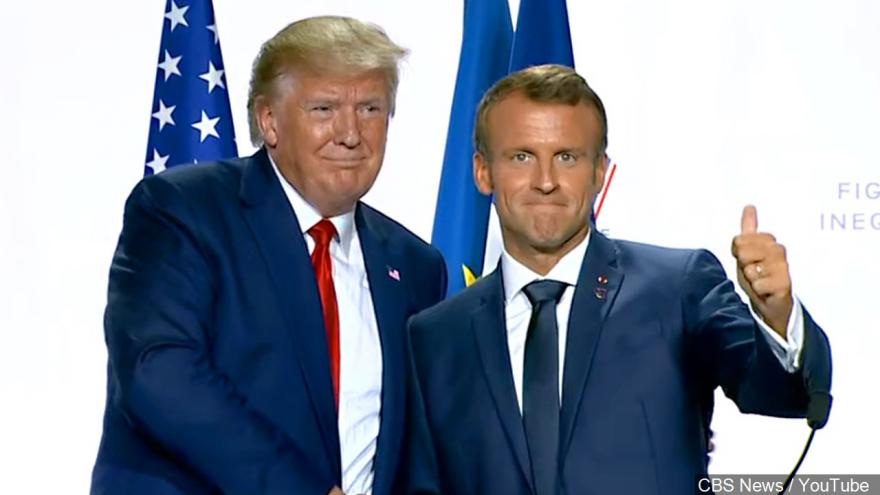 (CNN) -- President Donald Trump is slated for what could be a tense meeting with Emmanuel Macron in London on Tuesday following the French President's warning last month that American indifference to the alliance is leading to the "brain death of NATO."

World leaders have gathered in the British capital for a summit to mark NATO's 70th anniversary, and Trump is also scheduled to have breakfast with NATO Secretary General Jens Stoltenberg at the US ambassador's residence and have tea with Prince Charles, followed by an evening reception at Buckingham Palace hosted by the Queen. He'll then head to 10 Downing Street for a leader's reception hosted by British Prime Minister Boris Johnson.

In an interview with the Economist, Macron cited the US' sudden pull back of American troops in northern Syria and Turkey's incursion into the region without informing other NATO allies.

"You have an uncoordinated aggressive action by another NATO ally, Turkey, in an area where our interests are at stake," Macron said. "There has been no NATO planning, nor any coordination. There hasn't even been any NATO deconfliction ... strategically and politically, we need to recognize that we have a problem."

Trump said Turkey was "disappointed in the statement made by France, having to do with commitment and NATO."

"That was a big statement that was made a couple of days ago by France. So I think that bothered the President very much. And I don't think he was very happy about it. And a lot of other people feel that way, too," Trump added.

Erdogan may prove to be a disruptive figure this week with a US defense official telling CNN that Turkey has threatened to block initiatives to defend the easternmost members of the alliance such as Poland and the Baltic States.

Ahead of his departure on Monday, Trump appeared to herald an agreement reached last week for the US to substantially cut its contribution to NATO's collective budget.

"We're going to London and it will be NATO and we're meeting with a lot of countries. They're going to do a little more burden sharing," Trump said.

But NATO leaders will be bracing themselves for Trump returning to his common complaint that member states are not reaching the alliance's 2% of GDP defense spending target. Only nine of the 29 members currently meet that level.

The President also appeared to be preoccupied by the ongoing impeachment inquiry ahead of his departure, criticizing Democrats for holding impeachment hearings during his trip.

"And for them to be doing this, saying this and putting an impeachment on the table, which is a hoax...," Trump said, before pivoting to argue that the impeachment proceedings had united Republicans.

Trump has spent past summits disrupting diplomatic norms, pressuring allies to contribute more to defense and calling out world leaders regarded as major US allies.

In 2017, Trump declined to affirm NATO's Article 5 commitment, which, if invoked, stipulates that allies come to the aid of another ally under attack, during his first NATO summit as President of the United States. In 2018, Trump's second summit as President ended with NATO leaders disputing his claims that he'd secured new financial commitments from the alliance's full membership.