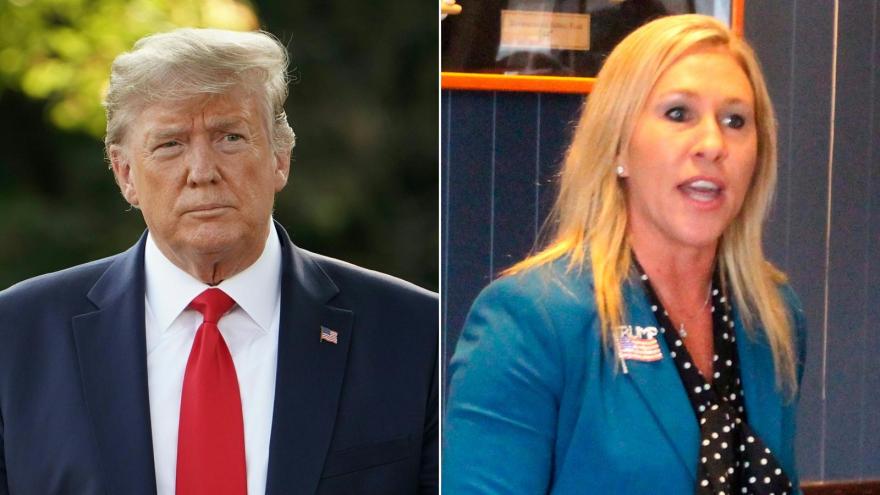 (CNN) -- Top Republicans, including President Donald Trump and House Minority Leader Kevin McCarthy, are embracing their party's nominee for a House seat in Georgia, despite her promotion of the baseless QAnon conspiracy theory.

Trump gave a full-throated endorsement of Marjorie Taylor Greene on Wednesday after she won a primary runoff in Georgia, calling her a "future Republican Star" and "a real WINNER!" in a tweet.

Greene has drawn backlash from some GOP lawmakers -- and has even previously been rebuked by McCarthy and other House Republican leaders -- and put the party in a difficult position during an election year where control of the White House and Congress are at stake. But top Republicans are now backing her after she defeated John Cowan in a runoff.

Top House Republican leaders were silent on Greene's victory Tuesday night and didn't weigh in for hours on Wednesday morning, but then offered an endorsement in response to questions from CNN.

A McCarthy spokesperson, who declined to be named, said in a statement Wednesday afternoon that House Republicans "look forward" to Greene's victory in November.

"We look forward to Georgians Andrew Clyde and Marjorie Taylor Greene - and all of our Republican candidates across the country - winning in November so that we can enact policies to renew the American dream, restore our way of life, and rebuild the greatest economy in the world," the statement said, adding, "It's clear that the Democrat Party does not share those goals," and specifically criticizing former Vice President Joe Biden, Democratic Rep. Ilhan Omar and House Speaker Nancy Pelosi.

Minority Whip Steve Scalise and GOP conference chair Liz Cheney have not yet commented publicly on Greene's win or said if they plan to support her candidacy after her primary runoff victory.

In one indication that the win has divided Republicans, GOP Rep. Adam Kinzinger of Illinois tweeted a rebuke of the QAnon conspiracy theory on Wednesday, saying there is "no place in Congress for these conspiracies."

"Qanon is a fabrication. This 'insider' has predicted so much incorrectly (but people don't remember PAST predictions) so now has switched to vague generalities. Could be Russian propaganda or a basement dweller. Regardless, no place in Congress for these conspiracies," he tweeted.

Trump campaign official Matt Wolking went after Kinzinger over his criticism of QAnon on Twitter, saying, "When will @RepKinzinger condemn the Steele Dossier fabrications and conspiracy theories pushed by Democrats? That actually WAS Russian propaganda."

During a Trump campaign call on Wednesday, GOP Rep. Elise Stefanik dodged a question about Greene when asked if Republicans need to distance themselves from far-right elements of their party as they call on Democrats to denounce the far left.

Stefanik took exception to the question and instead criticized Biden's running mate, Sen. Kamala Harris, describing her record as "far left and radical."

Greene's primary runoff win against Cowan took place in a solidly Republican district, which puts her in a strong position to win a congressional seat in the fall. That puts national Republicans in the difficult spot of how to respond and how much to support her.

Asked on Wednesday if he had concerns about Greene's nomination, Missouri Sen. Roy Blunt, a top GOP Senate leader, said: "I barely understand Missouri politics, I sure don't understand Georgia politics." Asked about QAnon conspiracy theorists emerging in some GOP primaries, Blunt added: "I haven't come across it."

Democrats are seizing on the controversy.

Pelosi, asked Wednesday for her reaction to the GOP nominating Greene despite her embrace of the QAnon conspiracy theory, told CNN: "They seem to be comfortable with it."

Greene has repeated and promoted QAnon theories and phrases, praising the mythical Q as a "patriot" in a video from 2017 and describing the conspiracy theory as "something worth listening to and paying attention to."

She has also faced a backlash over the revelation of past Islamophobic and anti-Semitic comments, including saying that there is "an Islamic invasion into our government offices," and calling the progressive billionaire activist George Soros, who is Jewish, a "Nazi."

Republican leaders responded with condemnation following a report in Politico surfacing racist remarks and other incendiary comments this summer.

A spokesman for McCarthy told Politico at the time, "These comments are appalling, and Leader McCarthy has no tolerance for them."

Scalise called the comments from Greene "disgusting" and responded by endorsing Cowan. Scalise maxed out in donations to Cowan and helped fundraise for his campaign.

Party committees typically endorse their nominees without hesitation. But the National Republican Congressional Committee refused to say when asked if it endorsed Greene's candidacy after she won the GOP nomination, instead attacking a Democratic congresswoman from Minnesota.

NRCC spokesman Chris Pack said in a statement on the race sent to CNN Wednesday in response to a request for comment about Greene's win: "Have you asked every Democrat if they will support racist anti-Semite Ilhan Omar since she's won her primary last night?"

Omar, a member of the progressive Democratic "Squad," prevailed in her fight to keep her seat in a Minnesota primary election on Tuesday.

Her rhetoric related to Israel has made her a target of criticism from Republicans as well as, at times, from some members of her own party. Pelosi and other members of House Democratic leadership once went so far as to publicly call on Omar to apologize for comments they said included "anti-Semitic tropes."

"The DCCC backs all of our House Democratic incumbents, that of course includes Rep. Omar," said DCCC spokesman Cole Leiter.