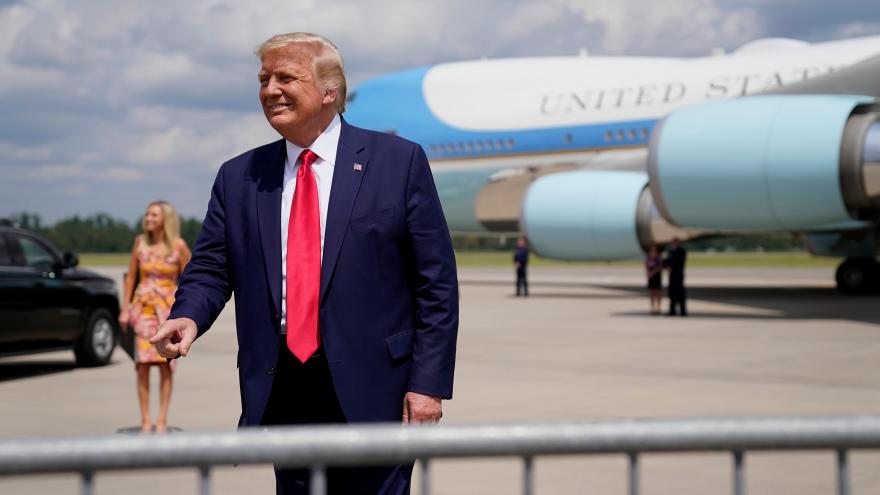 (CNN) -- President Donald Trump on Wednesday appeared to encourage people in North Carolina to vote twice -- once by mail and once in person -- during the November general election to purportedly double check that their initial vote was counted, which is already receiving push back from state election officials.

Americans can only vote once per election.

When Trump was asked by local news station WECT in Wilmington, North Carolina, whether he was confident in the state's absentee voting system, the President launched into a somewhat rambling answer.

The President later told people to send in their ballots, saying, "Send them in strong, whether it's solicited or unsolicited. The absentees are fine. You have to work to get them, you know."

"And you send them in, but you go to vote. And if they haven't counted it, you can vote. So that's the way I feel," he said.

Richard Pildes, a CNN election law analyst and professor at the New York University School of Law, said there are both legal and public policy implications to what Trump said.

"But from a public policy perspective, these comments are only going to stir enormous confusion," he added.

Rick Hasen, a professor of law and political science at University of California-Irvine and a CNN analyst, said that while a case could be made that Trump was joking, the bigger question is about the intent of his remarks.

"It sounds like he was suggesting an attempt at double voting as a means of testing the integrity of the system, or assuring that his voters can cast at least one ballot for him. Is that a fraudulent intent? I could see how a jury could find it to be so, especially given Trump's other statements suggesting he believes that such double voting would not be caught by election officials," Hasen wrote on his "Election Law Blog."

North Carolina officials are dissuading the public from taking the President's advice.

Patrick Gannon, a public information officer with the North Carolina State Board of Elections, told CNN that "people do not need to go to the polls on Election Day if their ballot had been counted."

"In fact, we'd strongly advise against that, to allow other people who haven't yet cast a ballot to vote," he said.

Gannon laid out three ways that voters can check the status of their absentee ballots. They can use a new tool the state is expecting to launch Friday called BallotTrax; they can check the voter search tool on the board's website which will show when a voter's ballot has been accepted; or they can contact their county board of elections.

"We believe that voters can trust the system," Gannon said. "Elections officials in North Carolina and elsewhere are working very hard to ensure that all voters can cast ballots and be assured that their votes will count."

Other states also cautioned against the President's suggestion.

"It's like advising someone to try to rob a bank to see if the security is as good as the bank says it is," Minnesota Secretary of State Steve Simon said. "Knowingly voting twice is a felony. Period. Doing it creates a mess for the voter and the election administrators alike."

During an interview with CNN's Wolf Blitzer on "The Situation Room" Wednesday evening, Attorney General William Barr said he didn't know "exactly" what the President was saying when he spoke about voting in North Carolina earlier in the day. "But it seems to me what he's saying is he's trying to make the point that the ability to monitor this system is not good and if it was so good, if you tried to vote a second time, you would be caught if you voted in-person."

When pressed about the fact that it's illegal to vote twice, Barr responded that he didn't know "what the law in the particular state says."

"There are some -- maybe you can change your vote up to a particular time, I don't know what the law is," Barr said.

The President has spent the last several months sowing fear over potential mail-in voting systems being susceptible to fraud.And while Trump may be encouraging voters to test their elections systems, his White House has also highlighted a voter fraud report from the conservative Heritage Foundation that listed cases where voters cast their ballots twice.

Trump has also held varying standards for mail-in voting in different states, claiming that liberal states like California allow "ballot harvesting" (for which there is no evidence) while Arizona and Florida have mail-in voting infrastructure that is secure. Voter fraud from mail-in balloting is rare, and there's no evidence it's a widespread problem in the US election system.

During a tele-rally on August 31, Trump encouraged Nevadans to vote by mail and in person.

"Get it and mail it back. It's a much more fair way of doing it as you know. And then you can go to vote on Election Day, and if the system is correct like they say, and it should be correct, they say it's correct, you go to vote and if your ballots are in, if they count it, they will have counted your vote and you won't be able to vote, which is good," Trump said.

Encouraging voters to double up on their votes could be particularly problematic in North Carolina, which has a complicated history with election fraud. Recently, a political operative hired by a Republican congressional candidate was indicted for directing an illegal scheme involving absentee ballots. And an increased number of duplicate ballots in the middle of an election already seeing more mail-in ballots because of the pandemic could further slow tabulations in the swing state on Election Day.

Trump has also argued that security measures for mail-in ballots are less secure than those for absentee ballots. But there's no distinction between the two. There are strict measures in place across the country to verify the authenticity of all ballots cast in the mail. These measures are very successful -- more than 99.9% of votes in US elections are legitimate.