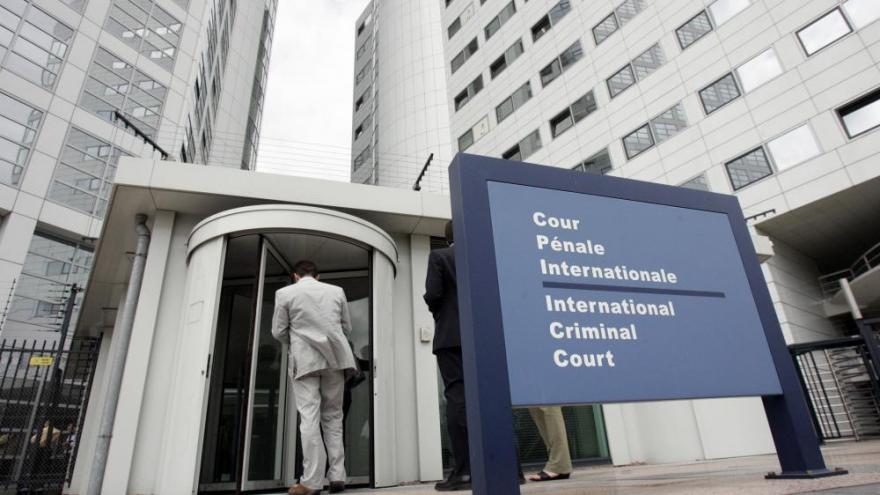 President Donald Trump authorized sanctions and additional visa restrictions against International Criminal Court personnel -- the latest attempt by the administration to strong arm the international body out of an investigation into a potential war crimes by US military and intelligence officials.

(CNN) -- President Donald Trump on Thursday authorized sanctions and additional visa restrictions against International Criminal Court personnel -- the latest attempt by the administration to strong-arm the international body out of an investigation into potential war crimes by US military and intelligence officials.

The international tribunal called the action "the latest in a series of unprecedented attacks on the ICC" that "constitute an escalation and an unacceptable attempt to interfere with the rule of law and the Court's judicial proceedings."

Under the new executive order, any individuals who "have directly engaged in any effort by the ICC to investigate, arrest, detain, or prosecute any United States personnel without the consent of the United States" or have attempted the same against a US ally without that country's consent may be subject to sanctions.

The latest move comes months after the ICC authorized a probe into alleged war crimes committed in Afghanistan by US and Afghan forces as well as alleged war crimes and crimes against humanity committed by the Taliban. It also follows a push by the court's Chief Prosecutor Fatou Bensouda to investigate potential crimes committed by Israel against the Palestinians -- a prospect about which Secretary of State Mike Pompeo said they were "gravely concerned."

Trump administration officials have long rejected the authority of the ICC -- noting that the US is not a party to the international tribunal -- and had already taken steps meant to deter the investigation, including revoking Bensouda's entry visa last year.

"The International Criminal Court's actions are an attack on the rights of the American people and threaten to infringe upon our national sovereignty," White House press secretary Kayleigh McEnany said in a statement.

"As the President's Executive Order makes clear, the United States will continue to use any means necessary to protect our citizens and our allies from unjust prosecution by the International Criminal Court," she said.

Speaking at the State Department on Thursday, Pompeo said, "We cannot and we will not stand by as our people are threatened by a kangaroo court."

Pompeo said the economic sanctions would be determined on a case-by-case basis. He also said the visa restrictions would include family members of the targeted officials.

"It gives us no joy to punish them, but we cannot allow ICC officials and their families to come to the United States to shop, travel, and otherwise enjoy American freedoms as these same officials seek to prosecute the defender of those very freedoms," the top US diplomat said.

'An escalation and an unacceptable attempt to interfere'

The ICC expressed "profound regret at the announcement of further threats and coercive actions, including financial measures, against the Court and its officials, made earlier today by the Government of the United States."

"These attacks constitute an escalation and an unacceptable attempt to interfere with the rule of law and the Court's judicial proceedings," it said in a statement. "They are announced with the declared aim of influencing the actions of ICC officials in the context of the Court's independent and objective investigations and impartial judicial proceedings.

"An attack on the ICC also represents an attack against the interests of victims of atrocity crimes, for many of whom the Court represents the last hope for justice."

"The ICC stands firmly by its staff and officials and remains unwavering in its commitment to discharging, independently and impartially, the mandate bestowed upon it by the Rome Statute and the States that are party to it," the statement said, referencing the treaty that established the court.

In a separate statement, O-Gon Kwon, the president of the Assembly of States Parties -- the management oversight and legislative body of the ICC -- denounced the administration's moves, saying they "undermine our common endeavor to fight impunity and to ensure accountability for mass atrocities."

"I deeply regret measures targeting Court officials, staff and their families," Kwon said. "I will convene an extraordinary meeting of the Bureau of the Assembly next week to consider how to renew our unwavering commitment to the Court."

The ICC prosecutor Bensouda sought authorization in November 2017 to open an investigation into crimes connected to the conflict in Afghanistan. According to documents from the time, Bensouda's office determined that there was "a reasonable basis to believe" that members of the Afghan National Security Forces, the US armed forces and the CIA had committed "war crimes," including torture and rape.

Although Bensouda's initial request for authorization to open the investigation was denied in April 2019, in March, the ICC Appeals Chamber ruled unanimously in favor of allowing the investigation.

Defense Secretary Mark Esper said that the administration expected "information about alleged misconduct by our people to be turned over to US authorities so that we can take the appropriate action as we have consistently done so in the past."

"Ultimately, our justice system ensures that our people are held to account under the United States Constitution, not the International Criminal Court or other overreaching intergovernmental bodies," Esper said at the State Department alongside Pompeo, Attorney General William Barr and national security adviser Robert O'Brien.

None of the officials took questions from the press.

In his remarks Thursday, Barr said "the US government has reason to doubt the honesty of the ICC." He claimed the Justice Department had "substantial, credible" information about longstanding "financial corruption and malfeasance at the highest levels of the office of the prosecutor" and expressed concern "that foreign powers like Russia are also manipulating the ICC in pursuit of their own agenda." Barr did not elaborate on or provide evidence for those claims, which were also contained in McEnany's statement. Russia withdrew as a signatory to the ICC's founding statute in 2016.

The administration's moves to deter the investigations through sanctions have already drawn condemnation on the world stage. On Thursday, EU High Representative for Foreign Affairs Josep Borrell called Trump's executive order a "matter of serious concern."

Dutch Foreign Minister Stef Blok said he was "very disturbed" by the US measures against the ICC, which is headquartered in his country.

"We call on the US not to sanction ICC staff. The Netherlands fully supports the ICC and will continue to do so. The ICC is crucial in the fight against impunity and in upholding international rule of law," he wrote Thursday on Twitter.

UN spokesperson Stephane Dujarric said the reports of the planned sanctions were "concerning to us," adding that they would "continue to closely follow developments" on the matter.

"Countries that support international justice should publicly oppose this blatant attempt at obstruction," Prasow said in a statement.

Amnesty International Advocacy Director Daniel Balson argued in a statement that "the vague and open-ended language in the executive order could leave open the possibility that NGO workers, activists, foreign government officials, and others working to advance international justice may find themselves implicated by these obstructive measures."

'Taking on the role in being a major critic'

However, prior to Thursday's announcement, there was some opposition outside of the administration to the ICC's inquiries.

In early June, The Military Coalition, "a group of 34 military, veterans and uniformed services organizations," wrote to Trump to express "deep concern" at the ICC's Afghanistan investigation. In mid-May, more than 300 bipartisan lawmakers from the House and Senate wrote to Pompeo in opposition of the international court's potential probe into Israel.

Orde Kittrie, a former State Department lawyer and current senior fellow at the Foundation for Defense of Democracies, argued that "the ICC's charter authorizes it only to investigate crimes committed by personnel whose national justice systems are 'unwilling or unable' to conduct their own investigations."

Kittrie acknowledged that Thursday's step is controversial, but told CNN that it is "not an end in itself." He said countries that fund the ICC would likely have to weigh in for there to be enough leverage on the court to meet the administration's demands.

"There's an open debate over whether the ICC can drag the soldiers and officials which aren't parties to the treaty before it," said John Yoo, a former senior Justice Department official and current visiting scholar at American Enterprise Institute. "The United States is taking on the role in being a major critic and objector of the ICC."

Yoo noted that John Bolton, Trump's former national security adviser, was one of the original and most outspoken critics of the ICC and he was able to get the President to join his objections to the court's practices.

This story has been updated to include additional reaction.

CLARIFICATION: This article has been updated to reflect more than 300 members of Congress wrote to Pompeo to express opposition to the potential ICC probe into Israel.