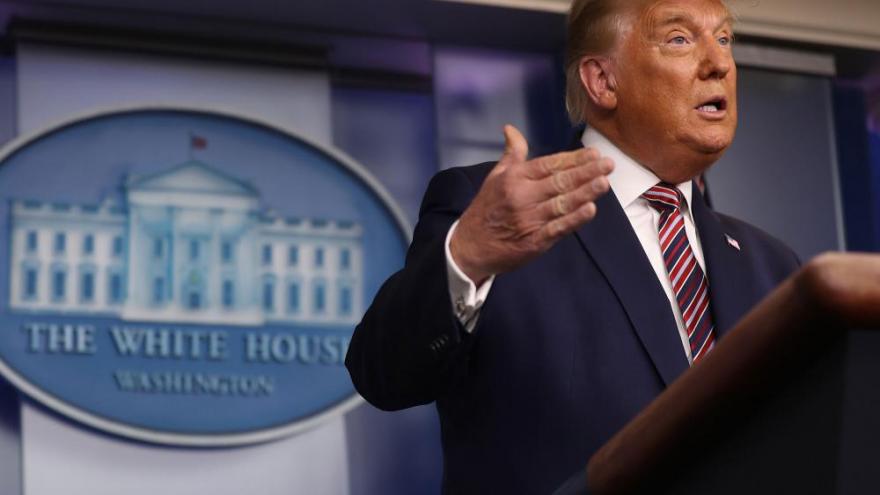 President Donald Trump speaks in the briefing room at the White House on November 5, 2020 in Washington, DC. He has awarded the Medal of Freedom to wrestler and coach Dan Gable.

(CNN) -- President Donald Trump awarded the Medal of Freedom to wrestler and coach Dan Gable in the Oval Office on Monday, making him the first wrestler in history to receive the honor.

"No one has done more to promote wrestling in America than Dan Gable. He's an athletic giant who conquered one of the most difficult and ancient sports in the world," Trump said during the ceremony. "He's the greatest wrestler, probably, ever. We've never had anybody like him. He's made our country very proud. And he's a true GOAT. You know what GOAT is? GOAT? Greatest Of All Time."

The ceremony marked the second time in one week that the President bestowed the medal among an audience where many were not social distancing or wearing masks.

Those in the Oval for Gable's ceremony included Iowa Republican Sens. Joni Ernst and Chuck Grassley, who returned to his Senate office last week after testing positive for the coronavirus.

"I thank you very much for giving this kid here the opportunity to reach this level of the highest award a civilian can get, the Presidential Medal of Freedom. ... And to the sport of wrestling, being the first to win this award becomes a higher challenge to all that participate," Gable said when accepting the medal.

During the ceremony, Trump also bragged about being "2-0" in his number of election wins, despite losing the 2020 presidential race.

Describing Gable's collegiate record, Trump said: "He won 117 consecutive matches and lost only one. Well, you know, in politics, I won two, so I'm 2-0, and that's pretty good, too. But we'll see how that turns out."

As a wrestler, Gable compiled a 117-1 record while at Iowa State University, was a two-time NCAA wrestling champion, and earned a gold medal at the 1972 Olympics, representing the United States.

As a coach at the University of Iowa, Gable's teams won 15 NCAA national team titles, and 12 of the athletes he coached went onto become Olympians. He also coached five Olympic Games.

Trump has held two other Medal of Freedom ceremonies at the White House since the coronavirus pandemic hit the United States.

Trump announced at a rally in October that he would give the medal to Gable.

The Medal of Freedom is bestowed to "individuals who have made especially meritorious contributions to the security or national interests of the United States, to world peace, or to cultural or other significant public or private endeavors," according to the White House.

Trump has diverged from some of his predecessors, who took to celebrating several Medal of Freedom honorees at large, public ceremonies inside the White House. The President has instead often chosen to hold ceremonies for individual honorees, sometimes with limited press in the Oval Office.