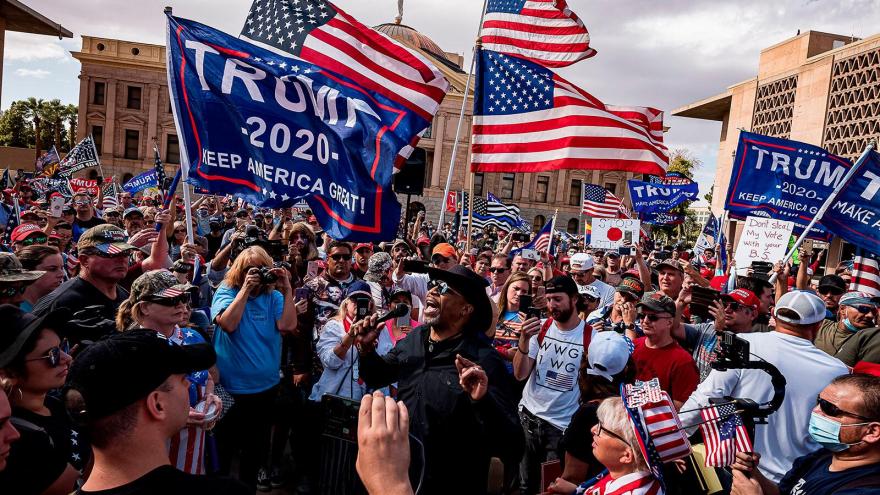 Supporters of US President Donald Trump demonstrate in front of the Arizona State Capitol in Phoenix, Arizona, on November 7, 2020.

(CNN) -- Lawyers for the Trump campaign have dropped a lawsuit seeking a review of all ballots cast on Election Day after finding that the margin of victory for the presidential contest in Arizona could not be overcome.

The Trump campaign filed the lawsuit on Saturday alleging some voters were confused on Election Day and feared that their ballots were not counted if the vote tabulation machines classified their ballots as overvotes. They were seeking a hand review of any ballots flagged by the machine as overvotes alleging it could result in thousands of votes for President Donald Trump.

CNN has projected that President-elect Joe Biden will win the state.

"As we've said, the Trump campaign's lawsuit was frivolous and their motion to withdraw any claims of relief related to the presidential campaign confirms that this was nothing more than a waste of time," the Biden campaign said in a statement. "President-Elect Joe Biden won Arizona, and now it's time to unite the country and move forward."

"Since the close of yesterday's hearing, the tabulation of votes statewide has rendered unnecessary a judicial ruling as to the presidential electors," wrote Kory Langhofer, a lawyer for the Trump campaign. He said he did want the judge to rule on their requests to review votes for two down-ballot races.

Lawyers for Maricopa County and Secretary of State filed papers on Friday noting that the difference in votes between Biden and Trump is 11,414 with 10,315 ballots left to be counted. The county also said there were 191 votes classified as overvotes in the presidential race, a number they said was "consistent" with previous contests.

The Trump campaign had initially sought a review of all overvotes, but on Thursday, Langhofer revised his request, telling the judge that he would only seek a review of vote counts if the number of so-called overvotes exceeded the margin of victory.

Earlier, the judge threw out paper and electronic affidavits the Trump campaign collected from voters after Langhofer acknowledged that some of the forms were "spam" and not legitimate voters.

"Let me just clarify," Judge Daniel Kiley said to the Trump attorney. "Your solicitation of witnesses yielded some sworn affidavits that you yourself clearly determined are false and spam, as you phrased it?"

"The ones that you couldn't prove are false you submitted to the court?" the judge said before granting the county's request to exclude the evidence.