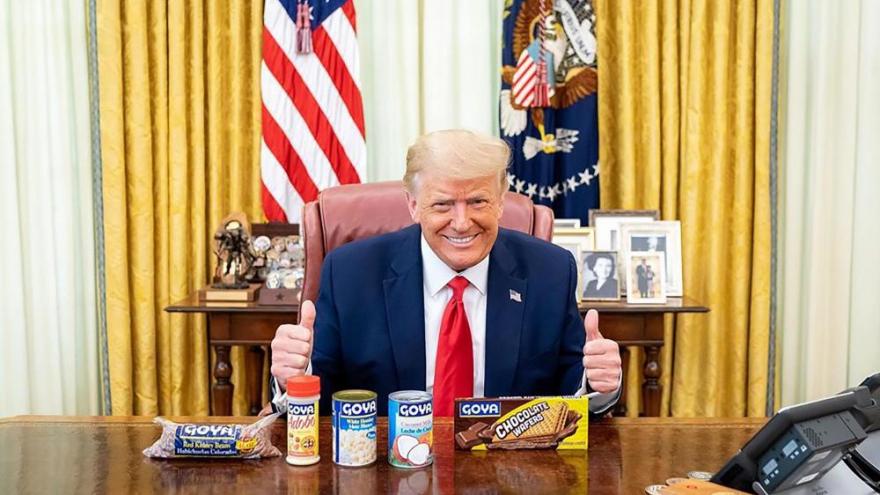 (CNN) -- President Donald Trump's campaign is leaning into the controversy surrounding the Trump administration's relationship with Goya Foods, releasing a wave of Spanish-language TV and radio ads, most of which will air in heavily Hispanic Florida ad markets, that the campaign says, "highlight the Democrats' shameful smear campaign" against the nation's largest Hispanic-owned food company.

The ads, including a TV ad narrated in Spanish by Cuban actress Susana Pérez, claim that "now the left has launched a smear campaign against Goya, the brand we love, just because Goya is working with President Trump," before encouraging supporters to text "GOYA" to the campaign to opt-in for text message alerts from the Trump team.

"We are all truly blessed ... to have a leader like President Trump who is a builder," he said during an appearance in the Rose Garden, adding, "we have an incredible builder, and we pray. We pray for our leadership, our President."

The comments quickly spread online, with hashtags #Goyaway and #BoycottGoya trending shortly after.

The backlash prompted others to rally around the brand. Texas Republican Sen. Ted Cruz said that boycotts of the company meant "the Left is trying to cancel Hispanic culture and silence free speech," and Ivanka Trump defended the brand by posting a photo of herself holding a can of black beans.

"If it's Goya, it has to be good," the President's daughter, a White House adviser, captioned the photo in which she displayed the canned frijoles Vanna White-style. She added in a translation: "Si es Goya, tiene que ser bueno."

Experts told CNN that Ivanka Trump's support of the privately held business could constitute an ethics violation because the United States Office of Government Ethics, which is aimed at "preventing conflicts of interest in the executive branch," has guidelines on endorsements.

"Executive branch employees may not use their Government positions to suggest that the agency or any part of the executive branch endorses an organization (including a nonprofit organization), product, service, or person," the office's guideline states, though the President has shown little likelihood of pursuing disciplinary action following previous White House ethics violations.

The President also posted a photo of himself in the Oval Office posing behind a collection of Goya products, after tweeting earlier that day Goya was "doing GREAT."

The Trump campaign, in a statement announcing the ad campaign Wednesday, also lambasted Democrats, including former Democratic presidential candidate Julián Castro and New York Democratic Rep. Alexandria Ocasio-Cortez, for "viciously go[ing] after a Hispanic business that employs thousands of people, offers academic scholarships to our kids, and operates humanitarian missions to help the people of Cuba, Venezuela, and Puerto Rico."

Castro, who formerly served as Housing and Urban Development secretary, acknowledged Goya's "staple" status in Latino households, but he encouraged people to reconsider buying Goya after Unanue's White House appearance. And Ocasio-Cortez, whose family is Puerto Rican, tweeted about searching for alternatives to a signature Goya seasoning when the video surfaced online.

The campaign also criticized presumptive Democratic nominee Joe Biden, saying, "Amid growing leftist intolerance, violence, and calls to cut police funding, Joe Biden's silence is deafening. ... Now, with the left's assault on Goya, it's clear that not even your abuela's Sazón would be safe in Joe Biden's America."

CNN has reached out to the Biden campaign for comment. The former vice president has not publicly commented on Unanue's comments or the subsequent Goya boycotts.