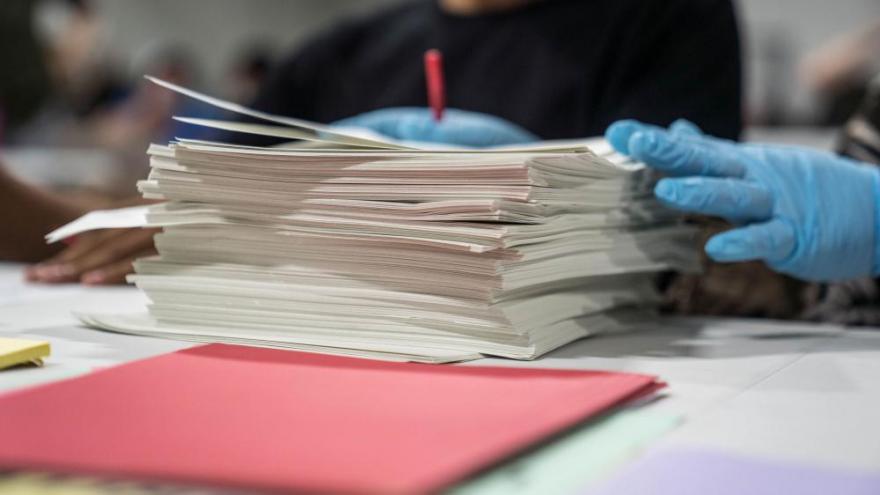 Gwinnett County election workers handle ballots as part of the recount for the 2020 presidential election at the Beauty P. Baldwin Voter Registrations and Elections Building on November 16, 2020 in Lawrenceville, GA.

(CNN) -- Georgia will conduct another recount of its presidential ballots following a Trump campaign request Saturday, but the recount is extremely unlikely to change his loss in the state.

"Because the margin is still less than 0.5%, the President can request a recount after certification of the results. That recount will be conducted by rescanning all paper ballots," Georgia Secretary of State Brad Raffensperger had said in a statement on Friday after a state audit of the presidential results had been completed.

President-elect Joe Biden, who was declared the winner Friday as the state certified the results, has a 12,670 vote or .2% lead over President Donald Trump in Georgia.

Under Georgia law, the Trump campaign had two business days from Friday's certification to request the recount, which will be taxpayer-funded.

"Today, the Trump campaign filed a petition for recount in Georgia. We are focused on ensuring that every aspect of Georgia State Law and the U.S. Constitution are followed so that every legal vote is counted. President Trump and his campaign continue to insist on an honest recount in Georgia, which has to include signature matching and other vital safeguards," the Trump campaign said in a statement.

"Last week's recount reaffirmed what we already knew: Georgia voters selected Joe Biden to be their next president. As the Secretary of State said, there is no reason to believe there are widespread errors or fraud and the Trump campaign has no evidence to back up their baseless claims," said Jaclyn Rothenberg, the Georgia communications director for Biden's campaign. "Any further recount will simply reaffirm Joe Biden's victory in Georgia a third time."

Signature matching for mail-in ballots is not done in recounts, however, according to campaign law expert Jonathan Diaz, a CNN contributor. Comparing of signatures on envelopes of mail-in ballots to those on file is done earlier in the process. The Trump campaign was upset more ballots were not thrown out because of signature issues.

Diaz said "no recount is going to change" the margin of more than 12,000 votes.

"There's no real point in them doing so, other than to continue to drag out this process and cause further delays," Diaz said. "It is a time of nonsense," he said of the recount request. "The war is over."

This story has been updated to include additional context and a statement from the Biden campaign.