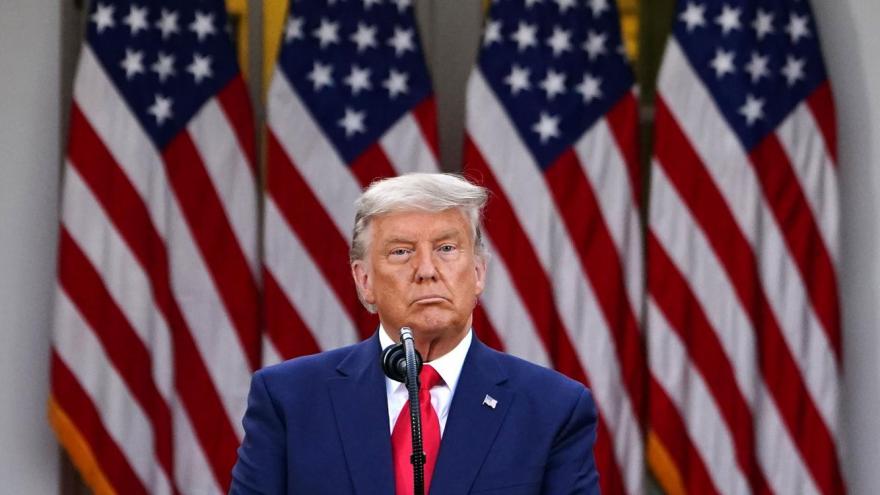 President Donald Trump delivers an update on "Operation Warp Speed" in the Rose Garden of the White House in Washington, DC on November 13, 2020.

(CNN) -- The Trump campaign said Wednesday that it will seek a limited recount of two Wisconsin counties. The campaign needs to officially request the recount, and pay an upfront fee, by 5 p.m. CT Wednesday.

Wisconsin election officials confirmed on Wednesday that they received a partial payment of $3 million from the Trump campaign. These officials said last week that the price tag for a statewide recount would be approximately $7.9 million.

CNN projected that President-elect Joe Biden will win Wisconsin. According to unofficial results, Biden leads President Donald Trump by 20,470 votes, or 0.62%. Trump has refused to concede and instead has promoted conspiracy theories about voter fraud.

The Trump campaign is limiting its Wisconsin recount requests to Milwaukee County and Dane County, according to a press release from the campaign. The money paid by the Trump campaign would be enough to pay for recounts in these counties, which are Democratic strongholds.

Milwaukee County contains Milwaukee, the state's largest city and home to the largest Black population in Wisconsin. Biden beat Trump by 317,251 votes to 134,355 in that county, according to unofficial results from the Wisconsin Election Commission.

Dane County includes the state capital of Madison, home to a many college-age voters at the University of Wisconsin. Biden won that county with 260,157 votes to 78,789 votes, according to unofficial results from the Wisconsin Election Commission.

Counties that undergo a recount will have 13 days to recount all their votes, starting on Thursday, according to procedures announced by the Wisconsin Elections Commission. The commission must certify the final results by December 1.

Experts say it's extremely unlikely that the recounts will shift enough votes to overturn Biden's lead of 20,470 votes. (In 2016, a recount requested by Green Party candidate Jill Stein ended up increasing Trump's margin by just 131 votes.)