Trump claims he 'aced' cognitive test but offers no proof 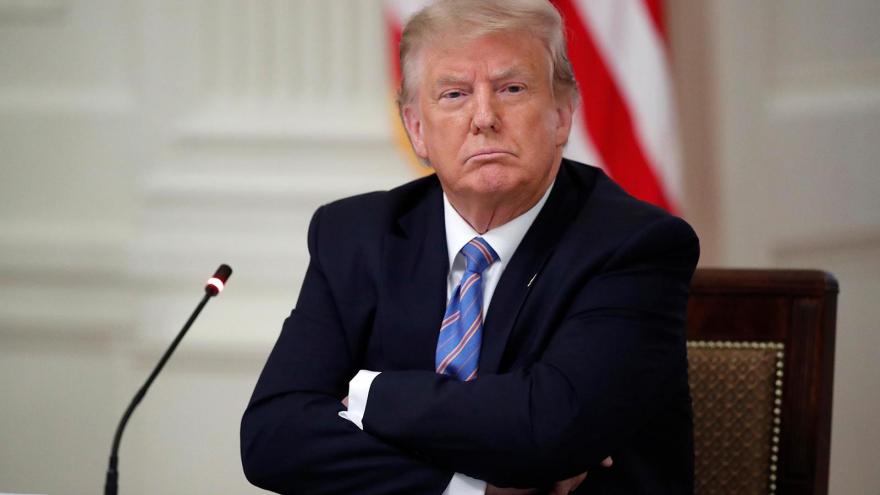 President Donald Trump listens during a "National Dialogue on Safely Reopening America's Schools," event in the East Room of the White House, Tuesday, July 7, 2020, in Washington.

(CNN) -- President Donald Trump claimed on Thursday that he recently "aced" a cognitive test, his latest attempt to dismiss questions about his mental capabilities and attempt to call into question those of presumptive Democratic presidential nominee Joe Biden.

The White House would not provide details of the test or say whether he was referring to a more recent evaluation than the one he underwent in 2018.

Trump said on Thursday he took the test at Walter Reed National Medical Center. He took a cognitive test there in 2018 after requesting one, his physician at the time told reporters, adding that he did not believe such tests were standard for presidents to take.

It was not clear whether Trump was referring to this test or a more recent one, and White House officials did not reply when questioned about it.

"I proved I was all there because I aced it. I aced the test," Trump told Fox News' Sean Hannity, saying he took the cognitive test "very recently."

The President described it as a "very standard test" he took at Walter Reed in front of doctors, who he claimed were "very surprised" by his "unbelievable" results.

Trump's comments reflect his ongoing obsession with presenting himself as someone of above-average intelligence, particularly in the face of critics calling into question his mental and cognitive faculties. And in recent months, the 74-year-old Trump has swung those attacks around and made them central to his campaign against Biden, 77, accusing him of lacking the intelligence and cognitive capacity to be President.

One official's understanding is that Trump was referring to the cognitive test he took at Walter Reed in 2018, not a new test that could have been administered in November when he made an unexpected visit to the hospital. But that official could not say for certain which test Trump was referencing.

In 2018, the President's then-physician Ronny Jackson said Trump took the Montreal Cognitive Assessment, which is used by doctors to detect "mild cognitive dysfunction," and said Trump received a perfect score. The 30-point test takes about 10 minutes and asks the patient to perform a simple batch of memory and mental tasks.

Scoring highly on the test indicates the individual is not suffering from a mild cognitive dysfunction, but does not indicate that the person possesses above-average cognitive capabilities.

Jackson said such testing wasn't originally in the plan for the physical, but that Trump had requested the exam be done. Trump has been referring to this test a lot in meetings, saying Biden couldn't have passed, the official told CNN.

Trump -- who has frequently boasted about his intellect, going so far as to once tweet he is a "VERY STABLE GENIUS" -- claimed without evidence Thursday that Biden has not taken a cognitive test and challenged him to take the same test he did.

Biden, however, told a reporter during a campaign event last month that he's "been tested and I'm constantly tested" as it relates to his cognitive abilities. Biden's advisers say he was referring to the everyday rigors of being on the campaign.

Trump's general medical status has frequently been the source of speculation.

In June, the White House provided a positive look at an annual physical, saying the President's cholesterol was down from previous years, but it has never provided a complete explanation for an abrupt November trip to Walter Reed the White House claimed was meant to get an early start on his yearly physical.

At the time, the White House said it was a "routine checkup," though it was unannounced and wasn't even on the President's internal schedule the morning he went there.

Since the results of his physical were released, new questions about the President's health were raised when he appeared unsteady while descending a ramp at West Point's commencement ceremony. Trump later raised the episode repeatedly, insisting his leather shoes made walking on the surface difficult.