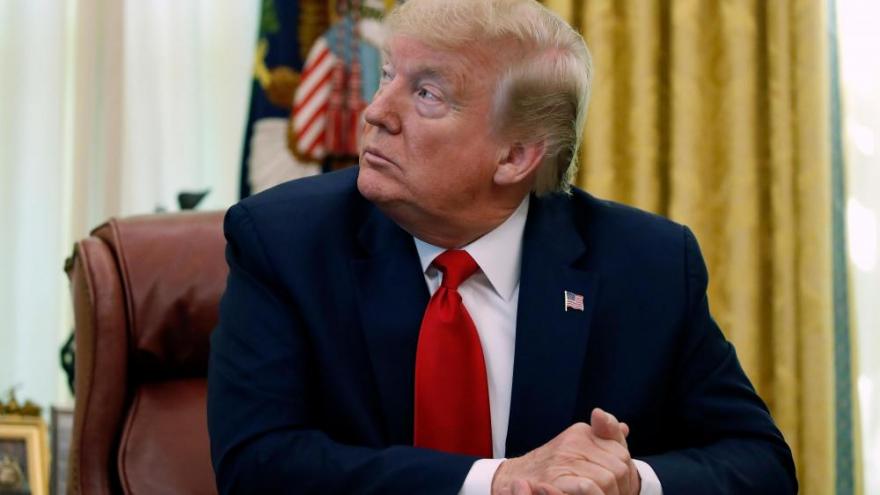 President Donald Trump listens during a meeting with Daniel O'Day, CEO of Gillead Sciences Inc., in the Oval Office of the White House, Friday, May 1, 2020, in Washington.

(CNN) -- President Donald Trump claimed Sunday that the US intelligence community "did NOT bring up the CoronaVirus subject matter until late into January" and that "they only spoke of the Virus in a very non-threatening, or matter of fact, manner."

The Washington Post also reported last week that US intelligence agencies included warnings about the coronavirus in more than a dozen classified briefings prepared for the President in January and February.

Trump said Sunday night that he was first briefed about coronavirus on January 23 and indicated the US intelligence agencies would be issuing a statement in the coming days.

Office of the Director of National Intelligence spokesperson Susan Miller told CNN that the intelligence community declassified a couple of lines about when the President was briefed and provided them to the White House this past week.

She called the President's timeline accurate: He was first briefed by the intelligence community on January 23, she said, and at that time he was told that the good news was the virus did not appear that deadly.

And national security adviser Robert O'Brien told CNN's Vivian Salama and Kylie Atwood last week that he first briefed the President on the coronavirus on January 23.

While Trump claims he was told that "there could be a virus coming in," that January 23 briefing came three days after the first confirmed case of coronavirus in the United States.

The President was also briefed by Health and Human Services Secretary Alex Azar about the threat of the coronavirus during a January 18 phone call, according to multiple reports.

Trump also said that at the time, the US intelligence community was not "competently run."

While claiming that he was only briefed about the coronavirus in late January, Trump did not address why he continued to downplay the threat of the virus in January, February and March.

As late as March 9, Trump continued to downplay the threat of coronavirus, comparing it to the flu despite public health experts' warnings against such a comparison.

Trump also falsely claimed in his tweet that those allowed into the US from China "were heavily scrutinized and tested U.S. citizens." Passengers returning to the United States from China were not tested at airports, though there had been some basic screening and a request that those passengers self-quarantine for 14 days.

Trump's claims join a list of deflections throughout the pandemic as the President has sought to combat negative perceptions about the US response. By Sunday, more than 1.1 million people in the US were infected with the virus, and more than 67,000 had died, according to the latest data from Johns Hopkins University.