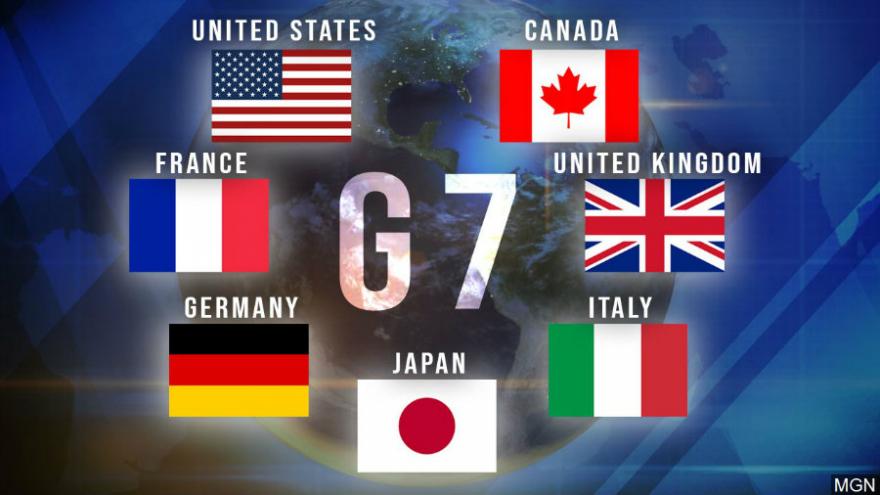 (CNN) -- President Donald Trump on Saturday accused Canadian Prime Minister Justin Trudeau of making "false statements" and said that the US will not endorse a G7 communique.

"Based on Justin's false statements at his news conference, and the fact that Canada is charging massive Tariffs to our U.S. farmers, workers and companies, I have instructed our U.S. Reps not to endorse the Communique as we look at Tariffs on automobiles flooding the U.S. Market!," the President tweeted on Saturday.

In a second tweet, President Trump said, "PM Justin Trudeau of Canada acted so meek and mild during our @G7 meetings only to give a news conference after I left saying that, 'US Tariffs were kind of insulting' and he 'will not be pushed around.' Very dishonest & weak. Our Tariffs are in response to his of 270% on dairy!"

Shortly after Trudeau said that he was "happy to announce that we have released a joint communique by all seven countries" indicating that the US had signed on, Trump announced the US would reverse its decision and not sign on to the statement after all. The group of seven nations that make up the G7 are Canada, France, the United States, the United Kingdom, Germany, Japan and Italy.

The G7 communique references a number of shared priorities, including on trade, economic growth, national security and sustainability. At one point, the agreement states, "we acknowledge that free, fair and mutually beneficial trade and investment, while creating reciprocal benefits, are key engines for growth and job creation."

Trump's tweets taking aim at the leader of a country that has long been a US ally came after the President left the G7 summit in Canada to travel to Singapore ahead of a planned diplomatic meeting with North Korean Leader Kim Jong Un.

Trudeau said Saturday during a news conference that Canada will "move forward with retaliatory measures" on July 1 in response to the Trump administration's decision to impose tariffs on steel and aluminum imports from Canada, the European Union and Mexico.

"I have made it very clear to the President that it is not something we relish doing, but it something that we absolutely will do," Trudeau said. "Canadians, we're polite, we're reasonable, but we also will not be pushed around."

Trump addressed the subject of international trade during an impromptu news conference at the summit on Saturday, saying that he does not want to see other countries take advantage of the US over trade.

"It's going to change," he said. "Tariffs will come way down. We're like the piggy bank that everybody is robbing and that ends."

The Canadian prime minister's office responded to Trump's tweets accusing Trudeau of "false statements" on Saturday, saying that the Prime Minister said nothing during the G7 summit that he had not said previously.

"We are focused on everything we accomplished here at the #G7 summit. The Prime Minister said nothing he hasn't said before — both in public, and in private conversations with the President," the statement read.

"Our national security relationship with Canada is vital and saves American lives. It was built over generations and is bigger than any person or dispute. This too shall pass," said Comey in the post.