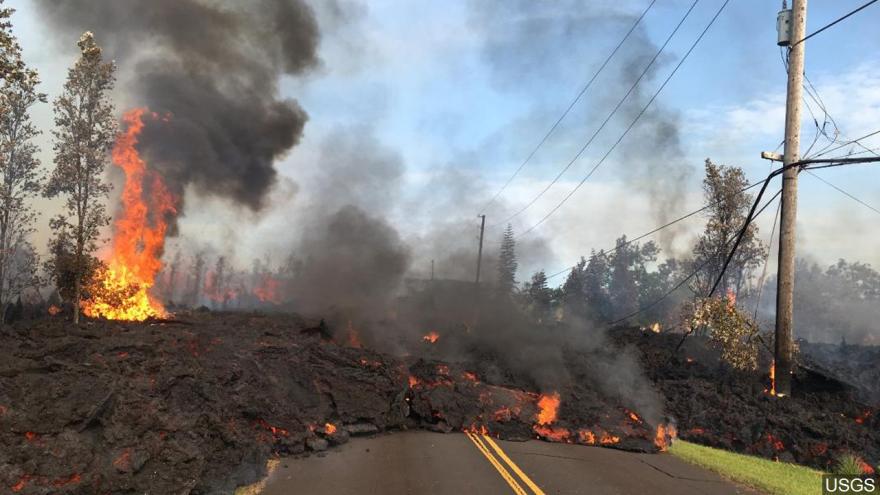 The declaration allows federal assistance to supplement state and local recovery efforts in areas affected by the Kilauea volcanic eruption and earthquake.

The Kilauea volcano erupted May 3, leaving the future of hundreds of people in Hawaii's Big Island uncertain.

The threat of violent explosions prompted authorities to close the Hawaii Volcanoes National Park on Friday until further notice.

The volcanic vents, or fissures, on the ground that released slow-moving lava and toxic gas into island communities are still a hazard.

A new, 16th fissure was reported Saturday along the existing vent system. No significant lava was reported from any of the vents but "additional outbreaks of lava are likely," the US Geological Survey's Hawaiian Volcano Observatory said.

The HVO also said an explosive eruption is possible at Halemaumau crater at the top of the Kilauea volcano. Such an eruption could generate ash plumes over an area 12 miles from the summit crater, the HOV said.

Volunteers are assisting about 300 evacuees who have been sleeping at emergency shelters. Lawmakers are concerned it could take weeks or even months before they can return home, CNN affiliate Hawaii News Now reported.

Hazardous fumes continue to be released, putting the health of residents and emergency crews in danger.

There are high levels of sulfur dioxide, which can cause headaches and irritation to the lungs and eyes if inhaled at higher concentrations, the University of Hawaii at Hilo says.

The lava emission appears to have paused since Wednesday but scientists are warning residents of acid rain, falling ash and eruptions that could occur in coming weeks.

It's uncertain how big the explosions could be but scientists have said that the Kilauea volcano appears to be mimicking behavior last seen in 1924.

New lava outbreaks can begin "at any time" as well as "more energetic ash emissions," the USGS warned.