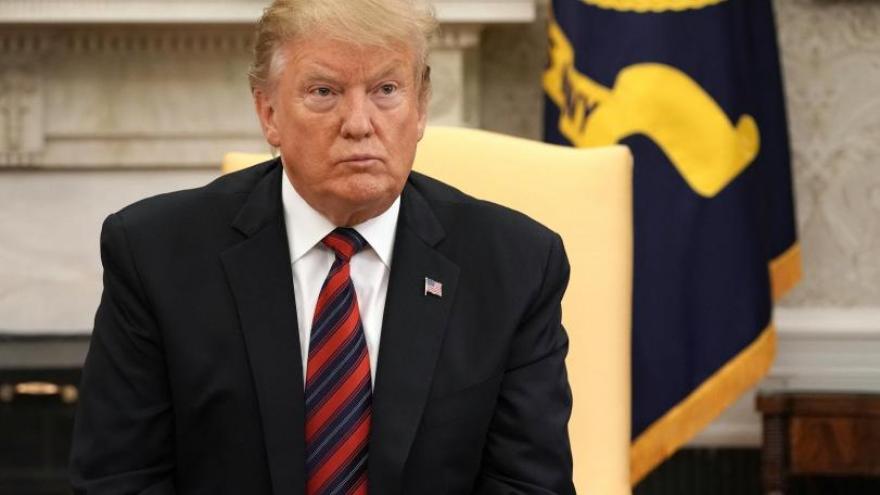 The Trump administration has declared an emergency to bypass Congress and expedite billions of dollars in arms sales to various countries -- including Saudi Arabia and the United Arab Emirates -- citing the need to deter what it called "the malign influence" of Iran throughout the Middle East.

(CNN) -- The Trump administration has declared an emergency to bypass Congress and expedite billions of dollars in arms sales to various countries -- including Saudi Arabia and the United Arab Emirates -- citing the need to deter what it called "the malign influence" of Iran throughout the Middle East.

"These sales will support our allies, enhance Middle East stability, and help these nations to deter and defend themselves from the Islamic Republic of Iran," Pompeo said in a statement that put the value of the sales at $8.1 billion.

In a Friday letter to congressional lawmakers, Pompeo said that he "determined that an emergency exists, which requires the immediate sale of the defense articles and defense services" to Saudi Arabia, the UAE and Jordan "in order to deter further the malign influence of the Government of Iran throughout the Middle East region," according to a copy obtained by CNN.

The notification comes on the same day as President Donald Trump's announcement that he is sending an additional 1,500 US troops to the Middle East to counter Iran. Pompeo noted in his statement that "today's action will quickly augment our partners' capacity to provide for their own self-defense and reinforce recent changes to US posture in the region to deter Iran."

Overall, the State Department listed more than 20 proposed sales, according to a congressional source.

CNN reported earlier Friday that the Trump administration was planning to announce its decision to use a pre-existing rule that would allow it to expedite arms sales to allies in the Middle East. The move drew bipartisan condemnation, with lawmakers decrying the precedent it sets, questioning the administration's claims of an emergency and raising the issue of Saudi Arabia's human rights record and the killing of journalist Jamal Khashoggi.

Pompeo directly addressed lawmakers' unhappiness in his statement, saying, "I intend for this determination to be a one-time event." He noted that the provision has been used by at least four previous administrations since 1979, and said "this specific measure does not alter our long-standing arms transfer review process with Congress."

But he cast blame at Congress as well.

"Delaying this shipment could cause degraded systems and a lack of necessary parts and maintenance that could create severe airworthiness and interoperability concerns for our key partners, during a time of increasing regional volatility," Pompeo said. "These national security concerns have been exacerbated by many months of Congressional delay in addressing these critical requirements, and have called into doubt our reliability as a provider of defense capabilities, opening opportunities for U.S. adversaries to exploit."

A US official tells CNN that the arms packages for UAE and Saudi Arabia will include surveillance aircraft and maintenance, as well as training programs, advanced precision kill weapon guidance systems and Javelin missiles.

Rep. Michael McCaul of Texas, the top Republican on the House Foreign Affairs Committee, called the administration's move "unfortunate" in a statement.

While noting he understood the frustration that "key members of Congress held these arms sales for an extended period," he added that "The President's decision to use an emergency waiver on these sales is unfortunate and will damage certain future congressional interactions."

"The Trump Administration formally informed Congress that it is invoking an obscure provision of the Arms Export Control Act to eliminate the statutorily-required Congressional review of the sales of precision-guided munitions to Saudi Arabia, the United Arab Emirates and others, but failed to explain its legal or practical basis for doing so," New Jersey Sen. Bob Menendez, the top Democrat on the Senate Foreign Relations Committee, said in a statement.

'Disappointed, but not surprised'

"I am disappointed, but not surprised, that the Trump Administration has failed once again to prioritize our long-term national security interests or stand up for human rights, and instead is granting favors to authoritarian countries like Saudi Arabia," he added.

The committee's Republican chairman, Sen. Jim Risch, told CNN that he has "received formal notification of the administration's intent to move forward with a number of arms sales" and is reviewing the legal justification for this action.

Section 36 of the Arms Control Act allows the White House to forgo the traditional 30-day congressional notification period for arms sales of the President declares an emergency, thereby preventing Congress from being able to put a hold on any arms deals.

"President Trump is only using this loophole because he knows Congress would disapprove of this sale," Sen. Chris Murphy, a Connecticut Democrat, said in a statement. "There is no new 'emergency' reason to sell bombs to the Saudis to drop in Yemen, and doing so only perpetuates the humanitarian crisis there. This sets an incredibly dangerous precedent that future presidents can use to sell weapons without a check from Congress."

"We have the constitutional duty to declare war and the responsibility to oversee arm sales that contravene our national security interests. If we don't stand up to this abuse of authority, we will permanently box ourselves out of deciding who we should sell weapons to," Murphy added.

Sen. Dianne Feinstein, the California Democrat who sits on the Senate Intelligence Committee, said that Trump's decision to sell arms outside the standard review process "is unacceptable" and that Khashoggi's murder changed her view of Riyadh.

"My whole view of Saudi Arabia changed with the murder of Jamal Khashoggi," Feinstein said.

"I will not support another Saudi arms sale, and I urge all of my Senate colleagues to stand up for congressional prerogative and block the President's end-run around the law."