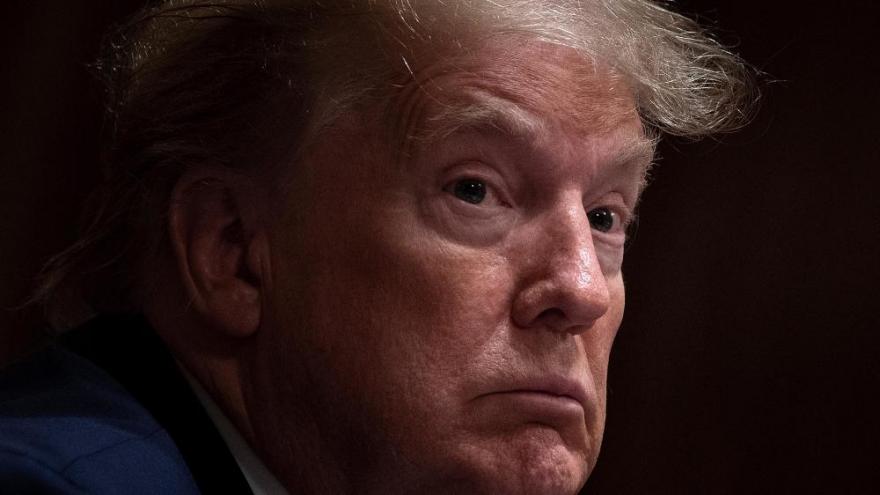 President Donald Trump listens during a meeting on Opportunity Zones in the Cabinet room of the White House May 18, 2020, in Washington, DC.

(CNN) -- President Donald Trump announced Friday that his administration is issuing guidance deeming places of worship "essential" during the coronavirus pandemic, calling on governors to reopen religious institutions for services.

Trump threatened to "override" governors if their states did not follow the new federal recommendations, but it was unclear what authority the President was referring to. The recommendations are voluntary.

"Some governors have deemed liquor stores and abortion clinics essential, but have left out churches and houses of worship. It's not right. So I'm correcting this injustice and calling houses of worship essential," Trump said during his announcement at the White House.

Trump said he was calling upon governors to "allow churches and places of worship to open right now."

"If there's any question, they're going to have to call me, but they're not going to be successful in that call," Trump added.

"The governors need to do the right thing and allow these very important essential places of faith to open right now, this weekend. If they don't do it, I will override the governors," he continued.

"I think each one of the leaders in the faith community should be in touch with their local health department so they can communicate to their congregants. Certainly, people that have significant comorbidities, we want them protected. I know those houses of worship want to protect them," Birx said. "Maybe they can't go this week if there's high numbers of Covid cases. Maybe they wait another week. But there is a way to social distance ... in places of worship."

McEnany, asked about Birx's response, said the decision to reopen based on the new federal guidance is "up to the governors."

McEnany would not explain what authority Trump would use to "override" governors' decisions to keep places of worship closed.

The new guidance released by the US Centers for Disease Control and Prevention Friday recommends religious institutions provide soap and hand sanitizer, encourage the use of cloth masks and clean their facilities daily if they want to open while coronavirus is still spreading. These institutions should also promote social distancing and consider limiting the sharing of objects such as books and hymnals, the CDC said.

The guidelines also offer leeway to organizations to make their own decisions about what they should do to limit the spread of the virus, and the guidelines are described by the CDC as "general considerations," "suggestions" and "non-binding public health guidance for consideration only."

They do not mandate that houses of worship open on Memorial Day weekend.

A senior administration official told CNN that the guidance had been initially delayed because some officials believed the proposals were too detailed and would be impossible for churches and others to achieve. There was also talk of putting out no guidance at all on religious services, but Trump had conversations with CDC officials and urged them to issue something.

The White House coronavirus task force finalized the guidance during a meeting on Thursday, the source said.

The President referred to the conversations with CDC officials on Thursday, telling participants and the press at a listening session with African Americans, "I said, 'You better put it out.' "

As Trump has pressured localities and states to reopen amid the coronavirus pandemic, he's put particular weight on the reopening of places of worship.

He said in April that it would be "beautiful" for churches to be open and "packed" on Easter Sunday. He later said the date was aspirational.

Ahead of Easter Sunday, he advised faith leaders to wait for the country to "get healed" from the coronavirus pandemic before holding services in person.

But more recently, the President has lamented that digital religious services aren't the same as in-person ones.

"People want to be in their churches. It's wonderful to sit home and watch something on a laptop, but it can never be the same as being in a church and being with your friends. And they want to have it open, and I think that's going to be happening... very shortly," Trump said during Thursday's listening session.

Large gatherings, like those in houses of worship, have been linked to clusters of coronavirus. This month, two churches in northern California linked the spread of coronavirus among church members and clergy to Mother's Day services. A Texas church recently canceled its masses after one of its priests died and five others subsequently tested positive for the coronavirus.

The Southern Baptist Convention said Friday it was "pleased" with Trump's decision.

But the Interfaith Alliance and the Council of American-Islamic Relations said Friday that they oppose the call to open places of worship amid the pandemic.

CAIR said that American Muslim scholars and community leaders have already determined that public religious activities will be restricted due to the pandemic and that is unlikely to change despite the new guidance.

Representatives of two of Judaism's major branches, Reform and Conservative, said Trump's declaration does not change their stance and that their members are not expected to hold religious services soon. CNN has also reached out to a representative of the Orthodox branch for comment.