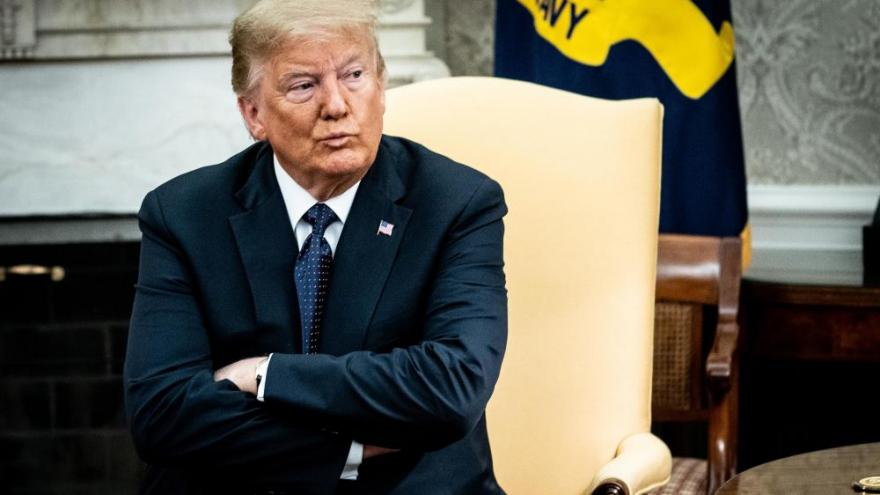 President Donald Trump looks on during a meeting with Polish President Andrzej Duda in the White House on June 24, 2020. As American institutions remove symbols or names tied to racist ideology, they have found a consistent opponent in the president.

(CNN) -- As American institutions remove symbols or names tied to racist ideology, they have found a consistent opponent in President Donald Trump.

From Confederate statues to airports named for a movie star who once said he believed in white supremacy, the President has decried steps that would strip racists of their monuments and memorials -- siding instead with those who would keep the honors intact.

It's a stance increasingly out of step with public opinion and with the direction taken by other onetime bastions of white conservative culture, such as NASCAR. As the country engages in a renewed reckoning about race and history, aides have said Trump's defiance on the issue reflects his adamance that "heritage" and "history" are winning sentiments for the voters who propelled him to the White House and who he believes will grant him a second term.

Yet Trump's own actions have muddled the idea that his motives are purely about preserving American history. As he denounces the changes to racist monuments, Trump voiced encouragement -- inadvertently, according to aides -- to a group of his supporters, one of whom shouted, "White power."

And he promoted a video of a White couple brandishing weapons as peaceful Black protesters marched past their ornate mansion, images that underscored an ongoing racial divide.

Aides and people around him have denounced everything from the removal of "Gone with the Wind" -- one of Trump's favorite movies -- to the rebranding of Aunt Jemima pancake syrup, discounting stereotypes that have long been called racist.

Combined with his efforts to protect federal monuments, Trump's continued reliance on racist rhetoric and tropes has only exacerbated racial tensions that have been escalating after the police killing of George Floyd on May 25, an event that prompted protests and a new reckoning on racist symbols in America.

Beyond simply expressing his opposition to the changes, Trump has aggressively sought the prosecution of people who have defaced or destroyed statues in American cities. This week he has tweeted FBI wanted posters seeking information about people who defaced a statue of Andrew Jackson near the White House. He wrote Tuesday morning that he was "tracking down" vandals who threw red paint on "magnificent" statues of George Washington in Manhattan and encouraged them to surrender themselves to police.

"Turn yourselves in now!" Trump wrote.

He signed an executive order behind closed doors on Friday that threatens to withhold federal funding from local governments that are unable to protect monuments in their jurisdiction. Whether that threat can be acted upon isn't legally clear, and many viewed the executive order as political theater meant to exploit an emerging cultural divide.

Nevertheless, Trump has continued to side against any renaming or removal attempts, even when those being removed espoused openly bigoted or racist views.

"Can anyone believe that Princeton just dropped the name of Woodrow Wilson from their highly respected policy center," Trump tweeted after the university announced it would remove the 28th President from its public policy school and a residential college.

Princeton's president had said in a statement that the school's board of trustees "concluded that Woodrow Wilson's racist thinking and policies make him an inappropriate namesake for a school or college whose scholars, students, and alumni must stand firmly against racism in all its forms."

As US president, Wilson once called racial segregation "a benefit" and said slaves "were happy and well-cared for." As president of Princeton, he denied admission to African American men and sought to exclude them from the school's history. The decision to remove his name was hailed by former first lady Michelle Obama, who graduated from Princeton in 1985.

As President, Trump has not cited Wilson extensively and has shown greater affinity for other presidents, like Jackson, a slave owner whose portrait hangs in the Oval Office. Still, Trump's shock that Wilson's name would be removed followed his pattern of opposing any attempts to rebrand or remove historic markers.

In the same tweet, Trump lambasted efforts to rename an airport in Orange County, California.

"Now the Do Nothing Democrats want to take off the name John Wayne from an airport," he wrote. "Incredible stupidity!"

Democrats in Orange County are pushing to rename the airport, citing the Western movie star's professed support of white supremacy in a 1971 Playboy interview, in which he espoused derogatory views of African Americans, Native Americans and movies with gay characters.

"While some outside Orange County may not know of John Wayne's beliefs in white supremacy, many Orange County residents have been calling for his removal for years," county party Chairwoman Ada Briceño said in a statement. "We're seeing renewed calls for this right now, and it's time for change."

In an interview last year, the actor's son, Ethan Wayne, said his dad's words in the Playboy Q&A were being taken out of context and that his father "took everyone at face value."

Trump has long embraced John Wayne's swaggering persona as a conservative archetype worth modeling, be it his exaggerated masculinity or his hardline "law and order" mantra that often disregards due process. Trump visited Wayne's Iowa birthplace during his 2016 presidential bid, where he stood before a waxwork statue of the actor and declared himself a "longtime" fan.

"We love John Wayne," he said as the actor's daughter Aissa declared that if her father were alive he would endorse Trump.

"We need someone like Mr. Trump with leadership qualities, somebody with courage, someone that's strong like John Wayne," she said.

As President, Trump has consistently opposed the removal of Confederate statues and monuments, though he said during a Fox News event last week that he would support placing some statues in museums.

He has not weighed in the Mississippi Legislature's decision to remove the Confederate emblem from its state flag, and White House press secretary Kayleigh McEnany on Monday said only, "That's a decision for Mississippi to make."

Earlier this month, McEnany demonstrated far greater passion when discussing the temporary removal of "Gone with the Wind" from the HBO Max streaming library, a decision she cast as the start of a slippery slope.

"I'm told that no longer can you find on HBO 'Gone with the Wind' because somehow that is now offensive," she said. "Where do you draw the line?"

The movie was later restored to the streaming service with a new introductory disclaimer (HBO and CNN share a parent company, Warner Media).

A person familiar with the matter said Trump himself also railed privately against the removal of "Gone with the Wind," a film that fed racist stereotypes while glossing over the horrors of slavery but that he has hailed as one of the greatest ever made.

Trump cited the film when complaining about this year's Oscar winner for best picture, the South Korean-made "Parasite," during a campaign rally earlier this year.

"Can we get like 'Gone with the Wind' back, please?" he asked after the award ceremony in February.