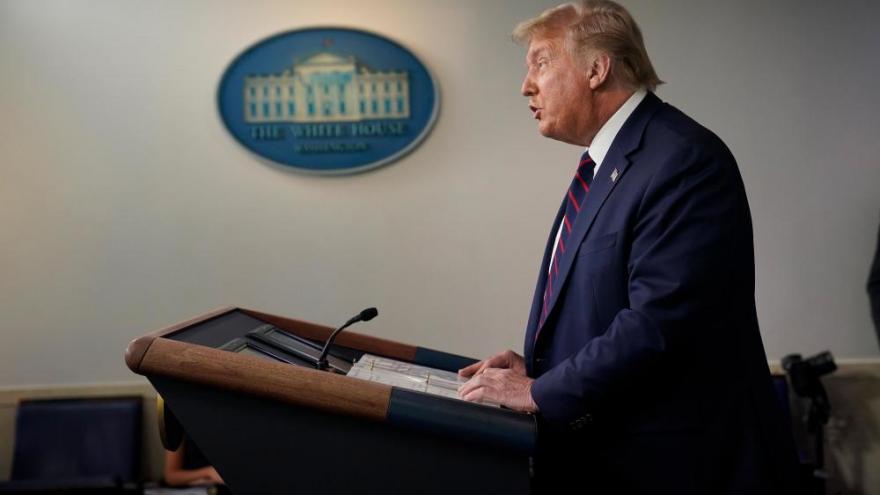 President Donald Trump speaks during a news conference at the White House, Tuesday, July 21, 2020, in Washington.

(CNN) -- At his second coronavirus news conference in as many days, President Donald Trump on Wednesday again appeared alone -- without the public health experts at his side whom Americans have often said they trust on the coronavirus.

Trump told CNN's Kaitlan Collins that he was holding solo news conferences instead of joint briefings with coronavirus task force members because it is a more "concise way of doing it."

"I just spoke to Dr. Fauci. Dr. Birx is right outside and they're giving me all of everything they know as of this point in time, and I'm giving the information to you and I think it's probably a very concise way of doing it. It seems to be working out very well.

Trump touted his relationship with all members of the task force as "very good."

Trump resumed the coronavirus briefings Tuesday after discontinuing them in April, when he declared them a waste of time. Tuesday's briefing, which came amid surging coronavirus cases and dropping poll numbers, was somber in tone and the President appeared to largely stick to his script.

"We'll be doing these quite often. We're going to keep you abreast of this, and we'll also talk about some of the other topics like our economy, which is doing well," Trump said as he concluded Tuesday's briefing, which clocked in at around 30 minutes, significantly shorter than his wide-ranging briefings as the virus spread this spring.

Trump offered a sober assessment of the pandemic, which he has previously claimed was under control, telling reporters Tuesday, "It will probably, unfortunately, get worse before it gets better."

He also made a full-throated appeal for Americans to wear masks, contradicted his press secretary on how frequently he is tested for coronavirus, and did not provide any new plans to increase testing or tracing. He also raised eyebrows when he wished Ghislaine Maxwell "well." Maxwell is charged with recruiting, grooming and ultimately sexually abusing minors as young as 14 as Jeffrey Epstein's alleged accomplice.

Counselor to the President Kellyanne Conway attempted to shift blame for surging coronavirus cases to the nation's governors, claiming that Trump's somber message and changing tone was "not a change," but instead, a reaction to some states that reopened too quickly.

"It's not a change. The briefings stopped, but his work hasn't stopped," Conway said Wednesday.

"I think what he added yesterday is him seeing that some of these states moved through our gated criteria, moved through some of our phases, and they opened up some of the industries a little too quickly like bars," she added, even though it was the President who urged states to reopen.

Governors, Conway said, "wanted complete latitude" over reopening, but Trump "also sees that if he provides information to the public as the President, he's also giving people guidance as to how to do our part to help flatten that curve and to help some of these cities."

This story has been updated with comments from Trump's Wednesday briefing.