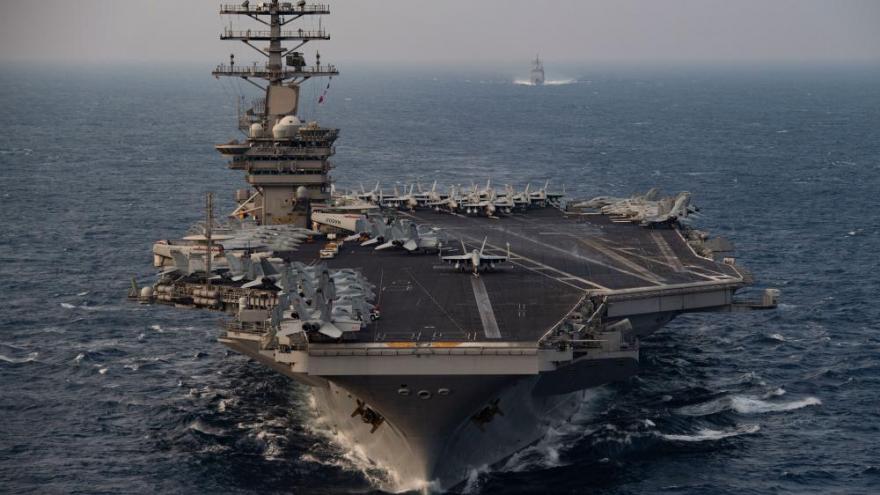 The aircraft carrier USS Nimitz (CVN 68) steams ahead of the guided-missile cruiser USS Princeton while participating in Malabar 2020 in the north Arabian Sea.

(CNN) -- At the direction of President Donald Trump, acting Secretary of Defense Christopher Miller ordered a US aircraft carrier to return to the Middle East following a White House meeting Sunday, according to a senior defense official.

This decision reversed Miller's order last week to send the USS Nimitz out of the region and home, in part, to send a de-escalation signal to Iran amid rising tensions between Washington and Tehran.

One defense official says Miller's idea of de-escalation had not been adopted as a formal, approved policy. It took top commanders by surprise, several defense sources said. US Central Command wanted the carrier to stay in the region because of the policy of Iran deterrence.

The White House and NSC did not immediately respond to CNN's request for comment.

On Sunday, Miller announced that the USS Nimitz would remain in place due to purported Iranian threats "against President Trump and other US government officials." Miller said in a statement that he had "ordered the USS Nimitz to halt its routine redeployment." The carrier will now "remain on station in the US Central Command area of operations," Miller added.

"No one should doubt the resolve of the United States of America," he said.

Last week CNN reported there have been conflicting messages that reflect divisions within the Pentagon on the current threat level from Iran.