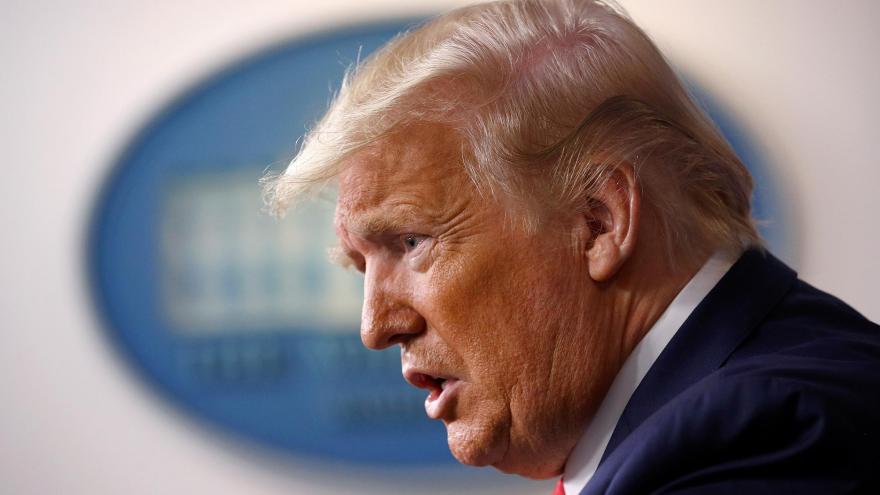 President Donald Trump said Sunday he would extend his social distancing guidelines to April 30 as novel coronavirus continues to spread throughout the US.

(CNN) -- President Donald Trump said Sunday he would extend nationwide social distancing guidelines for another 30 days, an abrupt back-down from his push to reopen the country as coronavirus continues to spread.

The 15-day guidelines Trump announced two weeks ago were set to expire on Monday, and the President had suggested over the past week that he was looking to relax them, at least in some parts of the country. He even floated Easter, on April 12, as a potential date by which the country could return to normal.

But on Sunday he said he'd decided to extend the guidelines -- which include suggested limits on large gatherings -- to April 30, a sign his earlier predictions were overly rosy.

"The better you do, the faster this whole nightmare will end," the President said Sunday at a White House news conference. He said he would be finalizing a new plan and strategy early this week and announcing the details on Tuesday.

The announcement marked an abrupt turnaround from a week ago when Trump said he was convinced the distancing restrictions were causing irreparable damage to the economy.

Even as his health advisers warned of dire consequences if Americans were allowed to return to large gatherings or crowded workplaces, Trump appeared intent on allowing a return to normal life.

On Sunday, however, Trump seemed to acknowledge that the spread of the virus had not slowed, at least not yet. He said that modeling shows that the peak of the death rate will likely hit in two weeks, but stressed that he hopes the country will be on its way to recovery by June 1.

"We can expect that by June 1st, we will be well on our way to recovery, we think by June 1st. A lot of great things will be happening," he said.

Trump reiterated his intent to return life to normal.

"I want our life back again," he said.

The White House's social distancing guidance advises all Americans to avoid groups of more than 10 and urges older people to stay at home.

Over the past week, various options had been discussed among Trump's advisers on possible alternatives -- including allowing some states to return to normal more quickly -- to the current guidelines.

But persistent problems in testing have prevented the full picture of the virus's spread from becoming known, leaving officials without a clear idea of which states were faring better than others.

The scale of the outbreak was given stark urgency Sunday by Dr. Anthony Fauci, the top infectious disease specialist, who predicted on CNN that more than 100,000 Americans could eventually die from coronavirus with millions more infected.

Trump suggested during his briefing that he didn't believe the larger numbers Fauci had mentioned earlier in the day, and called him to the podium.

But Fauci only reiterated the figures he cited earlier.

He said it's "entirely conceivable" that more than a million people in the US could contract coronavirus, but added that mitigation and extending the distancing guidelines through April will hopefully curb those numbers.

Fauci was among the health advisers on Trump's team encouraging a continuation of the current guidelines after Trump heard from business leaders and some conservative allies that the restrictions were more damaging than the virus itself.

Over the course of the past week, however, Trump appeared more wary of lifting the guidelines he had announced himself and which had been branded "President Trump's 15 Days to Slow the Spread."

He said on Friday that his priority in dealing with the virus was Americans' health, not the economy.

And he suggested he was aware that most health professionals would not advise a full-scale return to life as normal.

Questioned Sunday about the Easter date he floated earlier in the week, Trump said it was merely "aspirational."