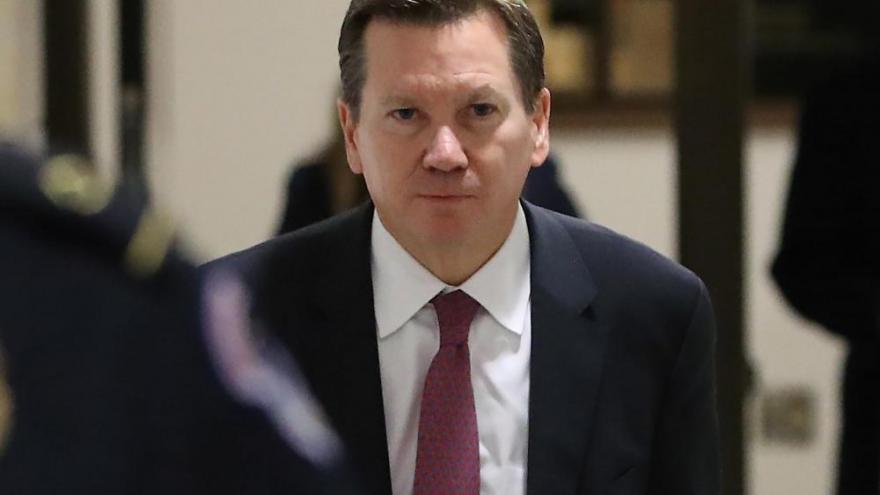 Michael Atkinson, Inspector General of the Intelligence Community, arrives at the U.S. Capitol on October 4, 2019 in Washington, DC

(CNN) -- President Donald Trump on Friday fired Intelligence Community Inspector General Michael Atkinson, who had told Congress about the whistleblower complaint that led to Trump's impeachment, the President told Congress in a letter obtained by CNN.

Atkinson will leave his job in 30 days, Trump told the House and Senate Intelligence committees, and he has been placed on administrative leave effective immediately, according to a congressional source.

Trump did not name a permanent successor.

The announcement that he's firing Atkinson late on a Friday night comes as the President is dealing with a worldwide pandemic from the novel coronavirus, which has consumed his presidency since the end of the impeachment trial only two months ago. Trump has faced widespread criticism for the federal government's response to the outbreak, and has said the impeachment trial "probably did" distract him from responding to the virus' outbreak during the trial in January and early February.

Atkinson's firing is the latest case of the Trump administration removing officials who took part in the President's impeachment. Trump also removed Alexander Vindman, a then-National Security Council official who had testified in the House's proceedings, along with Vindman's twin brother, both of whom were reassigned out of the NSC, and fired then-US Ambassador to the European Union Gordon Sondland.

Other officials, including then-US Ambassador to Ukraine Marie Yovanovitch and her acting successor, Bill Taylor, left the Trump administration after the impeachment proceedings.

Trump also fired former FBI Director James Comey in 2017 while the FBI was investigating the President.

The congressional source said that Atkinson was informed on Friday evening that Trump had fired him. The statute for the intelligence community inspector general requires that both intelligence committees be notified 30 days before the inspector general can be dismissed, so Trump could not immediately remove Atkinson -- he could only place him on leave until the 30 days pass.

Top Democrats on the House and Senate Intelligence committees blasted the move.

House Speaker Nancy Pelosi said in statement that Trump must "immediately cease his attacks on those who sacrifice to keep America safe, particularly during this time of national emergency."

House Intelligence Chairman Adam Schiff of California, who led the House's impeachment investigation, said the firing was "another blatant attempt by the President to gut the independence of the Intelligence Community and retaliate against those who dare to expose presidential wrongdoing."

"This retribution against a distinguished public servant for doing his job and informing Congress of an urgent and credible whistleblower complaint is a direct affront to the entire inspector general system," Schiff said in a statement.

Virginia Sen. Mark Warner, the top Democrat on the Senate Intelligence Committee, said, "In the midst of a national emergency, it is unconscionable that the President is once again attempting to undermine the integrity of the intelligence community by firing yet another an intelligence official simply for doing his job."

Senate Minority Leader Chuck Schumer said the firing was "all too familiar a pattern in this administration."

Atkinson -- a career, nonpartisan official -- came under fire from the President's allies last year for alerting lawmakers to the then-unknown whistleblower complaint, which Congress later learned was an allegation that Trump had sought dirt on his political rival former Vice President Joe Biden from Ukraine's President while withholding US security aid from Kiev.

The allegation sparked a House impeachment inquiry that detailed the quid pro quo effort and led to Trump's impeachment in December on two articles. The Senate acquitted Trump on both charges in February.

One of the former attorneys for the anonymous whistleblower, Andrew Bakaj, told CNN the firing of ICIG Michael Atkinson was not unexpected yet still "disheartening" and "pretty clearly retaliation" for his role in transmitting the initial complaint to Congress.

"I think Atkinson was quite honorable and acted with integrity. The way he handled himself underscored his independence and neutrality. Not all IG's have historically done that," said Bakaj, who no longer represents the whistleblower after they hired new legal counsel earlier this year. "In this case you have an individual who got an allegation, did an investigation and came to an independent conclusion. This is truly a loss to the IG community and also a shot across the bow for any future whistleblowers from coming forward."

Bakaj said Atkinson "had the courage to do what was right" when he shared the whistleblower complaint with Congress despite clashing with his then-boss, then-acting Director of National Intelligence Joseph Maguire, over whether it rose to the level of "urgent concern."

Still, Bakaj told CNN that Atkinson's replacement was ultimately expected and, in some ways, serves as a "bookend" for the impeachment saga. "The door is finally closed," he said, adding that he was alerted that Trump had been planning to fire Atkinson for some time.

Maguire formally resigned from US government service in February after Trump made it clear he would not be nominated for the job full time, a source familiar with the matter told CNN.

Other top intelligence officials also have recently left the administration, after Trump picked US Ambassador to Germany Richard Grenell to replace Maguire as acting director of national intelligence. Russ Travers, who was head of the National Counterterrorism Center, was fired last month by Grenell in a move that was seen as a removal of someone not perceived as loyal enough.

Tom Monheim, a career intelligence official, will be the acting intelligence community inspector general, according to the Office of the Director of National Intelligence.