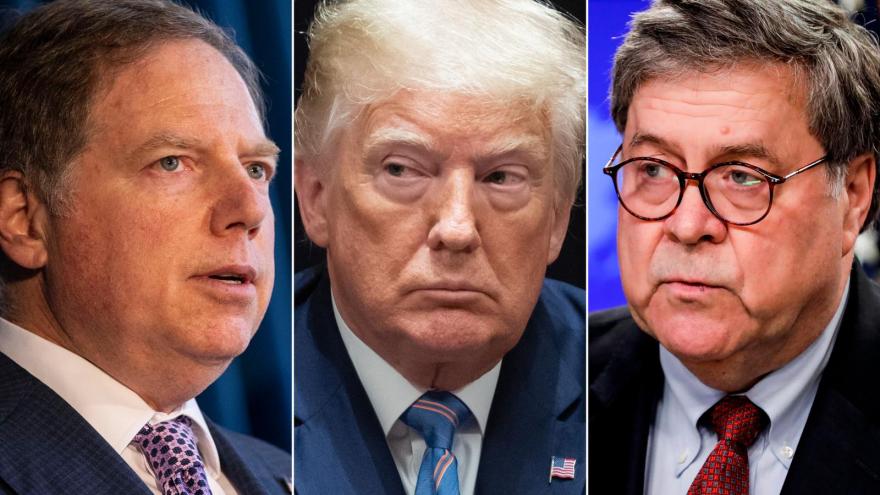 Attorney General Bill Barr(right) said Saturday that President Donald Trump(center) has fired the Geoffrey Berman (left), the US attorney for the Southern District of New York.

(CNN) -- Attorney General Bill Barr said Saturday that President Donald Trump has fired Geoffrey Berman, the powerful US attorney for the Southern District of New York who has investigated a number of associates of the President.

"Because you have declared that you have no intention of resigning, I have asked the President to remove you as of today, and he has done so," Barr wrote in a letter to Berman. "By operation of law, the Deputy United States Attorney, Audrey Strauss, will become the Acting United States Attorney, and I anticipate that she will serve in that capacity until a permanent successor is in place."

The remarkable escalation comes after Barr tried to oust Berman on Friday, but he defied him by refusing to step down. In an extraordinary statement sent roughly an hour after Barr said Berman was set to leave the office, Berman said he had learned of his purported exit from a press release.

"I have not resigned, and have no intention of resigning, my position, to which I was appointed by the Judges of the United States District Court for the Southern District of New York. I will step down when a presidentially appointed nominee is confirmed by the Senate," Berman said. "Until then, our investigations will move forward without delay or interruption."