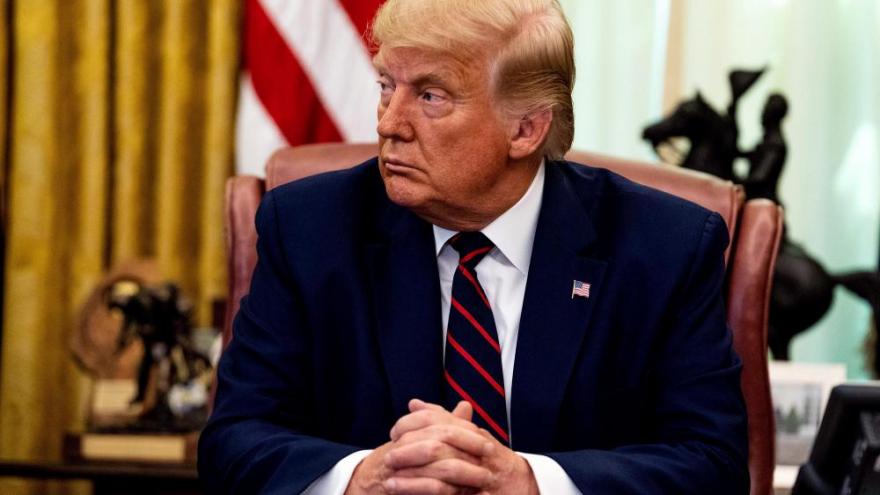 U.S. President Donald Trump participates in a signing ceremony and meeting with the President of Serbia Aleksandar Vucic and the Prime Minister of Kosovo Avdullah Hoti in the Oval Office of the White House on September 4, 2020 in Washington, DC.

(CNN) -- President Donald Trump has repeatedly questioned why Americans who served in Vietnam went to war, according to someone who has heard him make the remarks.

The President, who received a draft deferment for bone spurs, has suggested in those conversations that Vietnam veterans didn't know how to exploit the system to get out of serving.

Men between the ages of 18-26 had to serve in the military for 21 months under the draft unless they were given a deferment. In January 1973, once the US ended its direct involvement in Vietnam, the US announced it was going to an all-volunteer army. In 1975, President Gerald Ford signed a proclamation ending the requirement for men to register for the draft.

Trump has also questioned, generally, the point of going to war in Iraq and Afghanistan, given his belief those wars were ill-advised. The President has wondered aloud "what did they get out of it?," the same source told CNN.

The source spoke with CNN following Trump's forceful denial of a story in The Atlantic magazine Thursday that he had disparaged US service members killed in battle and chose to skip a ceremony honoring veterans.

The Atlantic specifically reported that Trump didn't want to attend a ceremony at the Aisne-Marne American Cemetery in France in 2018 because he was concerned that the rain would ruin his hair. Trump said the US Secret Service prevented him from flying to attend the ceremony due to the weather conditions.

Later Saturday, a former senior administration official confirmed to CNN that Trump referred to fallen US service members at the Aisne-Marne cemetery in crude and derogatory terms during the November 2018 trip to France to commemorate the 100th anniversary of the end of World War I.

The former official, who declined to be named, largely confirmed reporting from Jeffrey Goldberg in The Atlantic magazine.

Fox News, the Associated Press, the New York Times and the Washington Post have also corroborated various parts of The Atlantic's reporting.

Trump has adamantly denied that he holds anything but the utmost respect for American service members.

"To me, they're heroes," he said in the Oval Office Friday. "It's even hard to believe how they could do it. And I say that, the level of bravery, and to me, they're absolute heroes."

He called The Atlantic article a "fake story," and he and the White House have pointed to his increase in military spending and a pay raise for military troops.

Trump has a complicated history with Vietnam. Along with his medical deferment for bone spurs, Trump also received four deferments from the Vietnam War draft due to education.

In an interview in the late 1990s, Trump, known for being a fixture in the New York tabloids at the time, made light of military service in Vietnam by comparing it to avoiding sexually transmitted diseases in the New York dating scene.

During the 2016 campaign, Trump attacked Republican Sen. John McCain's service in the Vietnam War, stating in 2015 that McCain was not a war hero because he was captured by the North Vietnamese and held as a prisoner of war.

In a statement Saturday, Rep. Adam Smith, the Democratic chairman of the House Armed Services Committee, called Trump "incapable of performing the duties of Commander-in-Chief."

"The President claims he loves the military, because it's part of his political strategy, but when the mics are off and the cameras are no longer rolling he has shown his true colors," Smith said. "He has no respect for our military; he views our service members as window dressing for his cosplay of the American presidency."