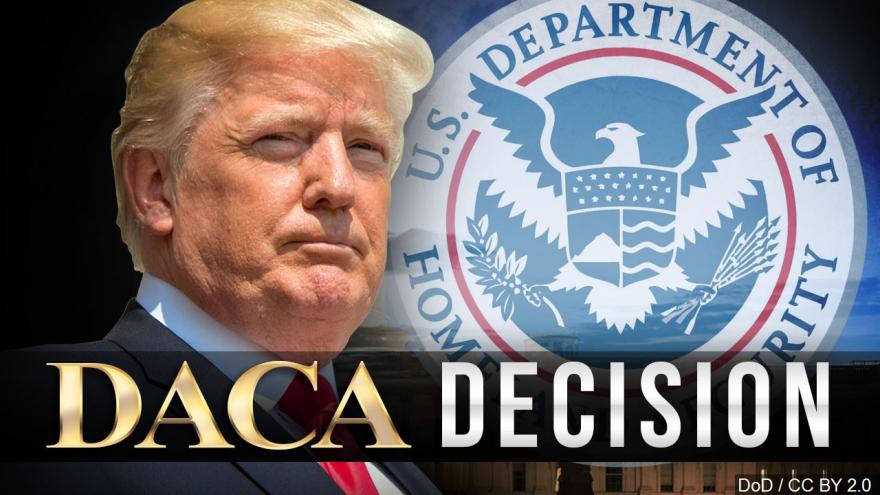 (CNN) -- President Donald Trump is meeting with bipartisan lawmakers on Tuesday to discuss a way to protect and keep thousands of young undocumented immigrants, who are protected under the Deferred Action for Childhood Arrivals program, from having to leave the country.

The goal is to reach an agreement between Democrats and Republicans, while still accomplishing Trump's campaign goal of building a border wall and deporting undocumented immigrants -- something Democrats widely oppose.

In the background, details are still being worked out on what a plan to help recipients of DACA would look like, and a bipartisan group of Senate lawmakers led by Democrat Dick Durbin of Illinois and Republican Lindsey Graham of South Carolina continues to negotiate.

Speaking in the Cabinet Room in the White House with Republican and Democratic lawmakers, Trump urged people to "put country before party" but said he would not protect hundreds of thousands of young undocumented immigrants from deportation without funding for a border wall along the US-Mexico border and a series of immigration changes.

So far, lawmakers involved in negotiations to protect those in the DACA program are frustrated with how negotiations are unfolding.

Republicans charge that Democrats have all but halted talks on spending caps until there is a resolution on DACA, which gives undocumented immigrants who came to the country as children a chance to stay, work or study in the US without fear of deportation.

A GOP congressional source involved in immigration talks told CNN that with two dozen lawmakers expected in a room at the White House with Trump, there won't be much hard negotiating. The source said the purpose of the meeting is to show that Trump is actually working with Democrats on the issue.

Republicans had a meeting among themselves on Capitol Hill last night with Department of Homeland Security Secretary Kirstjen Nielsen that went relatively well, according to the source.

Various players are working on some of the sticking points, such as "chain migration" -- or family-based sponsorship options -- and interior enforcement.

A group of Democrats are arguing to hold firm on DACA because if things collapse, they would hopefully win the House and have more leverage in 2019. That's an argument GOP lawmakers who want a deal are making to Trump to convince him he has maximum leverage now that will wane.

Lawmakers want Trump's chief of staff John Kelly, who previously served as head of the Department of Homeland Security, to be the point person on the negotiations because they want someone who understands the issue and is constantly invested in talks, the source told CNN. Lawmakers also consider him a more rational negotiating partner than White House senior adviser Stephen Miller, who has ruled on Trump immigration policy.

The source told CNN that Miller is involved in talks, but Kelly has taken charge.

The distrust has run deep for months, as lawmakers feel that Kelly has not lived up to the image of himself he presented to Congress early in his tenure -- when he was confirmed as homeland security secretary by a wide bipartisan margin.

Kelly often discussed being open to meeting with Democrats as much as Republicans, and spoke of sympathy toward the DACA population.

But despite that initial promise seen in Kelly, lawmakers have since felt a series of disheartening decisions has changed that calculus -- including the decision to end DACA while he was chief of staff and a series of decisions to end Temporary Protected Status by the administration since -- including reporting that he was involved in calling acting Secretary Elaine Duke and pressuring her on the Honduras TPS decision, which Duke later denied.

The frustrations have bubbled up publicly, perhaps most starkly on display when Democratic Rep. Luis Gutierrez of Illinois took to the House floor in September and "General Kelly, when he was the head of Homeland Security, lied straight to the faces of the Congressional Hispanic Caucus about preventing the mass deportation of (DACA recipients). ... General Kelly is a hypocrite who is a disgrace to the uniform he used to wear."

The intervening months have not improved relationships between Kelly and Democratic lawmakers.

Who's attending the meeting

Also on the list to attend the Tuesday meeting are a host of lawmakers who would be expected, including Durbin and Democratic Sen. Bob Menendez of New Jersey, a 2013 immigration reform veteran. The list also includes red state Democrats like Sens. Heidi Heitkamp of North Dakota and Jon Tester of Montana, as well as Democratic Rep. Henry Cuellar of Texas, who frequently votes with Republicans on immigration and border issues -- a sign that the White House is looking to pick off as many Democrats as it can even if it can't work with the party's key negotiators.

Republican Reps. Martha McSally of Arizona and Raul Labrador of Idaho are both also attending.