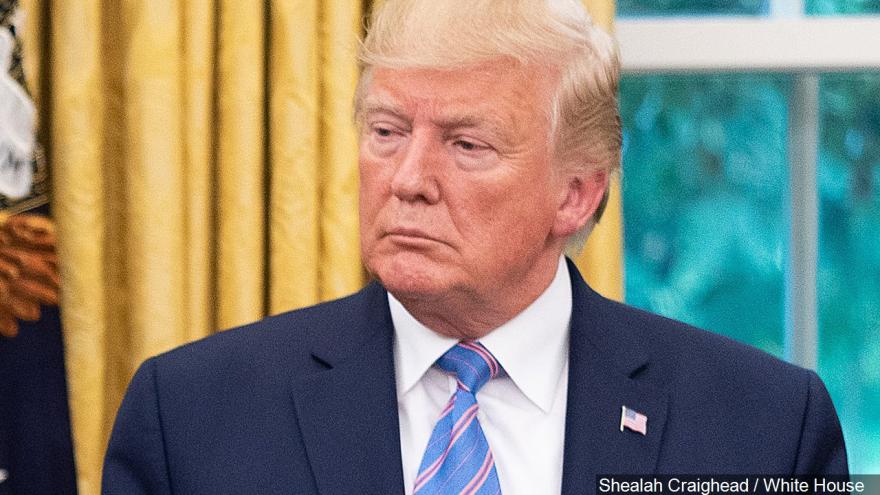 (CNN) -- Twenty members of the faith community gathered in the Oval Office to meet with President Donald Trump on Monday, according to one of the participants. Rev. Bill Owens, the controversial founder of a conservative religious organization, said the President did "more talking than listening" during the event, which was long-scheduled but came after Trump disparaged a top African American lawmaker over the weekend.

Trump tweeted ahead of the meeting that he was "looking forward to" a meeting "with wonderful Inner City Pastors!" The meeting was not open to press but afterward several of the attendees answered a few questions.

"Two hours of discussion, that's not a photo-op," Owens said defending the length and substance of the meeting. He said the leaders discussed "the issues facing the black community, and there are many."

The meeting came the same day as Trump escalated attacks against Rep. Elijah Cummings, a Maryland Democrat, and launched new ones against Rev. Al Sharpton.

Over the past few days, Trump continued his attacks against notable people of color, drawing condemnation from Democrats and progressives, who lambasted the President for his divisive rhetoric. The President notably called Baltimore, a majority African American city which Cummings represents, a "disgusting, rat and rodent infested mess."

Owens pushed back when asked if the meeting was "damage control" for the President's recent comments about Cummings and the city of Baltimore as a whole.

"I have been here five different times in four or five months, so it was not damage control," Owens told reporters outside the Oval Office. He also said he would find it "hard to believe" that the President is a racist, considering what he claimed the President has done for the African American community.

"When you look at the opportunity zones, when you look at what he's doing for our prisoners, which is a main factor," Owens said. "The fact that he met with us today is a factor. He wanted to know from us what should he do in America."

Owens, the founder of the Coalition of African-American Pastors, is a long-time Trump supporter who has equated former President Barack Obama's support of same-sex marriage to supporting child molestation.

"If you watch the men who have been caught having sex with little boys, you will note that all of them will say that they were molested as a child ... " Owens said at a news conference in 2012. "For the President to condone this type of thing is irresponsible." He later walked those comments back, saying he didn't think the President was condoning molestation.

"This country needs healing," he said. "There's so much division in America along racial lines. It's worse than it was years ago, it's worse."

The reverend did say the President was ill-informed when he told four congresswomen of color to "go back" to the countries from which they came.

"I felt that he should have more information because only one was not born in America, so that tells me he had not done his homework on that issue. But I think those four people needed to be criticized," Owens said. But he also added that sometimes, the President doesn't get enough credit.

Another participant in the meeting, Alveda King, side-stepped questions from the reporters, but said that Trump is "concerned about the nation as a whole," and pointed to high employment rates in the African American community.