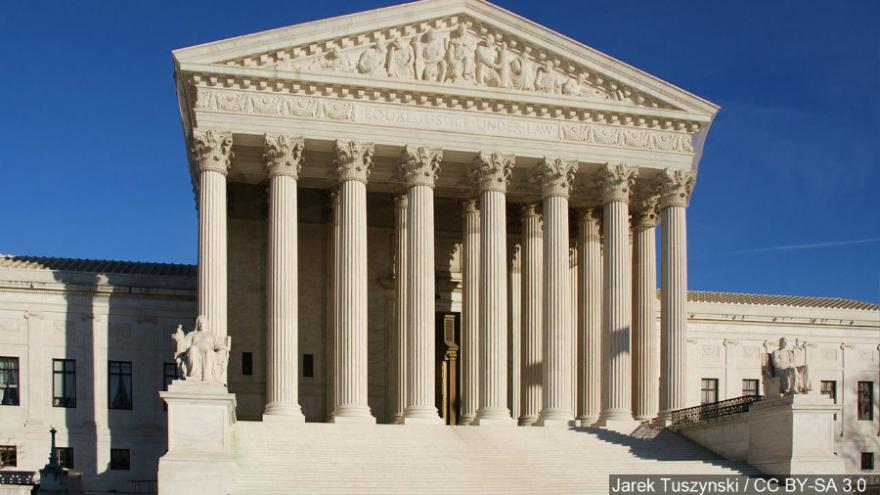 Speaking to reporters at the White House, Trump said he had met with "four potential justices of our great Supreme Court. They are outstanding people and they are really incredible people in so many different ways, academically and in every other way."

Trump added that he would meet with "two or three more" in advance of an announcement July 9 on a replacement for retiring Supreme Court Justice Anthony Kennedy. He consulted with advisers during a weekend at his Bedminster golf club, and the White House has mobilized a team to manage the nomination and confirmation process.

Meanwhile, the Senate's top Democrat tried Monday to rally public opposition to any Supreme Court pick who'd oppose abortion rights, issuing a striking campaign season call for voters to prevent such a nominee by putting "pressure on the Senate."

With Trump saying he'll pick from a list of 25 potential nominees he's compiled with guidance from conservatives, Senate Minority Leader Chuck Schumer said any of them would be "virtually certain" to favor overturning Roe v. Wade, the 1973 case that affirmed women's right to abortion. They would also be "very likely" to back weakening President Barack Obama's 2010 law that expanded health care coverage to millions of Americans, he said.

Schumer said that while Democrats don't control the Senate — Republicans have a 51-49 edge — most senators back abortion rights. In an unusually direct appeal to voters, he said that to block "an ideological nominee," people should "tell your senators" to oppose anyone from Trump's list.

"It will not happen on its own," the New Yorker wrote in an opinion column in Monday's New York Times. "It requires the public's focus on these issues, and its pressure on the Senate."

Trump has said he is focusing on up to seven potential candidates, including two women, to fill the vacancy created by Kennedy, a swing vote on the nine-member court.

Schumer's column appeared a day after Sen. Susan Collins, R-Maine, said she would oppose any nominee she believed would overturn Roe v. Wade. Collins said she would only back a judge who would show respect for settled law such as the Roe decision, which has long been anathema to conservatives.

"I would not support a nominee who demonstrated hostility to Roe v. Wade because that would mean to me that their judicial philosophy did not include a respect for established decisions, established law," Collins said.

Such a judge, she said, "would not be acceptable to me because that would indicate an activist agenda."

Trump spent the weekend at his New Jersey golf club conferring with his advisers, including White House counsel Don McGahn, as he considers his options to fill the vacancy that might make precedent-shattering court decisions on abortion, health care, gay marriage and other issues.

McGahn will lead the overall selection and confirmation process, the White House said Monday. He played the same role in the successful confirmation of Justice Neil Gorsuch last year.

The White House said it is putting together a team for the confirmation process. Spokesman Raj Shah will take leave from his role in the press office to work full time on "communications, strategy and messaging coordination with Capitol Hill allies." And Justin Clark, the director of the Office of Public Liaison, will oversee White House coordination with outside groups.

During his 2016 campaign and presidency, Trump embraced anti-abortion groups and vowed to appoint federal judges who will favor efforts to roll back abortion rights. But he told reporters on Friday that he would not question potential high-court nominees about their views on abortion, saying it was "inappropriate to discuss."

Without Kennedy, the high court will have four justices picked by Democratic presidents and four picked by Republicans, giving Trump the chance to shift the ideological balance toward conservatives for years to come. Both Chief Justice John Roberts and Gorsuch, Trump's first pick to the high court, have indicated more broadly that they respect legal precedent.

On Sunday, Leonard Leo, an outside adviser to Trump on judicial nominations, said he expected Trump to select a nominee who is mindful of precedent but who is also more "originalist and textualist." That judicial approach typically involves a more literal interpretation of the Constitution, and not reading into the Constitution language that doesn't explicitly appear. Roe, for instance, relied on a right to privacy, which is not explicitly mentioned in the Constitution.

Republicans hold a narrow 51-49 majority in the Senate, and it's even closer because of the absence of ailing Sen. John McCain of Arizona. Even though Senate Majority Leader Mitch McConnell changed Senate rules last year to allow confirmation by simple majority, if Democrats hold together, he cannot afford defections. Vice President Mike Pence can be called on to break a tie.

Collins appeared on ABC's "This Week" and CNN's "State of the Union," and Leo spoke on "Fox News Sunday."