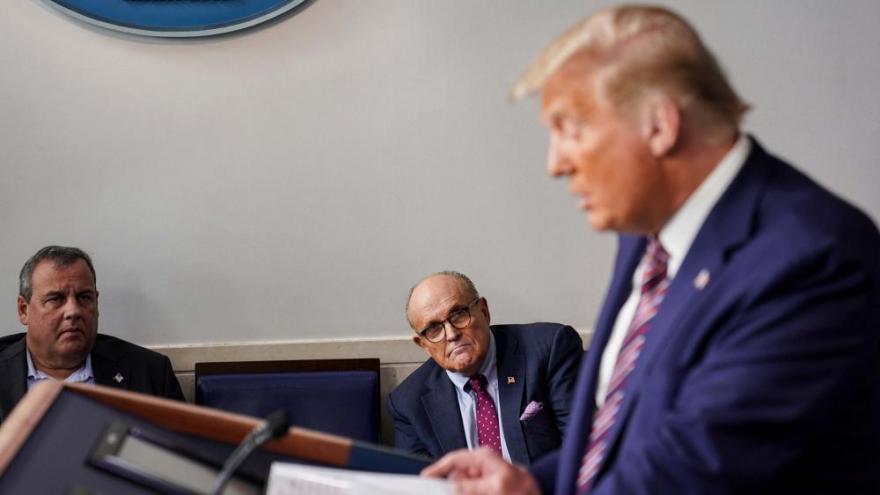 President Donald Trump is expected to join his attorney Rudy Giuliani in Gettysburg, Pennsylvania, where Republican state lawmakers are holding a "hearing" on allegations of fraud in this month's election, two sources familiar with the plans told CNN.

(CNN) -- President Donald Trump is expected to join his attorney Rudy Giuliani in Gettysburg, Pennsylvania, on Wednesday, where Republican state lawmakers are holding a "hearing" on allegations of fraud in this month's election, two sources familiar with the plans told CNN.

Trump has expressed strong interest in joining Giuliani for Wednesday's event and directed aides to make plans for him to travel to Pennsylvania, multiple sources said. The trip, which will be his first outside of the Washington area since Election Day, was not listed on the public schedule released by the White House on Tuesday night, but is being handled internally as an unannounced movement.

State and local election officials have said there is no evidence of widespread voter fraud, and both a federal court and the Pennsylvania Supreme Court have dismissed lawsuits seeking to prevent the state from certifying the results of the election. Pennsylvania officially certified the results on Tuesday, sealing Biden's win in the key battleground state.

"In the United States of America, this cannot justify the disenfranchisement of a single voter, let alone all the voters of its sixth most populated state. Our people, laws, and institutions demand more," Judge Matthew Brann of the US District Court in the Middle District of Pennsylvania wrote on Saturday in a withering decision. "At bottom, Plaintiffs have failed to meet their burden to state a claim upon which relief may be granted."

Brann, a longtime and well-known Republican in Pennsylvania, added: "It is not in the power of this Court to violate the Constitution."

The event is the latest attempt by Trump and his allies to undermine confidence in the 2020 election and attack the legitimacy of President-elect Joe Biden.

Trump and Giuliani have made baseless allegations of fraud in the election and delved into conspiracy theories alleging a plot to rig the vote, all of which have been refuted by state and local election officials across the country as well as the top cybersecurity official at the Department of Homeland Security. Trump fired that official, Chris Krebs, after he co-signed a statement declaring the 2020 election "the most secure" in US history.

Asked for comment about the President's plan to attend the event, White House deputy press secretary Judd Deere told CNN, "I'd refer you to tomorrow's public schedule. I have no additional updates at this time."

It is the first of three similar events the Trump campaign has scheduled in coordination with Republican state lawmakers in Pennsylvania, Arizona and Michigan. There's no evidence that widespread voter fraud has taken place in any of those states despite frequent claims by Trump and his allies.

It's not clear if Trump will speak at the hearing, which his campaign said is also expected to include "testimony from witnesses who have filed affidavits attesting to 2020 election fraud."

The location of Trump's visit is striking. Gettysburg is the site of the most famous battle of the Civil War, in which the Union turned back a Confederate invasion of the North. The battle culminated in a failed charge by troops under the command of Confederate Gen. George Pickett that was repelled by US forces.

Coming just two days after the General Services Administration allowed the presidential transition to proceed, Trump's visit signals once again that he does not intend to abandon his allegations about the election or concede the race to Biden.

One source cautioned that the plans for the trip could change because the White House is handling the trip as an unplanned "off the record" movement.

Trump is also considering attending a similar event in Michigan next week. The Michigan State Board of Canvassers certified Biden's victory in that state on Monday, after Trump's legal efforts and a pressure campaign on state and local officials collapsed.