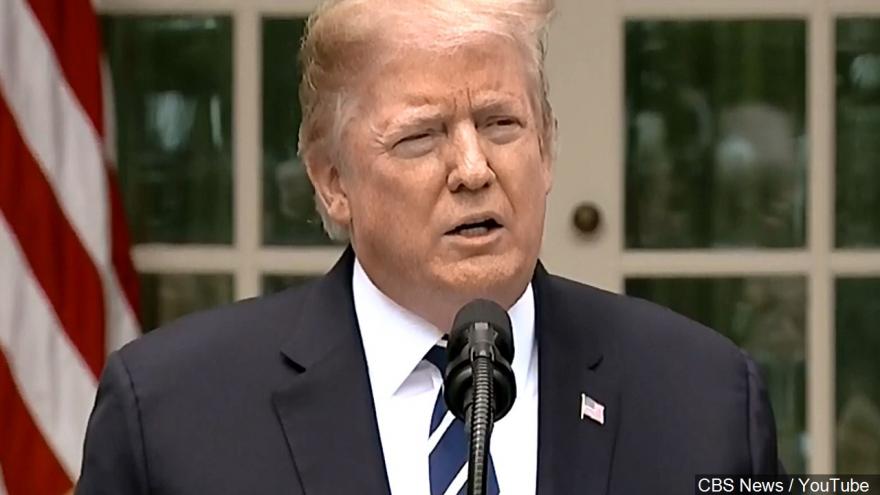 Emperor Naruhito ascended to the throne on May 1, opening what is called the era of "Reiwa," or "beautiful harmony." Trump's "state call" opened with handshakes and greetings from Naruhito and his wife, Empress Masako.

The president, who is on a four-day state visit, was the center of attention at an outdoor welcome ceremony full of pomp and pageantry. The couples stood on a raised platform as the national anthems of both countries were played.

Trump then walked by himself down a red carpet and stood at attention atop another platform, listening to a military band. Then he continued down the red carpet to review Japanese troops while Naruito and both men's wives held back.

Trump showed little emotion, but waved near schoolchildren feverishly waving U.S. and Japanese flags. Some of the children suffered from the heat and were later seen siting with cups of water and cool compresses on their foreheads.

Trump and Naruhito each greeted a long line of officials in each other's delegations before everyone went back inside the palace.

No public words were spoken.

Trump's next stop is Akasaka Palace, the Japanese state guest house, for meetings, a working lunch and joint news conference with Japanese Prime Minister Shinzo Abe, who participated in the palace ceremony. The president also will be the guest of honor at an imperial banquet at the palace hosted by the emperor.