Trump leaves key Democrats in the dark about Baghdadi raid 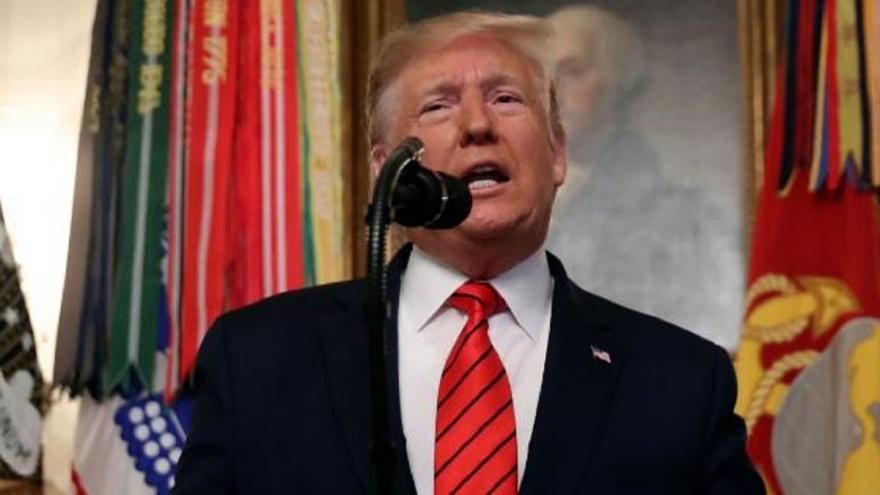 (CNN) -- President Donald Trump admitted on Sunday the White House did not inform some key Democrats about the daring raid that resulted in the death of ISIS leader Abu Bakr al-Baghdadi.

The move to not make notable leaders aware goes against the usual tradition for such high-profile operations. The bipartisan praise for the US mission was undercut by criticism that the Trump administration did not inform congressional leaders about it ahead of time and came amid broader concerns about the strategy in the region after the US removed troops from Syria.

After saluting the "heroism, dedication and skill of our military and our intelligence professionals," House Speaker Nancy Pelosi said that the "Russians but not top Congressional leaders were notified of the raid in advance."

"Our military and allies deserve strong, smart and strategic leadership from Washington," she said in a statement on Sunday.

Senate Minority Leader Chuck Schumer said at an unrelated news conference Sunday in New York that he learned about the death of Baghdadi after seeing it on television.

"I didn't know. I saw it on TV," the New York Democrat said. When asked for his reaction to the news, Schumer added, "My reaction? Look, it's great that we've gotten al-Baghdadi and killed him. He's a dangerous man, an evil man. The fight against ISIS has to continue."

In a statement released later Sunday, Schumer said, "I look forward to receiving a briefing about this raid and the plan to deal with the escaped ISIS prisoners."

House Intelligence Committee Chairman Adam Schiff called the raid an "operational success," but also said he was not informed about the raid before it took place.

"Had this escalated, had something gone wrong, had we gotten into a fire fight with the Russians, it's to the administration's advantage to say, 'We informed Congress we were going in, they were aware of the risks. We at least gave them the chance to provide feedback'," The California Democrat said on ABC's "This Week" on Sunday. "That wasn't done here. I think that's a mistake, but let's not lose sight of the fact that it was a success and a ruthless killer has been taken off the battlefield."

Trump said the administration did not brief lawmakers due to a fear that they would leak information to the news media that could cost American lives, a dismissal of the legislative branch that will only further strain relations with Congress. Pelosi and House leaders launched an impeachment inquiry into Trump in September, deepening a rift between the President and Democrats.

Sen. Lindsey Graham, who has criticized the President over his withdrawal of troops from northern Syria, was present at the President's announcement Sunday morning. He called Baghdadi's death a "game changer."

"When it comes to what's happening in Syria, I like what I see," the South Carolina Republican told reporters, adding that, "the President's position and my position is really not that far off."

"The President changed the rules of engagement," Graham said. "This is a moment where President Trump's worst critics should say: well done, Mr. President."

Senate Majority Leader Mitch McConnell's office would not comment when asked if he knew of the raid beforehand, but McConnell praised the operation.

"I applaud President Trump's announcement that U.S. special forces have eliminated ISIS leader Abu Bakr al-Baghdadi. The world's most wanted man has been brought to justice. The world is a safer place today," he said in a statement. "This victory for the U.S. and our many counterterrorism partners is a significant step for the campaign against ISIS, for the future of the Middle East, and for the safety of the American people and free people around the world."

At lunch on Thursday with GOP senators, Trump said he was convinced good things were coming soon on Syria -- but didn't go further than that, according to a GOP source familiar, who says it now seems to be a reference to Baghdadi.

There were additional discussions on Friday and Saturday at the White House with Trump and some in his circle about Syria, including Hill confidantes -- and an indication an announcement was coming, another GOP source said. But it's unclear how much detail they received.

In 2014, former House Speaker John Boehner pushed back against the White House's argument that it could not provide a heads up to lawmakers about a prisoner swap that freed Sgt. Bowe Bergdahl due to its sensitive nature. Boehner countered that he was briefed multiple times by the Obama administration about the raid that took down Osama bin Laden.