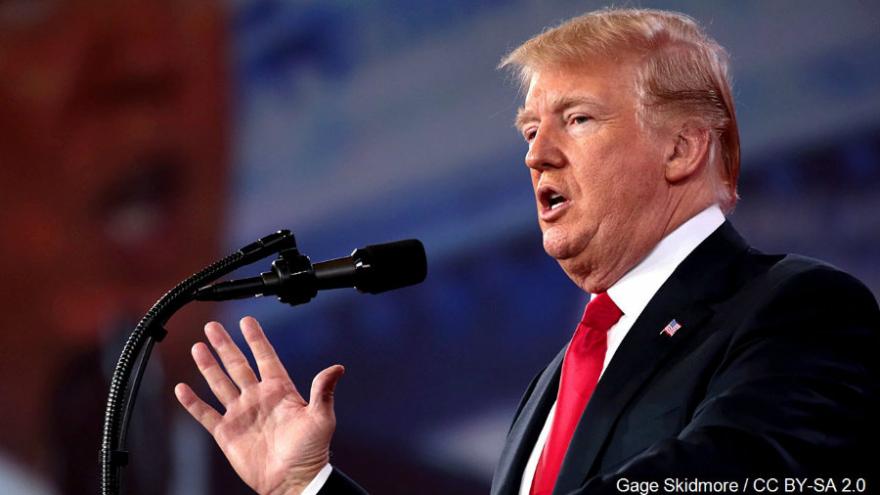 (CNN) -- President Donald Trump's visit to central Ohio on Saturday injected him into a high-stakes congressional special election where Republicans are fighting to avoid another special election defeat ahead of November's midterm election.

Republican Troy Balderson will face off against Democrat Danny O'Connor in Ohio's 12th Congressional District on Tuesday, in the final special election before November. A loss for Balderson in this district, which has historically favored Republicans, would further signal that Democrats have the momentum heading into November.

Balderson later delivered remarks next to the President. He called Trump's presence at the rally a "humbling experience" and went on to praise his economic efforts.

"Mr. President, we don't want to go back," Balderson said, adding,"I'm not tired of winning."

"If you want someone who will fight for President Trump's economic agenda, that is putting America back to work, then I need your help and I need your vote on Tuesday," he added.

A Monmouth University poll released this week shows a tight race, with Balderson receiving 44% support to O'Connor's 43%, with 11% of respondents saying they are undecided.

Trump's visit in the closing days of the campaign is a clear attempt by Republicans to rally base voters to Balderson, hoping that the President can charge turnout in the Republican-leaning district.

On Saturday morning, Trump went after Balderson's opponent by linking him to House Minority Leader Nancy Pelosi, repeating an attack that GOP ads have used to try to close the distance O'Connor has placed between himself and the Democratic leader.

"Troy Balderson, running for Congress from Ohio, is in a big Election fight with a candidate who just got caught lying about his relationship with Nancy Pelosi, who is weak on Crime, Borders & your 2nd Amendment-and wants to raise your Taxes (by a lot)," Trump tweeted. "Vote for Troy on Tuesday!

O'Connor's campaign, meanwhile, has used the visit to raise money and, in a statement to CNN, called the event Balderson's "final audition for the old club of DC politicians who are bought and paid for by special interests and party bosses."

Complicating matters for Republicans, O'Connor and the groups backing him have hammered Balderson in unison for backing the GOP-backed tax plan and argued repeatedly that the tax cuts are a serious threat to Social Security and Medicare. Should O'Connor -- a moderate, young Democrat who currently serves as the Franklin County Recorder -- beat Balderson on Tuesday, Democrats will have a model for turning the tax cuts against Republicans, taking an issue that the GOP saw as a selling point on the campaign trail and turning it into a possible liability for vulnerable Republicans.

"Take Troy Balderson. He supports giving corporations a massive tax break that helps rack up $2 trillion in debt," a narrator warns in one of the Democratic Congressional Campaign Committee's closing ads. "Balderson's plan either means cutting Medicare and Social Security, or raising taxes on our kids and grandkids."

And in a move that garnered national headlines this week, a California father suffering from ALS named Ady Barkan personally funded a six-figure ad buy targeting the special election. He, too, emphasized concerns about health care and the tax cuts. "I was shocked when the Republicans in Congress proposed a tax bill that would take away my health care to fund tax cuts for billionaires," Barkan says in the ad, describing his burgeoning activism.

Democrats have been consistent in their messaging -- running positive biographical spots about O'Connor and paeans to bipartisanship, mixed with negative ads hitting the tax bill and warning of threats to entitlement programs.

Still, Democrats haven't shied from sharp-elbowed attacks. A new ad from American Bridge released this week hammers Balderson for "refusing to tell voters if he'd support Jim Jordan for Speaker," and references allegations that Jordan knew about sexual abuse by a team doctor at a university while he served as the team's assistant coach.

Republicans, on the other hand, have eschewed more pro-tax ads for an array of attacks against the Democrat.

Republicans were airing some ads about tax reform early in the special election and recent spots have made passing mention of it. The National Republican Congressional Committee began airing an ad on July 17 that made passing reference to the plan by using O'Connor's opposition to argue he would raise "middle class taxes."

But the most frequent line of attack in the closing weeks of the campaign has been tying O'Connor to Pelosi, a unpopular figure in Republican circles.

After host Chris Matthews pushed the candidate on his opposition to Pelosi, O'Connor eventually said he "would support whoever the Democrats put forward" on the House floor.

Republicans turned to the line in the closing days of the campaign.

In one of CLF's TV ads, the group links O'Connor to Pelosi, but also to Massachusetts Sen. Elizabeth Warren, warns of "the resistance," and chides the Democrat for opposing a wall on the border with Mexico.

And in response to O'Connor's attacks against Balderson on Social Security and Medicare, the Republican campaign and National Republican Congressional Committee have moved to shore up support from senior citizens with two ads pledging to protect their energy costs and safety net programs.

"My parents raised me to work hard, help others and always tell the truth," Balderson says in a straight to camera ad sitting next to his mother. "I'm Troy Balderson and that's why I am running for Congress. And why I would never do anything to cut Social Security or Medicare."

The NRCC spot features a senior couple from Ohio warning that O'Connor "doesn't understand what it's like for folks like us" to save money, and that he isn't "safe for seniors" because of his support for energy regulations.

One reason for this strategy is that O'Connor's attacks on the two safety net programs appear to be hurting Balderson with voters older than 65. According to a Monmouth University poll released this week, Balderson only leads O'Connor by three percentage points with voters older than 65, a margin that most Republicans believe is too small to be successful in the urban, suburban and rural district.

Balderson and the outside groups, at the same time, are also looking to shore up support with the establishment wing of the state party, some of whom reject Trump, by airing an ad touting the candidate's support from Ohio Gov. John Kasich, who represented the 12th District for 18 years before becoming governor.

Still, Kasich's relationship with Balderson has been awkward, at best, since the Republican jumped into the race. Kasich held off endorsing Balderson as he ran toward Trump during the primary and general election. Kasich is one of the chief Republican critics of the President.

The governor eventually endorsed Balderson in late July, and the ad is a reflection of Balderson's concern about potential GOP defections.

O'Connor has also made a point of appealing to Kasich voters, a pitch he has made both in person and with a television ad of his own which features a voter explaining their evolving support for Kasich, Trump and O'Connor.

"John Kasich and Danny O'Connor both don't worry about the labels of Democrat, Republican. They are going to go get things done either way," the voter explains in the spot.