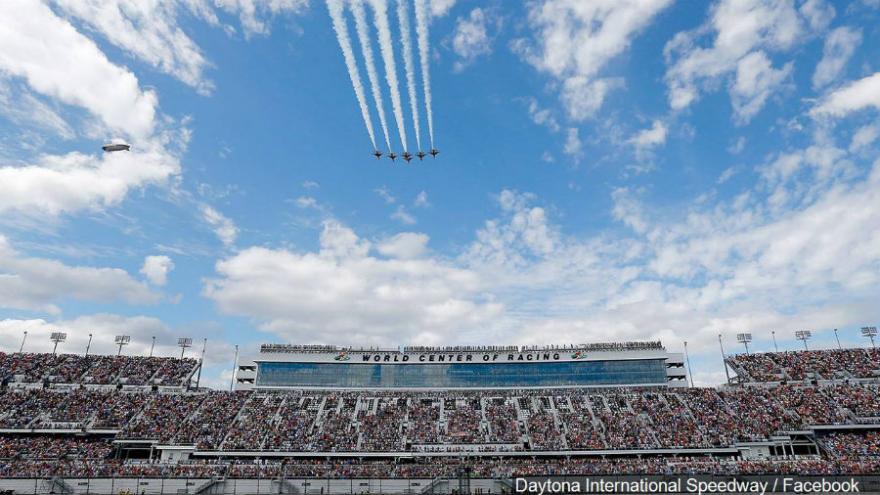 (CNN) -- President Donald Trump on Monday called NASCAR a sport for "patriotic Americans," noting that fans of the race stand for the national anthem.

"This lively sport reflects our national spirit and our can-do attitude. At every NASCAR race, you will see thousands of patriotic Americans, from the grandstands to the pit stalls, proudly waving our flag and roaring with joy at the words, 'Start your engines,'" he said at a White House event honoring NASCAR Cup Series champion Martin Truex, Jr.

"And I will tell you --one thing I know about NASCAR, they do indeed, Brian, stand for the playing of the national anthem, right," Trump continued, naming NASCAR CEO Brian France. "They do indeed. Somebody said maybe you shouldn't say that, that'll be controversial. I said, that's OK, NASCAR's not going to mind it at all. Right fellas? They don't mind it at all."

The comments come after a season of politically-charged protests during the playing of the national anthem in the National Football League that drew the ire of the President, who said players' kneeling showed "total disrespect for our great country."

At the height of the protests and resulting controversy last fall, several NASCAR team owners said they wouldn't tolerate a similar movement in their sport, a move Trump praised at the time.

Trump said Monday he was a "big fan" of NASCAR and Truex, honoring the driver and his crew on the South Lawn. Truex's car was parked on the driveway, the rope line decorated with festive black-and-white-checkered flags.

"NASCAR grew from the backroads of America's south and the bright shores of Daytona Beach -- incredible place -- to become one of the world's premier and most beloved sports. I love it, people love that sport," Trump said.