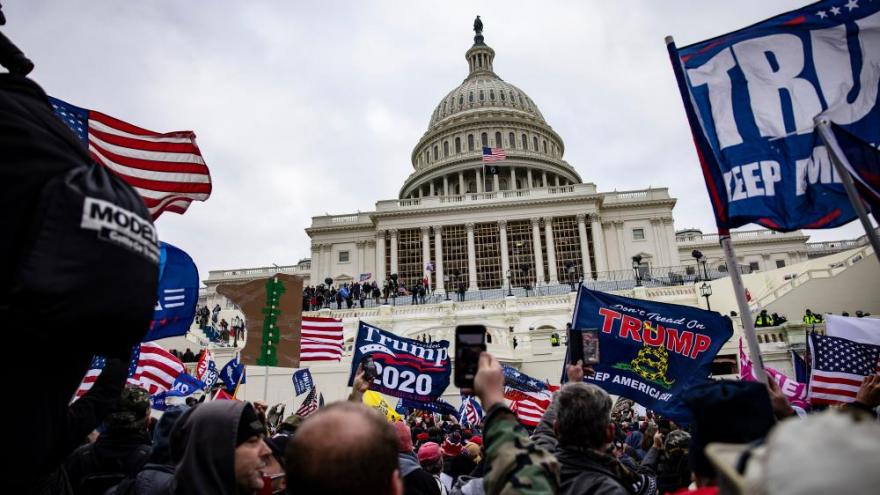 Pro-Trump supporters storm the U.S. Capitol following a rally with President Donald Trump on January 6. The Justice Department formally declined to assert executive privilege for potential testimony of at least some witnesses related to the January 6 Capitol attack.

(CNN) -- The Justice Department formally declined to assert executive privilege for potential testimony of at least some witnesses related to the January 6 Capitol attack, a person briefed on the matter said.

The decision paves the way for some former Justice Department officials to testify on what they witnessed in the chaotic days between former President Donald Trump's November election loss and early January when he tried to use the Justice Department and other means to advance false claims that he won.

Among the potential witnesses from which a special select committee investigating the January 6 insurrection is expected to seek testimony is Jeffrey Rosen, who was acting attorney general in late December and until the inauguration of President Joe Biden.

Rosen and other Justice officials were at the center of a pressure campaign by Trump and other White House officials to back his claims of vote fraud. Frustrated that the Justice Department didn't find evidence of fraud, Trump contemplated replacing Rosen with Jeffrey Clark, another Justice Department official who signaled support for the fraud claims. Rosen and a group of top Justice officials prepared to resign if Clark were made acting attorney general.

The Justice Department's decision applies to former Justice employees. Other potential witnesses that the committee may want to hear from, such as former White House officials, may be subject to a different standard under executive privilege.

An attorney for Trump didn't immediately respond to a request for comment.

The move is among two politically-sensitive matters facing Attorney General Merrick Garland this week. Later Tuesday, the Justice Department is facing a deadline to tell a federal judge whether it plans to shield Rep. Mo Brooks, who is a defendant in a lawsuit brought by Rep. Eric Swallwell over Brooks's incendiary rally speech to the pro-Trump crowd before the January 6 attack on the Capitol.

Brooks has argued that the Justice Department should take over his defense because he was acting as a member of Congress at the political rally.

Some liberals have been critical of Garland for his efforts to restore the Justice Department's institutional norms, which have included aligning with some Trump-era decisions made by the department. Among those: the Justice Department continued to defend the former President in a lawsuit brought by E. Jean Carroll, who accused Trump of sexually assaulting her and was suing the former President for defamation.

This story has been updated with additional context.