Trump on Meghan Markle: 'I didn't know that she was nasty' 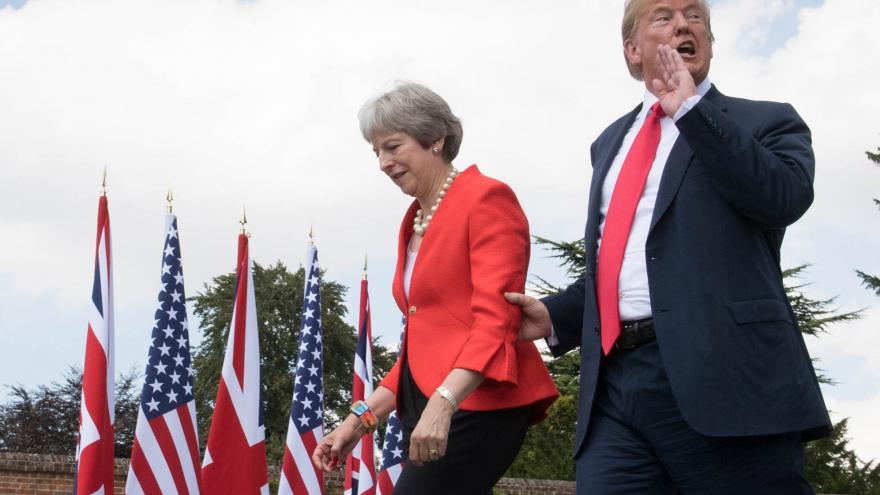 (CNN) -- President Donald Trump set the stage for his upcoming visit to the United Kingdom, Ireland and France next week during a wide-ranging interview with the British newspaper The Sun, weighing in on everything from outgoing UK Prime Minister Theresa May's handling of Brexit to the contenders vying to replace her to Meghan Markle's dislike of his politics.

May will formally step down as Conservative Party leader after Trump visits on June 7.

Trump, during his Oval Office interview with the Sun published Friday, criticized May's efforts on Brexit, saying he thinks "the UK allowed the European Union to have all the cards."

"I had mentioned to Theresa that you have got to build up your ammunition. ... I am sure that you could have built up a big advantage for your side and negotiated from strength," he said.

"And it is very hard to play well when one side has all the advantage," he continued. "They had nothing to lose. They didn't give the European Union anything to lose."

However, he acknowledged, "at the same time, I respect Theresa and she would certainly know the facts a lot better than I know them."

During his interview with The Sun, Trump was confronted by comments made by Markle, the Duchess of Sussex, ahead of the 2016 election.

Speaking on "The Nightly Show with Larry Wilmore" in 2016, Markle called Trump misogynistic and said his politics are divisive, saying she would move to Canada if he won the presidency.

Trump responded, "I didn't know that she was nasty. I hope she is OK. ..." He seemed to bury the hatchet saying, "I am sure she will go excellently (as a royal). She will be very good." Buckingham Palace had no comment on Trump's interview regarding Markle.

The US President also previewed his meeting with Prince Charles in the UK, where talks of climate change are expected.

However, despite Trump's claim, the 20th annual State of the Air report, supported by the American Lung Association, found that pollution in the US has gotten measurably worse over the last three years.

Boris Johnson and contenders to replace May

May's June resignation will trigger a party leadership contest, and once a new party leader is in place she will no longer be Prime Minister, a process that could take weeks, if not months.

The Tory leadership contest that will decide May's successor will be an internal party vote. The Conservative Party leadership will narrow it down to two candidates and then it goes to party membership.

"I think Boris would do a very good job," the President told The Sun. "I think he would be excellent." Johnson has not responded to calls from CNN regarding the matter.

Earlier this week, Trump also said he "may" meet Johnson and Nigel Farage during the trip.

The President criticized contenders such as Environment Secretary Michael Gove for accusing him of "sabre rattling" over Iran and called out Labour leader Jeremy Corbyn for not attending the Queen's state banquet, saying Corbyn is "making a mistake."