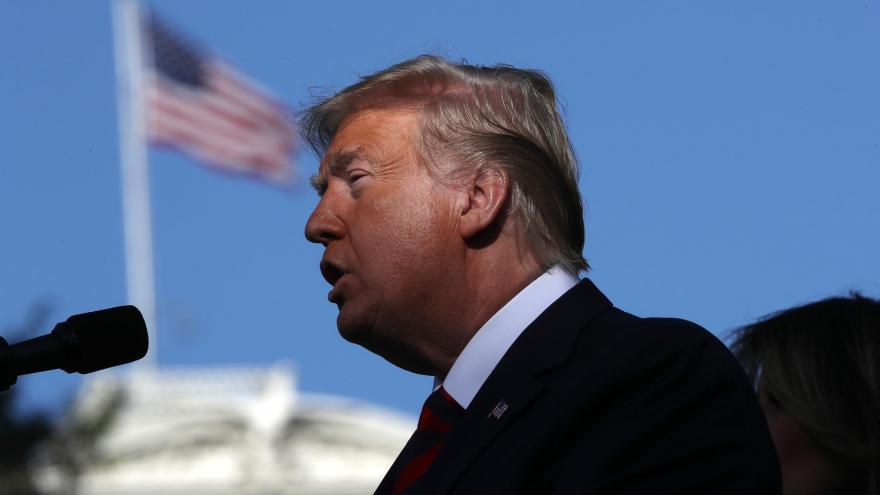 Less than half an hour after Pelosi finished her announcement, Trump tweeted a video featuring footage of several Democratic presidential candidates and notable House Democrats expressing support for impeachment proceedings.

The video then cuts to rally footage of Trump dismissing calls for his impeachment, arguing that "it's working the other way, because now we have our best poll numbers that we've ever had."

"While Democrats (sic) 'sole focus' is fighting Trump, President Trump is fighting for you," the video concludes.

The video was not a last minute project -- Trump's campaign prepared the impeachment montage video weeks ago, an official told CNN.

"We were ready in case the Democrats were that dumb," Trump campaign communications director Tim Murtaugh told CNN. "And they were."

Trump began firing back at Democrats minutes after Pelosi's press conference with a slew of attacks on Twitter.

He started with accusations that after his productive day at the United Nations summit, "Democrats purposely had to ruin and demean it with more breaking news Witch Hunt garbage."

"Pelosi, Nadler, Schiff and, of course, Maxine Waters! Can you believe this?" he said.

Trump pointed to the fact that Democrats "never even saw the transcript of the call" he had with Ukrainian President Volodymyr Zelensky in July. Trump faces outrage over reports that he pressured Zelensky to investigate Democratic presidential candidate Joe Biden's son, Hunter. There is no evidence of wrongdoing by either Joe or Hunter Biden.

He asserted that Secretary of State Mike Pompeo received permission to release the transcript from the Ukrainian government, and "they don't know either what the big deal is."

"A total Witch Hunt Scam by the Democrats!" Trump tweeted, one of his frequently used phrases hearkening back to the Mueller investigation, as well as bemoaning: "PRESIDENTIAL HARASSMENT!"

White House press secretary Stephanie Grisham later slammed House Democrats, accusing them of having "destroyed any chances of legislative progress for the people of this country by continuing to focus all their energy on partisan political attacks."

"Their attacks on the President and his agenda are not only partisan and pathetic, they are in dereliction of their Constitutional duty," she added.