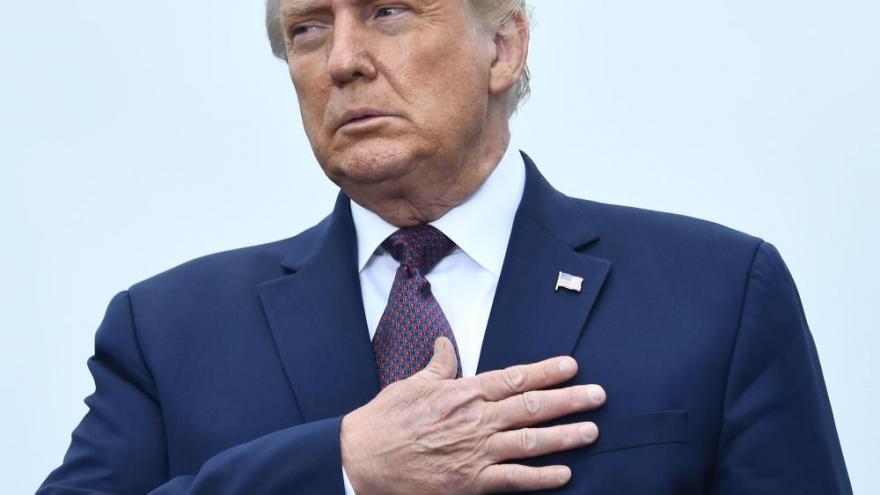 US President Donald Trump attends a ceremony commemorating the 19th anniversary of the 9/11 attacks, in Shanksville, Pennsylvania, on September 11, 2020.

(CNN) -- President Donald Trump paid tribute to the victims of the September 11th terrorist attacks at a ceremony at the site of the United Flight 93 plane crash in Shanksville, Pennsylvania.

In a solemn speech on the 19th anniversary of 9/11, Trump paid tribute to the 40 passengers and crew who died on Flight 93 as well as the rest of the nearly 3,000 people who died during the attacks.

"To every 9/11 member all across this nation, the first lady and I come to this hallowed ground, deeply aware that we cannot fill the void in your heart, or erase the terrible sorrow of this day, the agony renewed, the nightmare relived, the wounds reopened, the last treasured words played over and over again in your minds," Trump told the audience. "But while we cannot erase your pain, we can help to shoulder your burden."

The President's remarks were delivered to a largely maskless but socially distant crowd, as the country continues to battle a pandemic that's left nearly 200,000 people in the United States dead.

United Flight 93 was bound for San Francisco but was diverted when hijackers attempted to reroute the plane to attack the nation's capital, Washington, DC. Passengers and crew aboard the flight took back control of the plane when they learned of attacks at the Pentagon and in Manhattan. The plane crashed in Shanksville and all on board were killed.

Like in past 9/11 anniversary tributes, the President focused on American resilience and mostly stuck to script.

And as presidential candidates lean into the final months of their campaigns, Trump also gave a short nod to accomplishments while in office.

"America will never relent that in pursuing terrorists that threaten our people. Less than one year ago, American warriors took out the savage killer and leader of ISIS, (Abu Bakr) Al-Baghdadi," Trump said. Soon after our warriors ended the brutal reign on the Iranian butcher who murdered thousands of American service members, the world's top terrorist. Qassem Soleimani is dead."

Trump previously paid tribute to the passengers on United Flight 93 in 2018. In 2017 and 2019, he attended memorial ceremonies at the Pentagon.

Unlike past 9/11 anniversaries while in office, the President did not launch into early morning Twitter tirades against his political enemies. But Trump, eager to get the country back to work amid the coronavirus pandemic, did misleadingly congratulate JP Morgan Chase for "ordering everyone BACK TO OFFICE" before his Pennsylvania visit.

So far, a person familiar with the bank's plans says that JP Morgan Chase is only ordering senior managers back into the office after months of remote work.

The morning also marked a rare in-person crossover between the Biden campaign and the Trump campaign.

Both former Vice President Joe Biden and current Vice President Mike Pence attended a 9/11 memorial ceremony in Manhattan, where they were spotted exchanging a brief, friendly greeting with their spouses. Biden and second lady Karen Pence shared an elbow bump.

Biden is also slated to deliver remarks in Shanksville later in the day.

Before the day's end, Trump will bestow the Medal of Honor on an Army sergeant who conducted a nighttime hostage rescue in Iraq in 2015.