Trump promised a health care plan before the end of August. It never came. 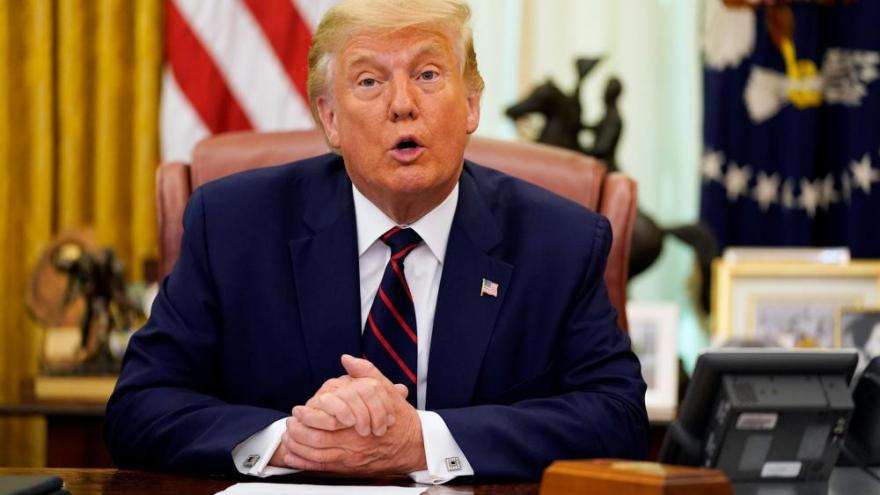 President Donald Trump has long promised to release a health care plan that could replace Obamacare, but with just two months to go until the election, he has yet to do so, with his latest self-imposed deadline passing without a plan.

(CNN) -- President Donald Trump has long promised to release a health care plan that could replace Obamacare, but with just two months to go until the election, he has yet to do so, with his latest self-imposed deadline passing without a plan.

In an August 3 press briefing, Trump said his health care plan would most likely be released before the end of the month. But August came and went and the President never released a plan. It marks the latest instance of Trump promising an Obamacare solution that never came.

"I do want to say that we're going to be introducing a tremendous health care plan sometime prior -- hopefully, prior to the end of the month. It's just completed now," Trump said at the time. "We'll be doing, sometime during this month, the health care plan. And I think that'll be before the end of the month. And I think it'll be very impressive to a lot of people."

In an interview with Fox News in July, Trump said he would be signing a "full and complete health care plan" within two weeks.

"We're signing a health care plan within two weeks, a full and complete health care plan that the Supreme Court decision on DACA gave me the right to do," Trump said during that interview on July 19.

The President also said on August 7 that he was pursuing an executive order that would require health insurance companies to cover pre-existing conditions.

No such order was signed.

Asked about these plans, the White House did not provide specifics in a statement Saturday evening.

"President Trump recently issued several executive orders to lower the cost of prescription drugs, including making insulin and EpiPens available at low cost to low-income Americans. There will be more action to come in the coming weeks," deputy press secretary Sarah Matthews said in the statement.

The President has blown through other deadlines he himself has set.

After a slew of defeats at the Supreme Court over the summer, the President promised he would release a list of nominees for the high court by September 1. That list was never released.

"I will be releasing a new list of Conservative Supreme Court Justice nominees, which may include some, or many of those already on the list, by September 1, 2020," Trump tweeted in June. "If given the opportunity, I will only choose from this list, as in the past, a Conservative Supreme Court Justice... Based on decisions being rendered now, this list is more important than ever before (Second Amendment, Right to Life, Religious Liberty, etc.) -- VOTE 2020!"

White House press secretary Kayleigh McEnany said during a press briefing Thursday that the list of possible justices would be released "within the next few weeks."

"You will see it soon, certainly within the next few weeks, but it will be after the Labor Day weekend," she said.

Trump has also said he would release an immigration plan sometime in September.