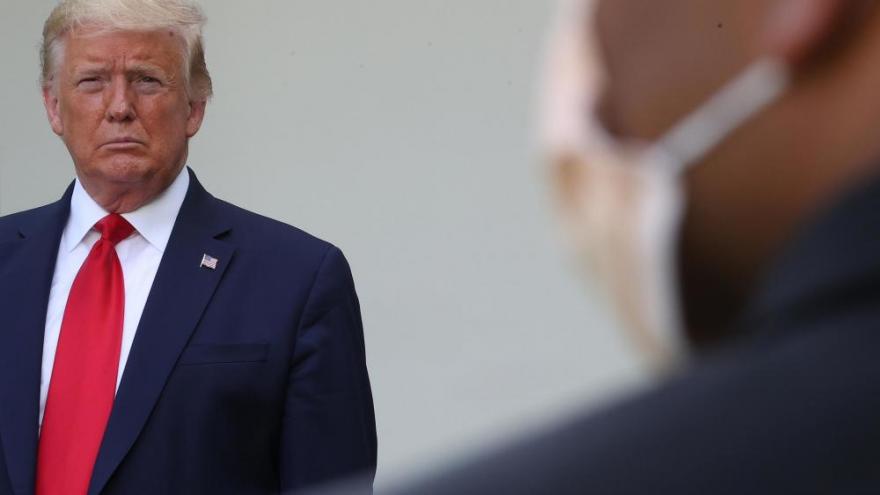 U.S. President Donald Trump participates in an event on protecting seniors with diabetes, in the Rose Garden at the White House on May 26, 2020 in Washington, DC. The United States is closing in on 100,000 deaths in less than four months caused by the coronavirus.

(CNN) -- President Donald Trump said Tuesday he was signing a bill and executive order punishing China for its actions in Hong Kong.

He also said he held Beijing responsible for concealing coronavirus at the start of a now global pandemic and "unleashing it upon the world."

At the start of July, the US Senate approved a final version of legislation that would punish China for moves that lawmakers fear will crush democratic freedoms in Hong Kong.

The measure would impose sanctions on businesses and individuals that help China restrict Hong Kong's autonomy. It was approved by unanimous consent and has been awaiting Trump's signature.

"Hong Kong will now be treated the same as mainland China," he said. "No special privileges, no special economic treatment and no export of sensitive technologies."

The announcements came during a late-afternoon Rose Garden event that was added to the President's schedule a few hours earlier. It was billed as a "press conference," though previously the White House has advertised events as press conferences only to have Trump depart without taking questions.

The President has faced growing pressure to adopt a tougher stance on China as the country exerts new control over Hong Kong and as its handling of the coronavirus comes under scrutiny.

The issue has become a leading election year topic as Trump and his rival Joe Biden each attempt to paint the other as weak in the face of aggression from Beijing. Both sides have used the issue in campaign ads.

Trump has stated he is unhappy with the country but that he's not yet planning to scrap the trade agreement he struck with Chinese President Xi Jinping last year.

On Monday, Secretary of State Mike Pompeo announced a formal rejection of "most" of China's maritime claims in the South China Sea, the latest in the escalation between Washington and Beijing.

Last week, the Trump administration took action against Chinese officials for their involvement in human rights abuses in the Xinjiang region, where Uyghur Muslims and other minority groups have been detained and tortured.

And two weeks ago, the administration announced visa restrictions on current and former Chinese officials who it says "were responsible for eviscerating Hong Kong's freedoms."