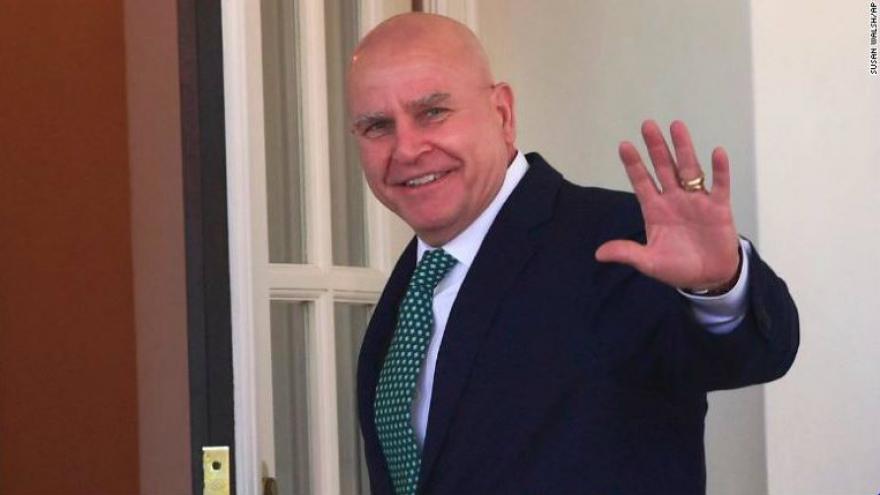 By Zachary Cohen and Nicole Gaouette

(CNN) -- National security adviser H.R. McMaster has agreed to resign and will be replaced by former US ambassador and Fox News analyst John Bolton, President Donald Trump announced in a tweet on Thursday.

"I pleased to announce that, effective 4/9/18, @AmbJohnBolton will be my new National Security Advisor. I am very thankful for the service of General H.R. McMaster who has done an outstanding job & will always remain my friend. There will be an official contact handover on 4/19."

"The two have been discussing this for some time. The timeline was expedited as they both felt it was important to have the new team in place, instead of constant speculation," a White House official said. "This was not related to any one moment or incident, rather it was the result of ongoing conversations between the two."

"After 34 years of service to our nation, I am requesting retirement from the U.S. Army effective this summer after which I will leave public service. Throughout my career it has been my greatest privilege to serve alongside extraordinary servicemembers and dedicated civilians," McMaster said in a statement released by the White House.

"I am thankful to President Donald J. Trump for the opportunity to serve him and our nation as national security advisor. I am grateful for the friendship and support of the members of the National Security Council who worked together to provide the President with the best options to protect and advance our national interests," the statement said.

Bolton's hard edged, hawkish views on issues like North Korea, Iraq and Syria make him a controversial pick to become the next national security adviser -- particularly considering that talks with North Korea may soon be possible.

Early in the Trump administration Bolton -- a stalwart of several Republican administrations -- was considered as a possible secretary of state and since then has made visits to the West Wing every few months to discuss foreign policy and national security.

A source familiar with those meetings said the two have spent more time recently getting to know each other, discussing Bolton's views and getting a better sense of each other.

Amid speculation about McMaster's fate CNN has reported that the three-star general has been in discussions with the Hoover Institution.

As recently as March 8, the White House was denying reports that McMaster was on his way out, with spokeswoman Sarah Sanders declaring on "Fox & Friends" that "General McMaster's not going anywhere."

CNN reported earlier this month that the Pentagon has also been considering options that would allow the President to potentially move McMaster out of his current role and back into the military, according to half a dozen defense and administration officials.

And the Pentagon had been quietly looking to see if there is a four-star military job suited for McMaster, these officials said.

But McMaster's announced retirement from the military this summer would mean he wouldn't receive his fourth star.

Several sources told CNN that the decision came after months of personal tension between McMaster and Trump.

Trump has privately expressed irritation with McMaster stemming from differences in "personality and style," a senior Republican source said.

The two have never gotten along, and Trump continues to chafe at McMaster's demeanor when he briefs him, feeling that he is gruff and condescending, according to a source who is familiar with his thinking.

Sources with knowledge of McMaster's standing in the White House had repeatedly said that he was on thin ice.

There was discussion in the West Wing about replacing him last fall, but he ultimately survived because officials, including the President himself, were skeptical about the optics of appointing a third national security adviser in less than a year, several sources told CNN. Trump's first national security adviser, Michael Flynn, resigned amid controversy over his contact with Russian officials within a month of taking the job.

McMaster was also retained at the time because of the White House's challenge attracting top talent for jobs in the administration due to Trump's "blacklist" of individuals who have criticized the President, his personality and the Russia investigation, according to a senior Republican source.