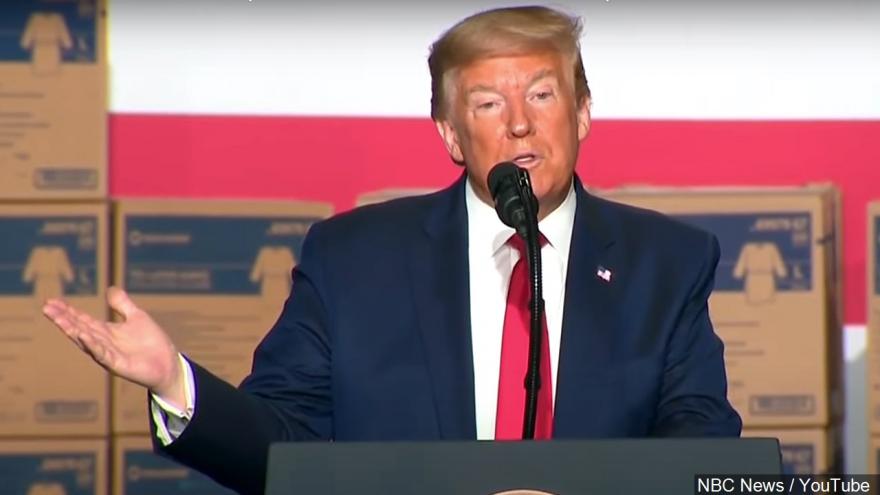 (CNN) -- On the heels of studies showing hydroxychloroquine doesn't help patients in the hospital with Covid-19, a new study -- the first of its kind -- shows the drug doesn't work to prevent infection with the virus, either.

President Trump said he took hydroxychloroquine last month, shortly after he found out that his personal valet had been diagnosed with the coronavirus.

The University of Minnesota study has been covered in the media over the past few months, and Dr. David Boulware, the author of the new study, says the president's physician sent him an email on May 9, seeking his opinion about taking the drug preventatively, and asking about the results of the study and the dose the study subjects were taking.

Boulware says he advised Trump's physician that there was no published research showing hydroxychloroquine worked preventatively and shared that the people in his study who took hydroxychloroquine had higher rates of side effects, mostly gastrointestinal problems such as nausea and vomiting.

"I knew they were probably going to ignore what I said because the White House had been talking about hydroxychloroquine for weeks and weeks and weeks," said Boulware, an infectious disease expert and professor of medicine at the University of Minnesota.

The study was published Wednesday in the New England Journal of Medicine.

No difference between hydroxychloroquine and placebo

The University of Minnesota study is a double-blind randomized clinical control trial, considered the gold standard in medicine.

Starting in mid-March, Boulware and his colleagues recruited 821 people in the US and Canada who had been exposed to Covid-19. Some were health care workers and others lived in the same house as someone with the virus. The median age was 40.

The researchers then monitored the study subjects for two weeks.

In the end, it didn't matter if they received the drug or not: about 12% of those taking hydroxychloroquine came down with symptoms of Covid-19, compared to about 14% of those taking the placebo, a difference that was not statistically significant.

In both groups, most of the patients did not receive a Covid-19 diagnostic test, since at the time of the study, such tests were in short supply. Instead, four physicians involved with the study reviewed the study subjects' symptoms to see if they were compatible with a Covid diagnosis.

Among the patients taking hydroxychloroquine, 40% reported a side effect, compared to 17% of those who took the placebo. Nausea, upset stomach, and diarrhea were among the most common side effects, and none of the side effects were considered serious, according to the study.

Boulware said his story underscores the need to study drugs to find out if they work in particular situations.

"Even in the setting of a pandemic, we need research to help inform the best practice for what works in humans," said Boulware, senior author of the study.

This won't be the last word on hydroxychloroquine as prevention against Covid-19. Researchers at New York University and the University of Washington and elsewhere are also studying whether hydroxychloroquine might help people who have been exposed to the virus fight off a Covid infection.

The University of Minnesota team is studying whether hydroxychloroquine could work earlier on, to prevent infection in people who have not had an exposure.

"Maybe if they take the drug before they're exposed, before the infection has had time to set up shop, it could have an effect at preventing disease," he said.

His team is also looking to see whether the drug might help people with early symptoms of Covid-19 from becoming so sick that they end up in the hospital.

"You don't know until you do the clinical trial," he said.