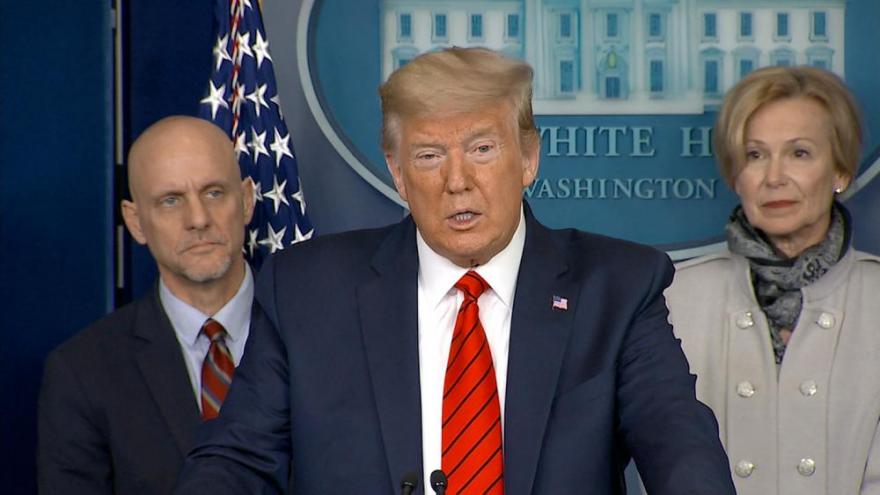 President Donald Trump says he's pushed the Food and Drug Administration to eliminate barriers to getting therapeutics for coronavirus to patients.

(CNN) -- President Donald Trump says he's pushed the Food and Drug Administration to eliminate barriers to getting therapeutics for coronavirus to patients.

He said a drug currently used as an antimalarial -- hydroxychloroquine -- would be made available almost immediately to treat coronavirus.

"It's been around for a long time so we know if things don't go as planned it's not going to kill anybody," Trump told reporters at the White House.

"We have to remove every barrier or a lot of barriers that were unnecessary and they've done that to get the rapid deployment of safe, effective treatments and we think we have some good answers," Trump said.

"The FDA is committed to continuing to provide regulatory flexibility and guidance, but let me make one thing clear: the FDA's responsibility to the American people is to ensure that products are safe and effective," he said.

He said the FDA is expanding its work regarding potential therapeutic options.

Part of that, Hahn said, is exploring drugs that are "already approved for other indications," noting the President's remarks on chloroquine.

"That's a drug that the President has directed us to take a closer look at as to whether an expanded use approach to that could be done and to actually see if that benefits patients. And again, we want to do that in the setting of a clinical trial, a large, pragmatic clinical trial to actually gather that information," he said.

He also explained the process of convalescent plasma, which has to do with isolating blood from those who have survived the coronavirus and have the right immunoglobulins. A concentration of that could treat people infected with the virus.

As for a timeline, Hahn said, "over the next couple of weeks, we'll have more information that we're really pushing hard to try to accelerate... and that will be a bridge to other therapies that will take us three to six months to develop. And this is a continuous process -- there is no beginning and end."

He also said there is a vaccine trial currently being performed that is expected to take "12 months."

Early evidence from human cells suggests that chloroquine -- which is used to treat malaria and autoimmune diseases -- may have some activity against the novel coronavirus. Doctors in China, the US and other countries have used the drug experimentally in Covid-19 patients, but there is not yet sufficient clinical evidence that it's effective in humans.

The drug, generally considered to be safe for most patients, can have side effects including seizures, nausea, vomiting, deafness, vision changes and low blood pressure.

When asked about chloroquine last month, Dr. Janet Diaz of the World Health Organization said "there is no proof that that is an effective treatment at this time. We recommend that therapeutics be tested under ethically approved clinical trials to show efficacy and safety."

At the time, she said the drugs that were being prioritized by WHO's research and development efforts were antivirals, a separate type of drug that includes remdesivir, which is also the focus of clinical trials in China and the US.

Following Trump's announcement on Thursday, CNN's Chief Medical Correspondent Dr. Sanjay Gupta said it was important to "exert a little bit of caution" when hearing about the drugs being looked at to treat coronavirus.

"Everybody wants to be hopeful," he told CNN's John King on "Inside Politics," "but we've got to exert a little bit of caution when hearing about these types of drugs. They have to be trialed like everything else."

Gupta added that "the scientific community is always at that inflection point of hope and honesty, but we have to be honest here -- we just don't know enough and I don't want people to get a false hope here."

This story has been updated to include additional details and reaction.