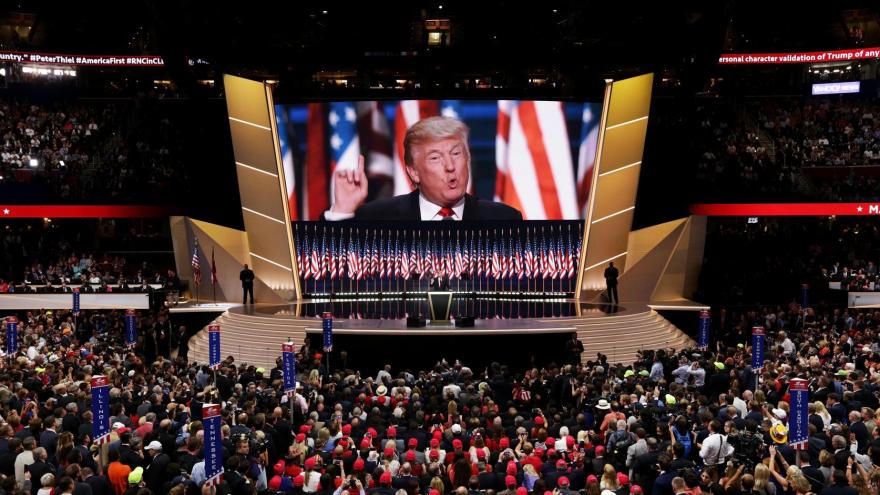 North Carolina Gov. Roy Cooper is holding firm on his demand that GOP leaders provide him with plans for a scaled down GOP convention, even as Republican officials start scouting locations to move the August event.

The Republican National Committee, because of contractual agreements, will still be required to hold some formal portion of the convention in Charlotte. But the performative aspects of the convention, including the President's speech, will happen in another city.

"The night the President accepts the nomination will not happen in Charlotte," an RNC official tells CNN.

Two sources with knowledge cautioned that it appears the decision isn't final. But the sources say there have been tense conversations in the last 48 hours between the RNC and the governor's office ahead of Trump's self-imposed deadline, which is Wednesday.

The apparent move comes after tense negotiations between Republican officials and officials from North Carolina Gov. Roy Cooper's office. Trump, over the last two weeks, started to target Cooper over the convention drama, a strategy that Republicans have said looks to turn the Democratic governor into a scapegoat should the convention not be able to go off as planned due to coronavirus.

Trump said Tuesday in a tweet that the GOP will be "forced" to find a new state to host their convention as Cooper stands by his demand that party leaders provide him with plans for a scaled down event amid coronavirus concerns.

Cooper, the President tweeted, "is still in Shelter-In-Place Mode, and not allowing us to occupy the arena as originally anticipated and promised. Would have showcased beautiful North Carolina to the World, and brought in hundreds of millions of dollars, and jobs, for the State."

"Because of @NC_Governor, we are now forced to seek another State to host the 2020 Republican National Convention," he said.

The plan now is to have Trump's speech and some other events in another city.

"Due to the directive from the governor that our convention cannot go on as planned as required by our rules, the celebration of the President's acceptance of the Republican nomination will be held in another city," another Republican official said. "Should the governor allow more than 10 people in a room, we still hope to conduct the official business of the convention in Charlotte."

Officials from the RNC are considering Nashville, Las Vegas, Orlando, Jacksonville and venues in Georgia to host their August convention if they fail to reach a deal with officials in North Carolina, two Republicans familiar with the planning tell CNN.

"We're contractually obligated to go to Charlotte," one official explained, noting that the "business of the convention" must happen in that city. But since that is not formally defined, RNC officials are working to determine what portion of the convention must still occur in Charlotte.

This official notes that this is happening as a direct result of Cooper's latest letter, in which he says the RNC should plan for "a scaled-down convention with fewer people."

"We are scaling down because he is telling us to," the official said.

Cooper wrote in a letter to Republican National Committee Chairwoman Ronna McDaniel and Convention CEO Marcia Lee Kelly that he would like to continue the conversation with organizers, but unless they offer up a much different plan, the chances of Charlotte being able to host the August event are "very unlikely."

Following Trump's tweet, Cooper said it was "unfortunate" no deal was made.

"We have been committed to a safe RNC convention in North Carolina and it's unfortunate they never agreed to scale down and make changes to keep people safe. Protecting public health and safety during this pandemic is a priority," Cooper said on Twitter.

The contingency planning is to the point where party officials plan to travel to Nashville later this week to scout possible venues, the sources said, and may travel to other sites in the near future. Both Nashville and Las Vegas were prospective host cities before Republicans officially picked Charlotte.

Chairwoman McDaniel acknowledged in a statement after Cooper's letter that Republicans are scouting alternative locations.

"We hope to still conduct the business of our convention in Charlotte, but we have an obligation to our delegates and nominee to begin visiting the multiple cities and states we have reached out to in recent days about hosting an historic event to show that America is open for business," she says in the statement.

McDaniel also accused Cooper of "dragging his feet" on providing planners with guidance.

Prior to Cooper's response, Michael Ahrens, a spokesman for the Republican National Committee, said, "As we have said all along, we are committed to holding our convention in Charlotte, but we are still waiting for Governor Cooper to confirm that the convention we originally contracted can still be held there."

The planned trips, which were first reported by Politico, are a clear attempt by Republicans to show they are serious about pulling out of the Charlotte convention.

Despite the pressure, Cooper, who is up for reelection in November, has not moved from his position that the state of the pandemic will dictate whether Republicans are able to fully gather in Charlotte.

"We're talking about something that's going to happen three months from now, and we don't know what our situation is going to be regarding Covid-19 in North Carolina," Cooper said last week. "We'd like to reach a resolution that everyone can be reasonable about that puts public health, safety, the science and the facts as the number one thing we're trying to do here."

Cooper's office did not immediately respond to questions from CNN about the planned scouting trips.

Where Republicans have been set on holding a largely unchanged, in-person convention, Democrats have been open about the possibility the event could be significantly changed or entirely virtual. Their Milwaukee convention was moved from mid-July to mid-August due to coronavirus concerns in April.

This story and its headline have been updated with additional developments Tuesday night.