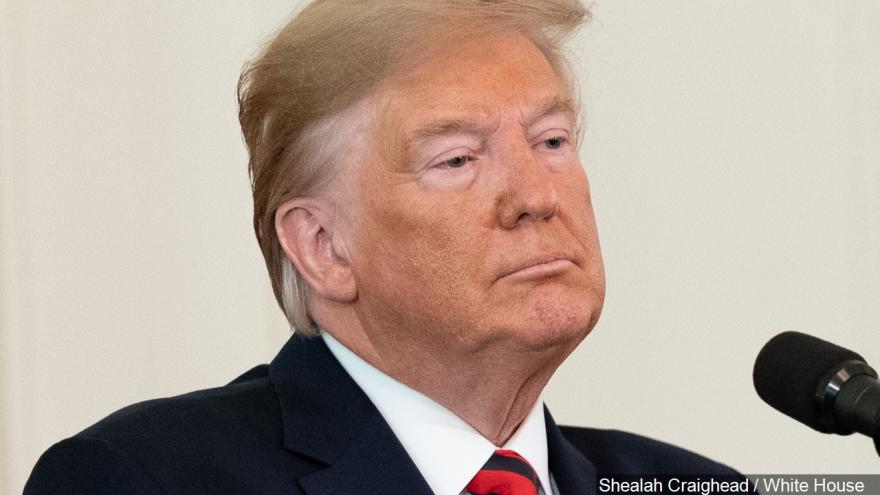 WASHINGTON (AP) — President Donald Trump said Sunday that he spoke to Ukraine's new president about his summer election and the fact that "we don't want our people, like Vice President Biden and his son" contributing to corruption already happening in the Eastern European nation.

Trump appeared to stop just short of acknowledging that he discussed potential Democratic presidential rival Joe Biden and Biden's son, Hunter, with Ukrainian President Volodymyr Zelenskiy, during a July 25 telephone conversation that is now the basis of a whistleblower complaint against the president.

"The conversation I had was largely congratulatory, was largely corruption, all of the corruption taking place," Trump said before departing on a trip to Texas and Ohio. "Was largely the fact that we don't want our people, like Vice President Biden and his son, creating to the corruption already in the Ukraine."

"Ukraine's got a lot of problems," he added. "The new president is saying that he's going to be able to rid the country of corruption and I said that would be a great thing. We had a great conversation. We had a conversation on many things."

A person familiar with the matter has told The Associated Press that Trump urged Zelenskiy to investigate Hunter Biden, who worked for a Ukrainian gas company. The person wasn't authorized to discuss the issue publicly and spoke on condition of anonymity.

The president also seemed to suggest that his assurances that he behaved appropriately during the call should be enough to satisfy critics.

The White House did not immediately respond to a request to clarify the president's comments referencing the Bidens.

After arriving in Texas , Trump told reporters he will look into releasing details or a transcript of the call, but stressed that foreign leaders don't want things like that to be made public and that they should feel free to speak frankly with a U.S. president without concerns about later disclosure. Trump said that if Ukraine released its own transcript, it would be same as his version of the call.

Trump and Zelenskiy plan to meet on the sidelines of the U.N. General Assembly later this week.

The president has described the whistleblower as a "partisan" but has acknowledged not knowing the identity of the intelligence official who lodged a formal complaint against him with the inspector general for the intelligence community.

The complaint was based on a series of events, including the July 25 call between Trump and Zelenskiy, according to two people familiar with the matter. They were not authorized to discuss the issue by name and were granted anonymity.

According to one of the people, who was briefed on the call, Trump urged Zelenskiy to probe the activities of Hunter Biden. Trump did not raise the issue of U.S. aid to Ukraine, indicating there was not an explicit quid pro quo, according to the person.

Biden said in Iowa on Saturday that "Trump deserves to be investigated" for "trying to intimidate a foreign leader, if that's what happened." Biden said Trump was motivated by politics "because he knows I'll beat him like a drum."

There has been no evidence yet of wrongdoing by Biden or Hunter Biden regarding Ukraine.

Michael Atkinson, the U.S. government's intelligence inspector general, has described the whistleblower's Aug. 12 complaint as "serious" and "urgent," but he has not been allowed to turn over the complaint to Congress, a move that he created a fresh clash between the government's executive and legislative branches.

It also has raised questions about whether Joseph Maguire, the acting director of national intelligence and Atkinson's superior, is working with the Justice Department to protect the president.

Maguire has refused to discuss details of the whistleblower complaint, but he has been subpoenaed by Schiff's committee and is expected to testify publicly on Thursday. Maguire and Atkinson also are expected to appear before the Senate Intelligence Committee this week.

Democrats say the administration is legally required to give Congress access to the complaint. The chairman of the House Intelligence Committee, Rep. Adam Schiff, D-Calif., has said he will go to court in an effort to get it if necessary.

Schiff argued Sunday that Trump is pushing Democrats closer to seeking his removal from office if the newest allegations are proven.

"After having sought foreign assistance and welcomed foreign assistance in the last presidential campaign as a candidate, he is now doing the same thing again, but now using the power of the presidency, then he may force us to go down this road," Schiff said on CNN's "State of the Union."

Schiff said he's spoken with a number of colleagues, who agree the actions Trump allegedly committed seem "different in kind."

"And we may very well have crossed the Rubicon here," he said.