Trump says he told his people too much coronavirus testing puts US at 'disadvantage,' contradicting staff 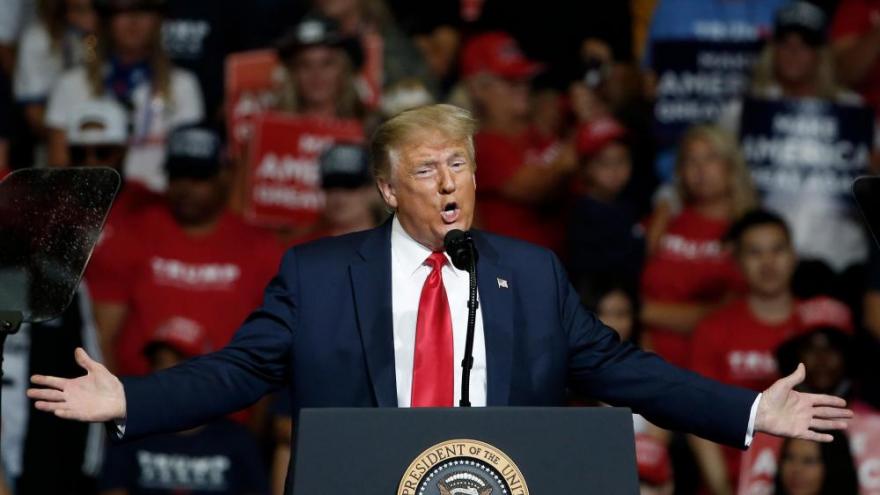 President Donald Trump says that though he never gave an order to slow down testing, he really did tell his people that the United States would look better if fewer coronavirus tests were performed.

(CNN) -- President Donald Trump says that though he never gave an order to slow down testing, he really did tell his people that the United States would look better if fewer coronavirus tests were performed.

That explanation of his Saturday night rally comment comes after several White House officials asserted that the President was speaking "in jest" when he told supporters this past weekend that he had told members of the administration to slow down coronavirus testing.

"I said to my people, 'Slow the testing down please,' " he said.

Soon after Trump made the comment, White House officials asserted that the President was joking.

But in an interview with CBN News that aired Monday evening, Trump said he told his "people" -- presumably his staff or Cabinet members -- about his perceived "disadvantage" to expanded coronavirus testing, adding that he never ordered testing levels be lowered.

In the interview with CBN News, Trump was asked directly if he told his administration to slow down testing, as he said at his rally in Tulsa, Oklahoma, on Saturday night.

"No," he answered, "but I think we put ourselves at a disadvantage, I told my people. I said, 'We've gotten so good at testing ... We test much more than any other nation,' so you hear about all these cases."

"So, instead of 25 million tests, let's say we did 10 million tests. We'd look like we were doing much better because we'd have far fewer cases. You understand that," Trump told CBN. "I wouldn't do that, but I will say this: We do so much more than other countries it makes us, in a way, look bad but actually we're doing the right thing."

Trump also said his comment in Tulsa was "semi-tongue in cheek" and asserted that "when you do more testing you find more cases."

"We have kids, with sniffles, and all of the sudden we report a case and they're in no danger whatsoever," the President added.

Multiple health experts have told CNN that the increased number of coronavirus cases has less to do with more testing and more to do with there actually being more cases. And though the US may have conducted the most coronavirus tests compared to any other country, it has lagged behind in testing per capita.

Earlier Monday, White House press secretary Kayleigh McEnany told reporters during a press briefing that Trump was speaking "in jest" and "in passing" at the rally.

"He has not directed (coronavirus testing to be slowed), and, in fact, I would note that first we continue to test about 500,000 per day, about half a million people per day," McEnany said. "$1.8 billion dollars is invested in NIH to find new testing capabilities, any suggestion that testing has been curtailed is not rooted in fact."

"It was a comment that he made in jest," McEnany added.

White House trade adviser Peter Navarro similarly said that Trump was joking. And Vice President Mike Pence said on a Monday call with governors that the remark was "a passing observation," a person familiar with the call told CNN.

Earlier Monday, Trump did not directly answer when asked by a Scripps reporter if he had requested to pare back testing.

"If it did slow down, frankly, I think we're way ahead of ourselves if you want to know the truth," Trump said. "We've done too good a job."

This story has been updated with additional context.